Over the past five trading days, telecom stocks gradually trended down as uncertainty crept in with the United States and China blaming each other for the origin of the coronavirus pandemic. As the industry aims to rebuild with various states slowly reopening their economies by easing certain restrictions, the diplomatic tensions fueled doubt and indecision about how early normalcy would be restored. The relatively healthy quarterly earnings performance by the industry participants was also marred by the feud as the world lacked consensus and people seemed to have a divided opinion regarding the origin of the deadly virus. A report from Counterpoint Research, which revealed that smartphone sales in the United States declined 21% year over year in the first quarter of 2020, driven by store closures and stay-at-home orders owing to the virus outbreak, further acted as a dampener.

Per one of the notable developments during the past week, the U.S. Department of Commerce is reportedly close to framing new guidelines that would allow domestic firms to work in unison with China-based telecommunications equipment manufacturer, Huawei, in setting the industry standards for 5G network. The U-turn in the telecom policy, since placing Huawei in the ‘Entity List’ in May last year, was largely driven by the incapability of U.S. engineers to raise their voices in global standards setting meetings, where protocols and technical specifications are developed. This, in turn, helped Huawei to gain a stronger voice on the global platform and negated U.S. competitiveness. The Trump administration is now aiming to undo this and offer the U.S. firms a level playing field.

Meanwhile, the United States had signed a joint declaration with the Czech Republic to boost bilateral cooperation on next-generation 5G networks. It also aims to promote stringent measures in order to evaluate whether suppliers were subject to undue foreign influence, have transparent ownership and honor intellectual property rights. Such steps seem to be the need of the hour to weed off various sector malaises and encourage the use of open interfaced, standards-based, interoperable 5G networks.

1.     Despite a challenging macroeconomic environment triggered by the coronavirus pandemic, Qualcomm Incorporated (QCOM - Free Report) reported second-quarter fiscal 2020 results, with healthy year-over-year top-line growth, primarily driven by the ramp-up in 5G-enabled chips. In addition, both top and bottom-line figures beat the Zacks Consensus Estimate, backed by the strength of the business model and the ability to respond pro-actively to the evolving market scenario.

Quarterly non-GAAP net income came in at $1,015 million or 88 cents per share compared with $932 million or 77 cents in the year-ago quarter. The bottom line was at the midpoint of management’s guidance and beat the Zacks Consensus Estimate by 9 cents. On a GAAP basis, total revenues in the fiscal second quarter were $5,216 million compared with $4,982 million in the prior-year quarter. The figure surpassed the consensus mark of $5,094 million and was near the midpoint of the company-guided range, driven by 5G strength, high-performing core chipsets and new RF front-end content.

2.      Arista Networks, Inc. (ANET - Free Report) reported mixed first-quarter 2020 results, wherein both top and bottom lines surpassed the Zacks Consensus Estimate. However, it reported lower revenues year over year due to muted demand in the cloud business, led by the adverse impact of the coronavirus pandemic.

Quarterly non-GAAP net income came in at $161.7 million or $2.02 per share compared with $187.7 million or $2.31 in the year-ago quarter. The bottom line beat the consensus mark by 23 cents. Quarterly total revenues decreased 12.2% year over year to $523 million and were near the lower end of the company’s guidance of $522-$532 million, due to operational challenges triggered by irregular raw-material supply and manufacturing constraints, driven by the virus outbreak. The top line, however, surpassed the Zacks Consensus Estimate of $513 million.

Net loss for the March quarter was $0.9 million, narrower than a loss of $25 million in the prior-year quarter. The improvement can be attributed to higher operating income, lower interest expenses, gains on derivative contracts as well as the absence of loss on extinguishment of debt and write-off of deferred financing costs. The bottom line missed the Zacks Consensus Estimate by 11 cents. First-quarter total revenues increased 2.2% year over year to $2,450.3 million, driven by record Broadband revenue growth of 14.2%. However, the top line lagged the consensus mark of $2,464 million.

Quarterly non-GAAP net earnings were $3.2 million or 3 cents per share compared with $11.8 million or 13 cents in the prior-year quarter. The bottom line surpassed the Zacks Consensus Estimate by a penny. Quarterly revenues declined 9.3% to $163.1 million, in line with the company’s updated accounting guidance. The year-over-year decline was mainly caused by lackluster audio sales, partially offset by robust sales of Precision Device solutions. However, the top line met the Zacks Consensus Estimate. 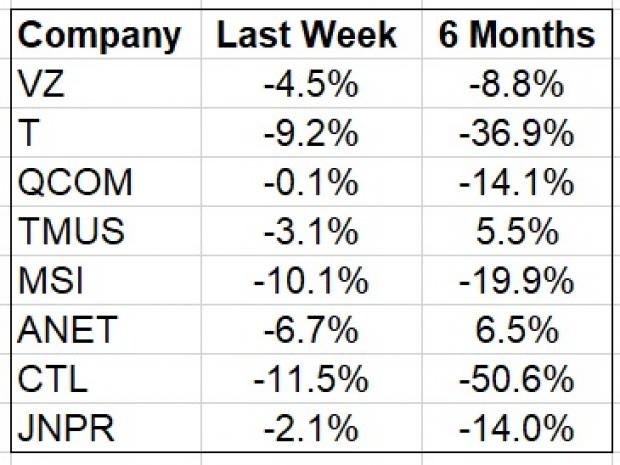 In the past five trading days, none of the stocks gained, while CenturyLink has been the biggest decliner with its stock decreasing 11.5%.

Over the past six months, the Zacks Telecommunications Services industry declined 17.9%, while the S&P 500 recorded an average loss of 7.6%. 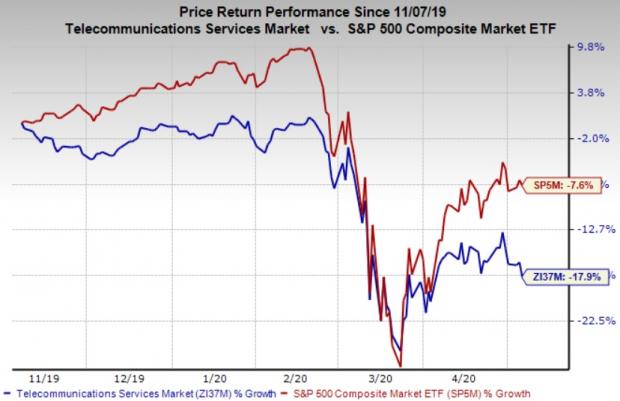 In addition to product launches, deals and 5G deployments, all eyes will remain glued to the remaining earnings releases and how the administration attempts to handle the overall situation in order to restore normalcy.