Amerisafe, Inc. (AMSF - Free Report) has been exhibiting a strong operating performance, reflected by stronger-than-expected underwriting results for the past many years. This uptrend was driven by a favorable prior-year reserve development. The company’s operational efficiency bodes well after an extended phase of soft revenues since 2015 that persisted through 2019.

Amerisafe’s experience as a specialty provider of workers’ compensation insurance for small to midsize employers in high-hazard industries dates back to 34 years. The line of business that the insurer follows is profitable. It rakes in higher premium owing to inherent workplace risks associated with such policies.

The company is known for its balance sheet strength, operational excellence, a neutral business profile and appropriate enterprise risk management.

The company also boasts a robust operating platform. Through extensive cost-management initiatives, Amerisafe executes one of the most crucial activities in the workers’ compensation industry. This, in turn, enabled the player to maintain its operating return on equity at 20%, above the industry’s ROE of 12%.

On a positive note, Amerisafe has limited exposure to COVID-19 in its voluntary book of business. Thus, the company doesn’t expect much claims pertaining to the pandemic though its top line may remain under pressure. 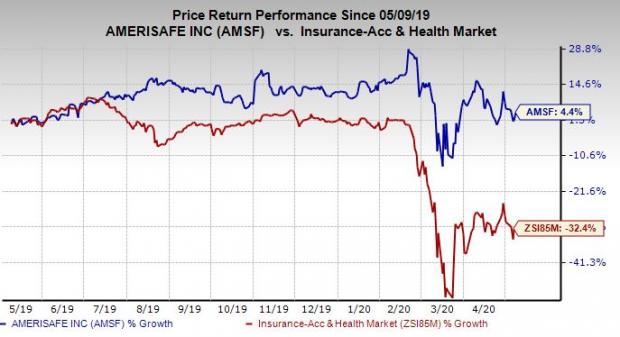 The stock has also seen the Zacks Consensus Estimate for current-year earnings being revised 4.4% upward over the past 30 days.

Amerisafe currently has a Zacks Rank #2 (Buy). Some other top-ranked stocks in the insurance space are The Allstate Corp. (ALL - Free Report) , The Progressive Corp. (PGR - Free Report) and Mercury General Corporation (MCY - Free Report) , each carrying the same Zacks Rank as Amerisafe.You can see the complete list of today’s Zacks #1 Rank (Strong Buy) stocks here.

Allstate’s bottom line beat estimates in each of the trailing four quarters by 18.45%, on average.

Progressive’s earnings beat estimates in three of the last four quarters (missed in one) by a positive surprise of 15.58%, on average.

Mercury General’s bottom line beat estimates in two of the preceding four quarters, missing in the other two, the average positive surprise being 0.47%.