Kronos Worldwide, Inc. (KRO - Free Report) logged a profit of $27 million or 23 cents per share in first-quarter 2020, down from $30.3 million or 26 cents in the year-ago quarter. Earnings, however, topped the Zacks Consensus Estimate of 15 cents.

Results in the reported quarter were impacted by lower sales volumes and increased raw materials as well as other production costs.

Net sales fell 4% year over year to $421 million, hurt by lower sales volumes. However, the figure beat the Zacks Consensus Estimate of $416 million.

The company’s titanium dioxide (TiO2) sales volumes fell 5% year over year due to lower volumes in North American, Latin American and export markets, partly offset by increased volumes in the European market. TiO2 production volumes were down 1% year over year in the reported quarter.

Average TiO2 selling prices were flat year over year in the reported quarter.

Net cash used in operating activities was $9.8 million for the reported quarter.

Kronos Worldwide said that the coronavirus pandemic had limited impact on its operations and financial performance in the first quarter of 2020. The company expects global gross domestic product to be considerably impacted for an indeterminate period. Factoring in the impact of the pandemic on the world economy, the company envisions its sales and earnings to be lower than what it had originally expected for 2020.

Shares of Kronos Worldwide have lost 26.8% in the past year compared with 24.3% decline of the industry. 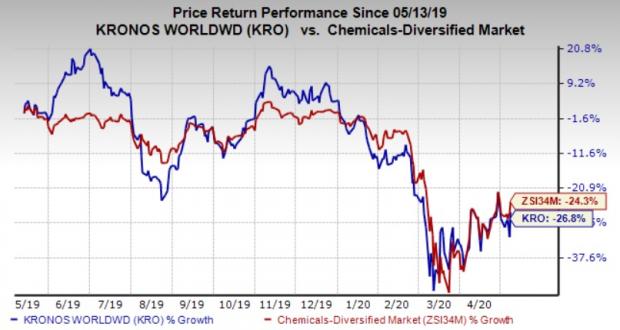