Barring one-time items, adjusted earnings per share for the reported quarter were 29 cents, which surpassed the Zacks Consensus Estimate of 23 cents.

Revenues surged around 85% year over year to $722 million in the reported quarter, matching the Zacks Consensus Estimate. The upside can be attributed to higher titanium dioxide (TiO2) sales.

TiO2 sales shot up 109% year over year to $580 million. Sales included contributions from the acquired operations of Cristal.

Zircon sales rose 2% to $65 million in the reported quarter. Sales include revenues from the Cristal operations.

Feedstock and other products’ sales climbed 57% to $77 million, boosted by Cristal operations.

The company currently expects TiO2 volumes to decline in the high teens to low 20s percent range on a sequential comparison basis in second-quarter 2020. Zircon volumes are forecast to remain largely in line with first-quarter 2020. 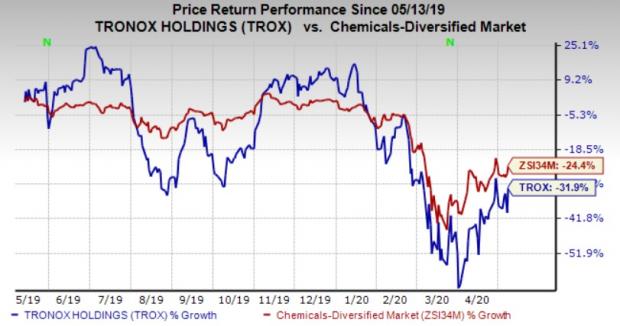