Axsome Therapeutics, Inc. (AXSM - Free Report) reported first-quarter 2020 loss per share of 88 cents, wider than the Zacks Consensus Estimate of a loss of 60 cents and also the year ago quarter’s loss of 32 cents.

Axsome currently does not have any approved product in its portfolio. As a result, the company is yet to generate any revenues from the same.

Shares of Axsome have declined 14.9% in the year so far against the industry’s increase of 5.2%. 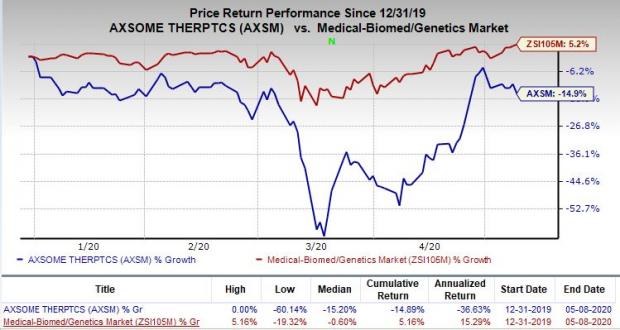 General and administrative (G&A) expenses were $5 million, up 78.5% year over year due to increased stock compensation expenses and higher personnel costs.

As of Mar 31 2020, Axsome had cash worth $$197.3 million compared with $220 million as of Dec 31, 2019. Axsome believes that its cash balance as of March-end will be enough to fund anticipated operations for at least a couple of years.

Per data announced in December 2019, AXS-05 met the primary endpoint and significantly improved symptoms of depression in the phase III GEMINI study on MDD. Axsome plans to submit a new drug application (NDA) for AXS-05 in the fourth quarter of 2020 to treat MDD.

Notably, in April 2020, the company announced positive top-line data from the phase II/III ADVANCE-1 study on AXS-05 for treating agitation associated with AD. The candidate met the primary endpoint and rapidly, substantially and significantly improved agitation in patients with Alzheimer’s disease as compared to placebo. The company will begin a phase III study on the same in the second half of 2020.

Axsome also aims to initiate a second phase III study on AXS-05 in the third quarter of 2020 for addressing patients with TRD.

Last month, AXS-07 met two regulatory co-primary endpoints in the phase III INTERCEPT study that evaluated the candidate for early treatment of migraine. The co-primary goals were freedom from migraine pain and freedom from most bothersome symptoms compared to placebo in the study.

We remind investors that last December, AXS-07 met the two regulatory co-primary endpoints in the phase III MOMENTUM study evaluating the same for acute treatment of migraine. Axsome plans to file a NDA for AXS-07 to the FDA in the fourth quarter of 2020 for the given indication.