Over the past year, ICF’s shares have depreciated 15.7%, as against 10.5% growth of the industry it belongs to. 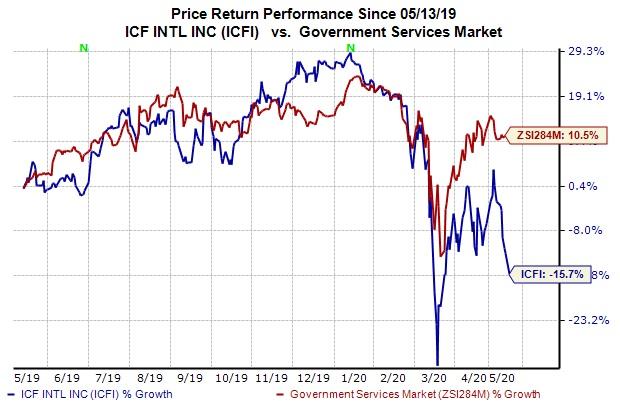 The company stated that the coronavirus pandemic did not have a significant impact on its quarterly performance. Notably, it has business-continuity plans in place and shifted more than 98% of its employees to work from home.

Total backlog and funded backlog amounted to $2.7 billion and $1.3 billion at the end of the first quarter, respectively. The total value of contracts awarded in the quarter came in at $356.9 million, up 23.4%.

The company used $15.2 million of cash from operating activities, and capex was $4.7 million. ICF paid out dividends of $2.6 million in the reported quarter.

Management lowered its revenue expectation to $1.45-$1.51 billion from the $1.6-$1.65 billion anticipated previously. The current Zacks Consensus Estimate of $1.47 billion lies below the mid-point ($1.48) of the revised guidance.

IQVIA Holdings Inc. (IQV - Free Report) delivered first-quarter 2020 adjusted earnings per share of $1.50, which outpaced the consensus mark by 1.4% but decreased 1.9% on a year-over-year basis. The reported figure was within the guided range of $1.46-$1.51. The stock currently carries a Zacks Rank of 3.

Insperity, Inc. (NSP - Free Report) came up with first-quarter 2020 adjusted earnings of $1.70 per share, which surpassed the consensus mark by 5.6% but decreased 14.1% year over year. The reported figure matched the higher-end of the guided range of $1.61-$1.70. The stock currently carries a Zacks Rank #3.