Halozyme Therapeutics, Inc. (HALO - Free Report) reported first-quarter 2020 loss of 4 cents per share, wider than the Zacks Consensus Estimate of a loss of 1 cent. The company had reported earnings of 1 cent in the year-ago quarter.

Total revenues declined 55.5% year over year to $25.4 million due to lower royalties and collaboration revenues as well as product sales. The top line also missed the Zacks Consensus Estimate of $39.35 million.

Shares of Halozyme were down 4.1% in after-market trading on May 11, following the earnings release. However, the stock has gained 40% so far this year compared with the industry’s 4.7% increase. 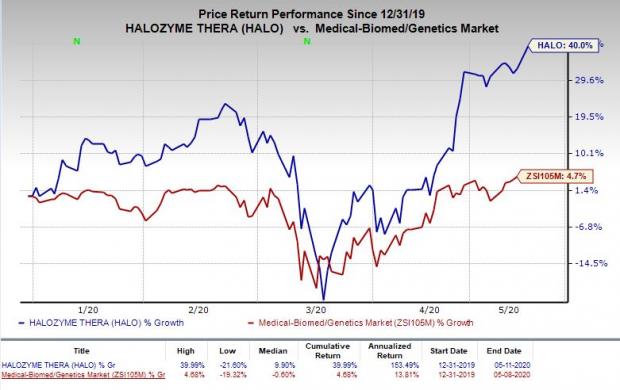 Royalty revenues were $16.8 million in the first quarter, down 6% from the year-ago quarter. The lower royalties resulted from lower sales of its partnered drugs due to biosimilar competition.

Product sales, solely from the sale of bulk rHuPH20 to collaborators using the ENHANZE platform for drug development, decreased 2.9% to $8.1 million in the first quarter.

Revenues under collaborative agreements were $0.4 million compared with $30.6 million in the prior-year quarter. The significant decline was due to recognition of $30 million upfront payment from argenx (ARGX - Free Report) in the year-ago quarter.

Research and development (R&D) expenses declined 67.6% year over year to $10.2 million mainly due to discontinuation of oncology drug development efforts.

Selling, general and administrative (SG&A) expenses were $12.6 million, down 29.8% from the year-ago period. The decline was due to lower compensation and commercial-related expenses as a result of a restructuring initiatives announced last year.

Earlier this month, the FDA approved the subcutaneous (“SC”) formulation of J&J’s (JNJ - Free Report) blood cancer drug, Darzalex, which will be available as Darzalex Faspro. The new formulation of the blockbuster drug was developed using Halozyme’s ENHANZE technology. The SC formulation of Darzalex is also under review in Europe. Last month, the Committee for Medicinal Products for Human Use recommended its approval in Europe. The company anticipates a European approval in mid-2020.

Moreover, in February, the FDA accepted Roche’s (RHHBY - Free Report) regulatory application seeking approval for subcutaneous administration of the fixed-dose combination of Perjeta and Herceptin utilizing ENHANZE technology. A decision is expected in October. Roche has also submitted regulatory application in Europe for the same.

Meanwhile, the company stated on its earnings call that nine clinical studies that were planned for this year by its collaboration partners using the company’s ENHANZE technology may face a delay of one to two quarters compared to previously anticipated timeline due to COVID-19. However, the majority of the studies will still start in 2020, including the delay. Among the nine planned studies for 2020, a phase II study has already been started by its partner, argenx recently.

Despite the COVID-19 pandemic, Halozyme maintained its view for revenues and earnings in 2020 provided in January. The company expects total revenues in 2020 to be between $230 million and $245 million, indicating year-over-year growth of 17-25%. It expects reported earnings to be in the range of 60-75 cents per share.