Revenues were $96 million for the reported quarter, down 4% year over year. It marginally missed the Zacks Consensus Estimate of $96.1 million.

American Vanguard saw flat sales in its domestic business while its international business witnessed lower sales due to weaker market conditions and impacts of currency exchange translation. Sales by crop and product line were mixed across the company’s businesses in the reported quarter.

Sales by Regions and Categories

Revenues from American Vanguard’s domestic crop business for the reported quarter was flat year over year at roughly $50.4 million.

Sales from the domestic non-crop business went down 2% to around $11 million.

Revenues from international businesses fell 9% to around $34.6 million.

American Vanguard said that the coronavirus pandemic did not materially impact its performance in the first quarter. The company is not yet able to determine the long-term effects of the outbreak. American Vanguard noted that it is focusing on maximizing its results during the remainder of 2020 and is poised to perform in line with its peers.

American Vanguard’s shares are down 5.7% over a year, compared with the 29% growth of the industry it belongs to. 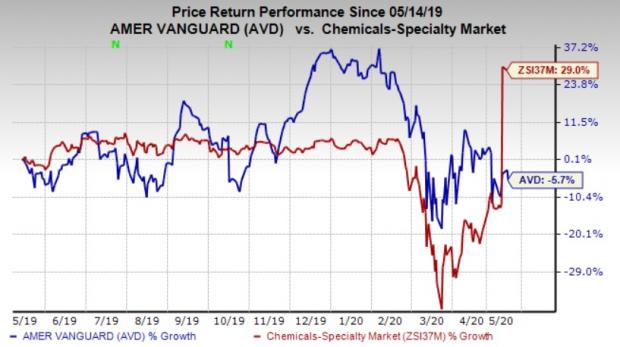 Equinox Gold has a projected earnings growth rate of 231% for the current year. The company’s shares have rallied roughly 44% in a year. It currently carries a Zacks Rank #1 (Strong Buy). You can see the complete list of today’s Zacks #1 Rank stocks here.

Scotts Miracle-Gro has an expected earnings growth rate of 17.7% for the current fiscal year. The company’s shares have gained roughly 58% in the past year. It currently carries a Zacks Rank #2 (Buy).

Newmont has a projected earnings growth rate of 85.6% for the current year. The company’s shares have surged around 103% in a year. It currently has a Zacks Rank #2.