The bottom line in the reported quarter was hit by an impairment charge of $38 million related to certain intangible assets and a $22.7 million settlement charge associated with the termination of a U.S. defined benefit pension plan.

Barring one-time items, earnings came in at $1.38 per share for the reported quarter, down from $1.41 a year ago. It, however, surpassed the Zacks Consensus Estimate of $1.07.

Net sales surged 79% year over year to roughly $378.6 million in the quarter. It also topped the Zacks Consensus Estimate of $370.1 million. Revenues were boosted by additional sales associated with the company's combination with Houghton International, Inc and the acquisition of the operating divisions of Norman Hay plc.

The company’s gross profit in the reported quarter climbed around 77% year over year on the back of sales related to Houghton and Norman Hay. Gross margin for the quarter was 35.4%, down from 35.9% a year ago. Gross margin was impacted by price and product mix largely due to reduced gross margins in the legacy Houghton business.

Adjusted EBITDA was $60.5 million for the reported quarter, more than doubling from $29.6 million in the prior-year quarter.

The company ended the quarter with cash and cash equivalents of around $316.4 million, up more than four fold year over year. Long-term debt was $1,076.3 million, up from $11.7 million a year ago.

Net operating cash flow for the reported quarter was $20.2 million, up around 1% from $20 million in the prior-year quarter.

The company anticipates the second quarter to be the most challenging quarter of 2020 as many customers have significantly reduced or shutdown their production. It expects to see an improvement as it progresses through the second half of the year.

The company’s shares are down 23% over a year, compared with the 27.1% growth recorded by its industry. 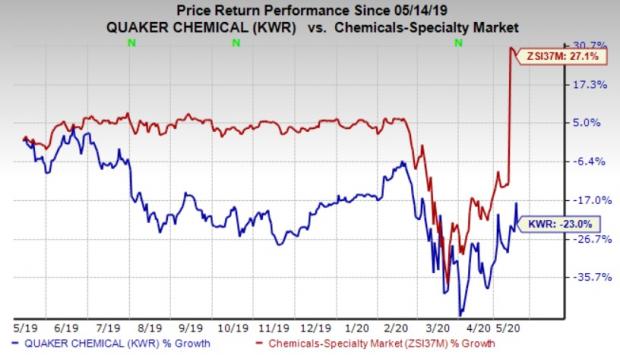 Equinox Gold has a projected earnings growth rate of 231% for the current year. The company’s shares have rallied roughly 44% in a year. It currently carries a Zacks Rank #2 (Buy). You can see the complete list of today’s Zacks #1 Rank (Strong Buy) stocks here.

Scotts Miracle-Gro has an expected earnings growth rate of 17.7% for the current fiscal year. The company’s shares have gained roughly 55% in the past year. It currently carries a Zacks Rank #2.

Newmont has a projected earnings growth rate of 85.6% for the current year. The company’s shares have surged around 107% in a year. It currently has a Zacks Rank #2.