The Progressive Corporation (PGR - Free Report) reported earnings per share of $1.62 for April 2020, soaring 96% year over year on an improved top line.

Year to date, Progressive’s shares have gained 3.5% against the industry’s 24.8% decline. The rise was courtesy of the company’s sustained strength in results. 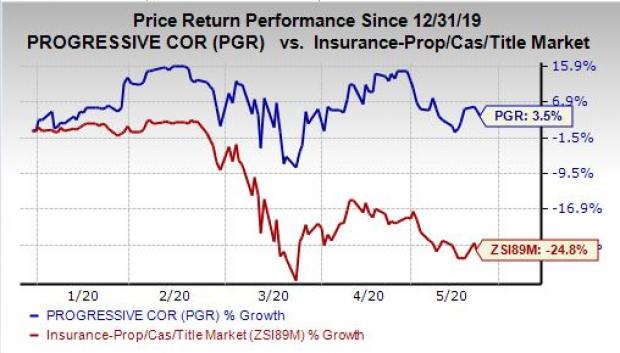 Net realized gain on securities in the quarter was $537.3 million, up from a gain of $131.6 million in the prior-year quarter.

Combined ratio — percentage of premiums paid out as claims and expenses — improved 400 basis points (bps) year over year to 83.4%.

Total operating revenues came in at $4.5 billion, improving 29.3% year over year owing to an 8.5% increase in premiums, 2.2% higher investment income and other revenues plus a 13.7% rise in service revenues. However, 12.8% lower fees was a partial relief.

In April, policies in force were impressive in both Vehicle and Property business. In its vehicle business, Personal Auto segment improved 10% year over year to nearly 15.5 million. Special Lines increased 4% from the year-earlier month to 4.6 million policies.

Progressive’s Commercial Auto segment rose 6% year over year to 0.8 million. The Property business had 2.3 million policies in force in the reported month, up 13% year over year.

Zacks Rank and Other Top Insurers

National General, a specialty personal lines insurance holding company, provides various insurance products and services in the United States, Bermuda, Luxembourg and Sweden. Its earnings beat estimates in two of the last four quarters and missed in the other two, the average positive surprise being 5.68%. The stock sports a Zacks Rank #1 (Strong Buy). You can see the complete list of today’s Zacks #1 Rank stocks here.

Allstate provides property and casualty, and other insurance products in the United States and Canada. The company surpassed estimates in each of the last four quarters, the average positive surprise being 18.45%.The stock carries a Zacks Rank #2.

Here's Why Range Resources (RRC) is Worth Betting on Now