Valued at $22.4 million, the contract was awarded by the Naval Air Systems Command, Patuxent River, MD. Lockheed is expected to complete the task by November 2023.

A Brief Note on Hawkeye Aircraft

Manufactured by Northrop Grumman (NOC - Free Report) , Hawkeye is an airborne, all-weather, tactical, early-warning aircraft used by the U.S. Navy. E-2D is the fourth version of the E-2 Hawkeye. The technology and gadgets fitted in this aircraft increase its visibility on targets far away. Notably, the E-2D Advanced Hawkeye has a structurally distinctive design — a rotating rotodome and four vertical stabilizer tail configurations — that provides 360-degree surveillance all the time.

In recent times, the importance of military aircraft in the U.S. aerospace-defense market has gained significant traction. This can be attributed to advancements and integration of new tactical and logistical features, along with the inclusion of improved radar systems and the availability of advanced system engineering services.

While Lockheed is itself a prominent aircraft manufacturer, it also possesses combat-proven expertise in radar surveillance systems. Thus, the aforementioned growing demand for military jets and their upgrades are boosting Lockheed’s growth.

As the E-2D Hawkeye Aircraft is a significant defense program for the U.S. government, we can expect more contract inflows like the latest one in the near future. These, in turn, should further bolster Lockheed’s top line in the coming days.

Furthermore, the U.S. government’s fiscal 2020 defense budget includes a spending plan of $57.7 billion on aircraft, indicating a massive increase of 166% from the approved fiscal 2019 defense spending on aircraft. Such spending provision should usher in more contracts for Lockheed and boost profits, moving ahead.

In a year’s time, shares of Lockheed have gained 3.1% against the industry’s 26.5% decline. 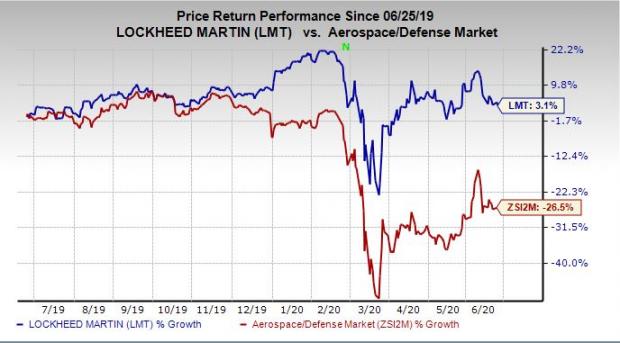