These two corporate PPAs will expand Canadian Solar's Brazilian portfolio, which has more than 1.9 gigawatt-peak (GWp) of contracted PPAs since the company entered this market.

Canadian Solar's high-efficiency bifacial BiHiKu modules will be installed in both the solar power projects, situated in Brazil. Once operational, the combined projects are expected to generate 610 GWh of clean energy annually.

Brazil is currently one of the fastest-growing solar markets in the world, attracting the interest of a number of foreign investors, multilateral development banks, energy companies and equipment manufacturers. This in turn has been boosting employment in the nation, thereby making installation of solar energy even more desirable.

Per a recent report by ABSolar, the Brazilian Association for Solar Energy, solar has already brought more than $26.8 billion (in Brazilian real) in new private investments to the country and generated around 130 thousand jobs since 2012. Moreover, Brazil has crossed the 5-GW mark for installed solar power through large plants, and small and medium systems installed on roofs, façades and land.

Naturally, Brazil’s solar market offers a great profitable playground for solar project developer and module manufacturers like Canadian Solar to enhance their market share. The latest signed PPAs are a testament to that.
In October 2019, the company secured the right to construct three solar photovoltaic (PV) projects from two Brazilian Private Corporate Auctions. These projects, with a total output capacity of 393.7 MWp, are expected to start commercial operations before the end of 2022. Prior to that in July, the company won 51.1 MWP solar PV projects in a Brazilian auction. These project developments, including the latest PPAs, reflect the predominance that Canadian Solar enjoys in the solar market of Brazil.

While Brazil remains a lucrative market for solar players’ expansion, the global solar market as a whole has been rallying over the past decade. Per a report by Fortune Business Insights, the global solar power market size is projected to reach 4766.8 MW in 2026 from 2019, exhibiting a CAGR of 30.7%.

To reap benefits from this expanding global solar market, Canadian Solar and other solar players are making every possible effort, which is expected to boost profits.

At the end of first-quarter 2020, Canadian Solar’s utility-scale solar power plants in operation totaled 956 MWp, with an estimated resale value of $830 million. The company ended the first quarter with total project pipeline of 12 GWp. This reflects solid prospects for this stock through monetization of global solar project assets.

During 2019, ReneSola (SOL - Free Report) connected about 60 MW of projects. Going ahead, it aims incremental project pipeline in core markets to reach 1 GW by the end of 2020.

In a year’s time, shares of Canadian Solar have lost 13.4% against the industry’s increase of 27.3%. 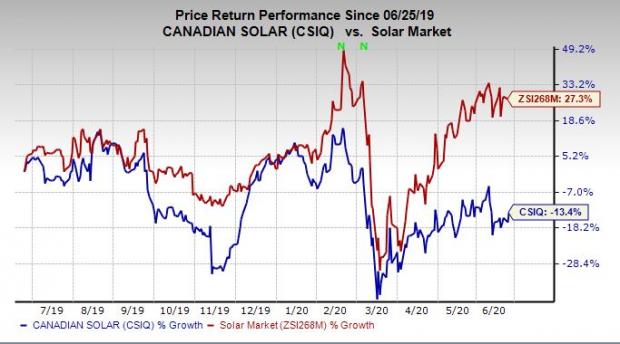