Bear of the Day: Under Armour (UAA)

Under Armour (UAA - Free Report) stock has been on a broader downward trend since 2015. UAA shares then fell off a cliff after the athletic apparel firm reported its fourth quarter results in February. And then the coronavirus hit.

Under Armour rose to prominence on the back of its tight-fitting workout and athletic apparel designed to be worn under uniforms and other gear in both the heat and the cold. The company slowly expanded into a more traditional athletic apparel firm in an effort to try to compete against industry giants such as Nike (NKE - Free Report) and Adidas (ADDYY - Free Report) .

But a lot has changed since Under Armour reached its high of nearly $50 a share 2015. The main problem became that consumers focused on clothing and footwear that could be worn to the gym and as casual attire. The athleisure market, which has seen the likes of Target (TGT - Free Report) and others try to emulate Lululemon’s (LULU - Free Report) success, has largely passed Under Armour by.

The company’s revenue in its key North American market has slipped in recent years, which isn’t good since it accounts for roughly 70% of sales. Under Armour has now tried to zig while others zag, in attempting to focus on the performance market that made it famous. But neither that shift or its restructuring efforts have proved enticing enough for many on Wall Street—even though it did mount a comeback.

In an effort to shake things up at his struggling company, founder Kevin Plank announced that he would step down as CEO back in October of 2019. Patrik Frisk officially took over in January, but then the coronavirus disrupted the broader retail space.

UAA’s first quarter sales slipped 23%, with wholesale revenue down 28% and direct-to-consumer revenue off 14% from the year-ago period. 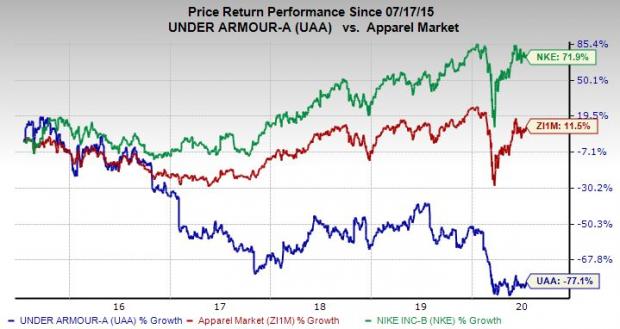 The nearby chart shows just how bad things have been for Under Armour over the last five years, with the stock down nearly 80%. This decline came as Nike jumped 70% and Lululemon skyrocketed 400%.

Looking ahead, Under Armour’s second quarter revenue is projected to plummet 54% to $549.30 million, based on our current Zacks estimates. This is expected to push its full-year 2020 sales down by nearly 24%. And the bottom end of the income statement appears even worse.

Under Armour’s earnings estimates have turned far worse over the last 90 days. This negativity helps UAA earn a Zacks Rank #5 (Strong Sell) at the moment, alongside its “F” grades for both Value and Growth in our Style Scores system. And Under Armour is part of a space that rests in the bottom 9% of our more than 250 Zacks industries.

Bear Of The Day: Weibo (WB)