We get into the heart of the Q1 earnings season this week, with almost 800 companies reporting results, including 191 S&P 500 members. By the end of this week, we will have crossed the halfway mark in the Q1 reporting cycle, at least for the S&P 500 index, and will have a far clearer view of the overall earnings picture. But with results from almost of a quarter of the index’s total market capitalization already on the books, we have good enough sense of how this earnings season is unfolding.

What we are finding is that not only is an above-average proportion of companies beating estimates, particularly revenue estimates, but growth is steadily accelerating from what we saw in the preceding quarter and on pace to reach its highest level in almost three years. Importantly, estimates for the current period (2017 Q2) appear to holding up nicely as well. Continuation of these trends through the rest of this earnings season should serve as a reassuring development for the market.

As of Friday, April 21st, we have Q1 results from 95 S&P 500 members that combined account for 24.9% of the index’s total market capitalization. Total earnings for these companies are up +14.3% from the same period last year on +4.6% higher revenues, with 72.6% beating EPS estimates and 62.1% beating revenue estimates. The proportion of companies beating both EPS and revenue estimates is 51.6%.

The table provides the current earnings season scorecard, as of April 21st, 2017. 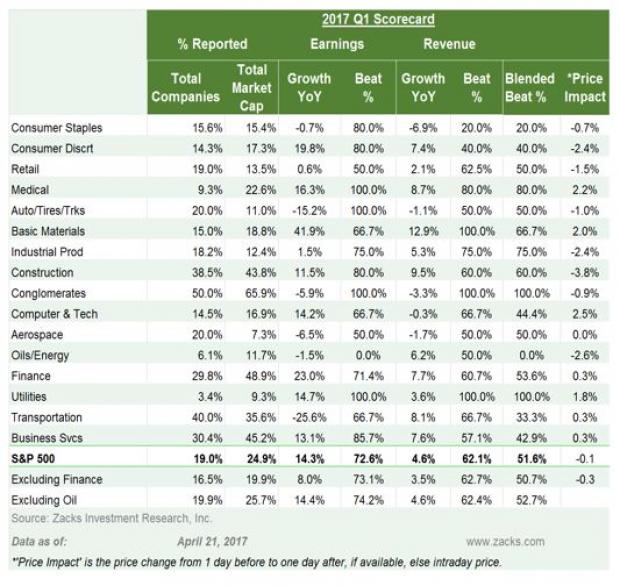 The chart below provide a comparison of the results thus far with what we have seen from this same group of 95 S&P 500 members in other recent periods. 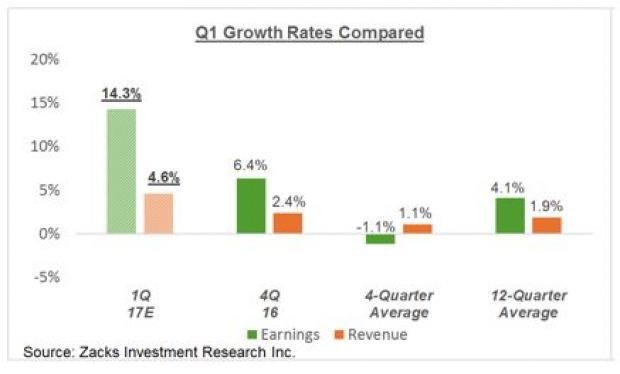 As you can see, the Q1 growth pace is notably tracking above what we had seen from the same group of 95 index members in other recent periods. A big part of the strong growth at this stage is thanks to the Finance sector, but the growth comparison still remains favorable even on an ex-Finance basis. We will discuss the Finance sector’s performance a little later, but the comparison chart below (right-hand side chart) shows how the ex-Finance Q1 growth at this stage tracks above other recent periods.

The chart below compares the proportion of positive EPS and revenue surprises in Q1 thus far with what we had seen from the same group of 95 index members in other recent periods. 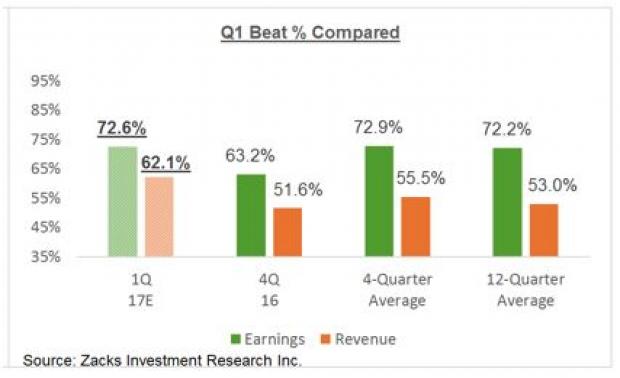 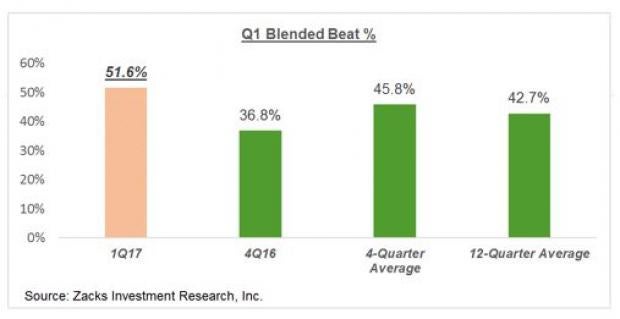 For the Finance sector, we now have Q1 results from 28 of the sector’s 94 companies that combined account for 48.9% of the sector’s total market capitalization in the index. Total earnings for these 28 Finance sector companies are up +23.0% from the same period last year on +7.7% higher revenues, with all 71.4% beating EPS estimates and 60.7% beating top-line estimates.

This is better earnings growth than we have seen from the same group of 28 banks in other recent periods, which is having a favorable impact on the aggregate Q1 growth expectation for the sector as a whole. The chart below compares the growth pace (earnings and revenue) and proportion of positive surprises for these 28 banks with what we saw from this same group of companies in other recent periods.

Total Q1 earnings for the Finance sector as a whole, combining the reported actuals with the still-to-come estimates, are expected to be up +14.8% from the same period last year. The table below shows the sector’s Q1 earnings growth expectations at the medium-industry level contrasted with estimates for the following four quarters and actual results for the preceding four periods.

Please note that the Major Banks industry, of which JPMorgan, Wells Fargo and others are part, accounts for roughly 45% of the sector’s total earnings (insurance is the second biggest earnings contributor, accounting for about 25% of the total).

Key Earnings Reports for the Week of April 24th

We are into the heart of the earnings season this week, with 191 S&P 500 members reporting results. The major reports this week include:

Coca Cola (KO) – Coke comes out with quarterly results before the market’s open on Tuesday April 25th, a very busy day on the reporting cycle with 44 S&P 500 members reporting quarterly results today (of which 27 are in the morning). The company is expected to earn $0.44 per share on $8.97 billion in revenues, representing year-over-year changes of -2.7% and -12.7%, respectively. The stock has lagged the Zacks Consumer Staples sector as well as the S&P 500 index in the year-to-date as well as trailing 12-month periods on lingering questions about the company’s bottler refranchising strategy and outlook for the business. The stock is up +3.7% since the start of the year, but is down -3.4% over the past 12 months. Guidance and management outlook will determine how the stock reacts to this earnings report; Coke beat EPS and revenue estimates in the preceding quarter, but the stock was down in response on soft guidance.

Caterpillar (CAT) – Caterpillar is another major company reporting before the market’s open on Tuesday April 25th, with the mining and construction equipment maker expected to earn $0.62 per share on $9.36 billion in revenues, representing year-over-year declines of -7.8% and -1.1%, respectively. Estimates have been trending up in recent days, with the current $0.62 per share estimate up from $0.53 per share a month back. Driving estimates higher is the expectation of an improving demand outlook for construction equipment on dissipating oil and gas industry headwinds and hopes of Trump infrastructure spending. The stock hasn’t done much despite this improving earnings picture; it has lagged the Zacks Industrial Products sector and the S&P 500 index this year – the stock is up +1.5% in the year-to-date period vs. +4.1% for the sector and +5.2% for the S&P 500 index. This stock market performance puts the spotlight on this earnings report, with management’s outlook for the end-markets as the key catalyst.

DuPont (DD), 3M (MMM), Eli Lilly (LLY) and AT&T (T) are some of the other major companies reporting results on Tuesday April 25th.

Proctor & Gamble (PG) – Proctor & Gamble is one of the major companies reporting results before the market’s open on Wednesday April 26th when a total of 50 index members will be coming out with quarterly reports (of which 27 will come out in the morning). The company is expected report $0.94 per share on $15.68 billion in revenues, representing year-over-year changes of +8.8% and -0.5%, respectively. The revisions trend has been positive, though the Zacks EPS estimate for the quarter hasn’t moved up by much in recent days. The stock has modestly done better than the S&P 500 index in the year-to-date period (+6% vs. +5.2%), though it has lagged the Zacks Consumer Staples sector (+7%). Management’s guidance about organic growth and trends in the men’s razors/blades market where it faces tough competition from Harry’s and Dollar Shave Club.

Boeing (BA) – Boeing reports Q1 results before the market’s open on Wednesday April 26th, with the company expected to earn $1.91 per share on $21.44 billion in revenues, representing year-over-year changes of +10% and -5.3%, respectively. Analysts have lowered their estimates for the quarter, with the current $1.91 EPS estimate down from $2.03 a month back, with the negative revisions reflecting delayed commercial aircraft shipments, leaving full-year estimates unchanged. The stock has done really well lately; it is up +16% this year, outperforming the Zacks Aerospace/Defense sector (up +7.5%) and the S&P 500 (up +5.2%). The stock was up big following the last earnings release when management offered positive cash flow guidance, which will most likely get reiterated in this earnings report.

Amazon (AMZN) – Amazon isn’t the only major company reporting results on Thursday April 27th; it is one of 67 S&P 500 members reporting this day (of which 41 are in the morning). We actually have a who’s who of top-tier operators coming out with results after the market’s close at the same time with Amazon, including Google’s parent Alphabet (GOOGL), Microsoft (MSFT), Intel (INTC) and Starbucks (SBUX - Free Report) . Under Armour (UA), Southwest (LUV) and Ford (F) are some of the major operators reporting results before the market’s open.

Amazon is expected to earn $1.05 per share on $35.4 billion in revenues, representing year-over-year changes of -2.3% and +21.5%, respectively. Amazon always gives the impression of not caring about short-term profitability metrics, though it came out with strong EPS beats in the last two earnings reports and the stock was up big following each of those releases. The company’s cloud business, the Amazon Web Services, has emerged as a big growth driver lately and performance in that business will be key to the stock’s performance following this earnings report as well. Given the stock’s recent performance (up +20% year-to-date vs. +9.2% gain for the Zacks Retail sector and +5.2% for the S&P 500 index), expectations appear on the high side, leaving the stock vulnerable to a disappointment.

Exxon (XOM) and Chevron (CVX) are the notable reports on Friday April 28th. 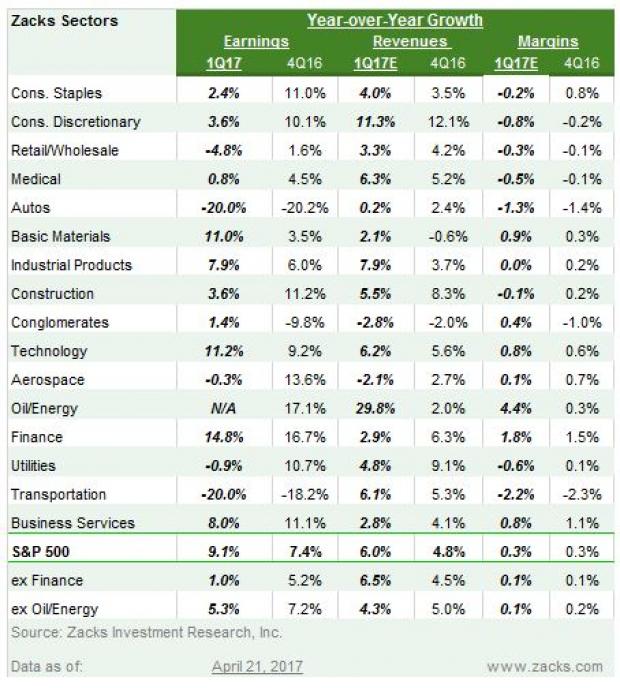 Please note that the Q1 earnings season follows the strong showing on the earnings front in the preceding reporting cycle. Not only did 2016 Q4 growth reach the highest in two years, but total earnings for the quarter also reached a new quarterly record. The strong Q4 performance came after the first positive earnings growth in 2016 Q3, having declined in each of the preceding 5 quarters.

The chart below shows the Q1 earnings growth contrasted with what is expected in the following three quarters and actual results in the preceding 5 quarters. As you can see in the chart below, the growth pace is expected to ramp up in 2017. 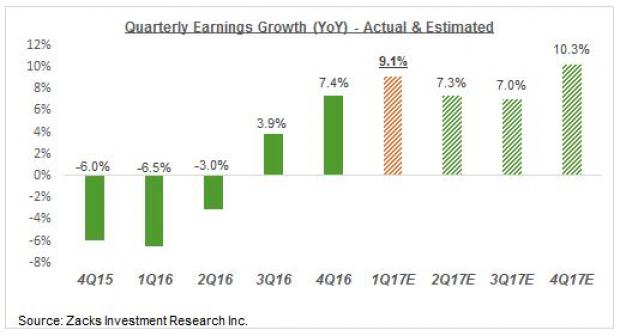 Please note that the earnings backdrop has not changed in any meaningful way since the November elections, notwithstanding the market’s strong gains since then.

Before looking into the stocks mentioned above, you may want to get a head start on potential tech IPOs that are popping up on Zacks' radar. Imagine being in the first wave of investors to jump on a company with almost unlimited growth potential? This Special Report gives you the current scoop on 5 that may go public at any time.

One has driven from 0 to a $68 billion valuation in 8 years. Four others are a little less obvious but already show jaw-dropping growth. Download this IPO Watch List today for free >>