RCI Hospitality Holdings (RICK - Free Report) is a Zacks Rank #5 (Strong Sell) that owns and operates adult nightclubs that offer live adult entertainment. While some of the business has been forced to close due to the pandemic, the stock doesn’t seem to care as its sits at all-time highs.

Its time for investors to take some profits before earnings come later this month.

The company was founded in Houston, Texas and was formerly known as Rick’s Cabaret. In 2014, the company changed its name to RCI hospitality and since then has operated popular adult clubs like Rick’s Cabaret, Club Onyx, Kappa Men’s Club and Studio 80 among others.

In August, the company reported a surprise miss on EPS of 7.25%. The company also reported revenues of $14.7M v the $47M from the prior year. Despite the miss, RCI remained optimistic as 31 locations were open.

The miss on earnings was the second this year and the third miss out over the last two years. 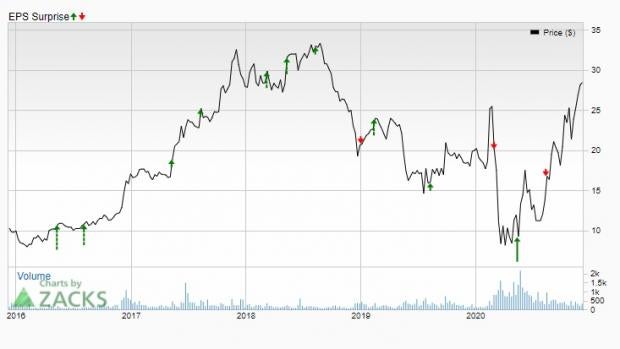 Over the last couple months, the company reported Q4 revenues doubled year over year from their Bombshell clubs. Sales were up 82% from Q3 with 8 of the 10 locations open. They announced expansion plans with the segment and investors are pricing in growth from the possibility of 10 new Bombshell clubs.

However, all of RCI's locations continue to limit capacity and some have had more restrictions in areas with more severe lockdown rules. The question for investors is will demand remain for these gentleman clubs when everything else opens up.

Over the last 7 days, estimates for the current year have dropped 55%, from $0.71 to 0.32.  For the current year, estimates have fallen 14% over the same time frame. So while estimates look better once we get past the pandemic, they still are falling despite the optimism surrounding Bombshells.

The stock is trading above levels seen before the pandemic, which is amazing considering the business. Since bottoming in March under $7 a share, the stock has marched higher to make a 2020 high at $30.44.

RICK has held its 21-day moving average for over a month and if broken could give way to the 50-day MA at $25.

The bulls have been “making it rain” for seven months now, but they might want to pull back on their optimism considering increasing lockdowns across the country.

Bear of the Day: Express (EXPR)