Note: The following is an excerpt from this week’s Earnings Trends report. You can access the full report that contains detailed historical actuals and estimates for the current and following periods, please click here>>>

•    These results represent a notable improvement over what we have been seeing from the same group of 477 index members in the recent past. Not only is the growth pace (both earnings as well as revenues) tracking above other recent periods, but the proportion of companies beating estimates, particularly revenue estimates, is notably tracking above other recent periods.

•    With the positive Wal-Mart (WMT) report now in, we have Q1 results from 85.7% of the retailers in the S&P 500 index. Total Q1 earnings for the Retail sector are up +1.7% from the same period last year on +3.2% higher revenues, with 61.1% beating EPS estimates and 50% beating revenue estimates. The sector’s Q1 results are tracking below what we have been seeing in other recent periods and are also among the weakest this reporting cycle.

•    For Q1 as a whole, combining the actual results from the 477 S&P 500 members that have reported with estimates from the still-to-come 23 companies, total earnings are expected to be up +13.1% on +6.9% higher revenues, the highest growth pace in over five years. The Finance, Technology, Industrial Products, Consumer Discretionary, Basic Materials, and Business Services sectors stand out with double-digit earnings growth.

•    Estimates for the current period (2017 Q2) have come down since the start of the quarter, but the magnitude of negative revisions nevertheless compares favorably to other recent periods.

With even the Retail sector results now mostly out, the Q1 earnings season is now effectively behind us. Our overall take on this earnings season has been favorable, with growth reaching its highest level in more than 5 years, an above-average proportion of companies beating EPS and revenue estimates, and relatively encouraging trends in estimate revisions for the current period. This reassuring view doesn’t extend to the Retail sector, whose results have been fairly weak.

For the sector as a whole, we now have Q1 results from 94.8% of retailers in the S&P 500 index. Total earnings for these retailers are up +1.7% from the same period last year on +3.2% higher revenues, with 61.1% beating EPS estimates and 50% beating revenue estimates.

This is a weaker performance than we have seen from the sector in other recent reporting cycles, particularly with respect to positive surprises. The charts below compare the sector’s Q1 results with what these same retailers reported in other historical periods.

With respect to the sector’s growth pace in Q1, we should keep in mind that the unfavorable comparison at this stage is despite the strong growth from Amazon, whose earnings were up +41.1% on +22.6% higher revenues. The reported Retail sector earnings growth is flat on an ex-Amazon basis.

Total Q1 earnings for the 477 index members that have reported results are up +13.6% from the same period last year on +7.2% higher revenues, with 72.3% beating EPS estimates and 65.4% coming ahead of top-line expectations. The proportion of companies beating both EPS and revenue estimates is currently 51.6%.

The side-by-side charts below compare the growth rates and beat ratios for the 477 index members with what we saw from the same companies in other recent periods.

The comparison charts above show that growth as well as positive beats are tracking above historical periods. The proportion of companies beating revenue estimates is particularly notable, as is the revenue growth pace. 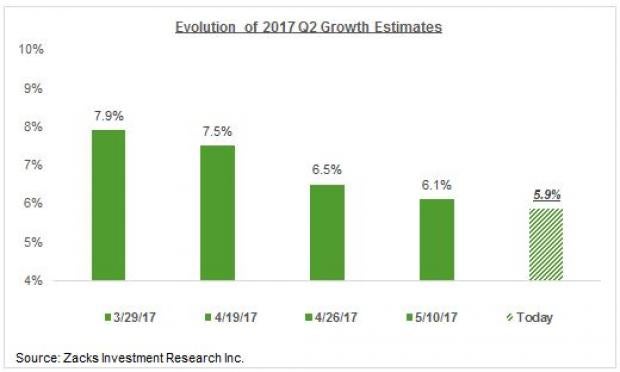 All in all, there is plenty to like in how the Q1 earnings season has unfolded.

Zacks has just released a Special Report that spotlights this fast-emerging phenomenon and 6 tickers for taking advantage of it. If you don't buy now, you may kick yourself in 2020. Click here for the 6 trades >>>