The large money-center banks that will kick-off the Q4 2020 earnings season for the sector this week have suffered a significant hit to profitability as a result of the pandemic. The Q3 earnings season three months back showed business conditions starting to stabilize, with revenue weakness resulting from soft demand conditions partly offset by decelerating loan-loss provisions and effective cost controls.

Business conditions likely weakened in Q4 in response to the surging infection rates, a development that has been showing up in high-frequency economic data as well. Friday’s negative labor market reading is just the latest on that front.

While business conditions remained difficult in 2020 Q4 and are likely remain so in the first quarter of 2021 as well, the market has learned to look past this painful period to when the ongoing vaccination exercise will reach a critical mass and put the country on the recovery path. Importantly, the market has started discounting a far more expansive fiscal policy regime from the incoming administration following the Georgia runoffs.

Bank stocks have been big beneficiaries of upgraded market sentiment, with these stocks reversing their earlier underperformance to emerge as market leaders. You can see this in the chart below that plots the one-year performance of JPMorgan (JPM - Free Report) and Citigroup (C - Free Report) , which will report Q4 results before the market’s open on January 15th, relative to the S&P 500 index.

As you can see here, the two banks have lagged the S&P 500 in a notable way over the past year. But a more recent reading of this relationship presents a different look, as you can see in the chart below that tracks this performance over the last three months.

As noted, this performance momentum reflects the market’s macro expectations for the coming quarters and not any optimism about banks’ Q4 results. As such, we wouldn’t expect this favorable trend to reverse course in response to quarterly results, unless management teams paint an extended downbeat outlook.

The market is looking for a notable improvement in bank business conditions in 2021, particularly in the second half of the year. This has started showing in earnings estimates already, with JPMorgan’s current 2021 EPS estimate of $9.43 up from $8.51 three months back. The same for Citi has increased from $5.62 three months back to $6.19 today. Even Wells Fargo (WFC - Free Report) , which has been dealing with a number of company-specific issues and will be reporting results the same day as JPMorgan and Citi, is enjoying positive estimate revisions.

As such, the overall set up for bank earnings remains positive, with the market likely looking past Q4 results. For the Zacks Major Banks industry, which includes these major banks and account for roughly 45% of the Finance sector’s earnings, Q4 earnings are expected to decline -23.5% on -4.1% lower revenues. This would follow -17.8% earnings decline on -4.3% lower revenues.

The current state of consensus earnings expectations is captured in the following 3 charts. 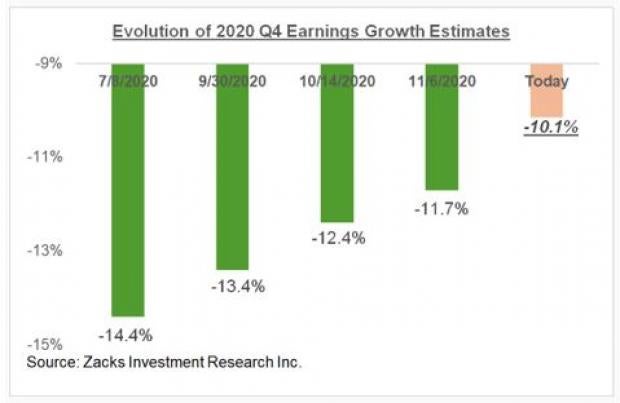 The second chart takes a big-picture view of S&P 500 quarterly expectations, with earnings and revenue growth expectations for the next three quarters contrasted with actuals for the preceding four periods; expectations for 2020 Q4 have been highlighted. 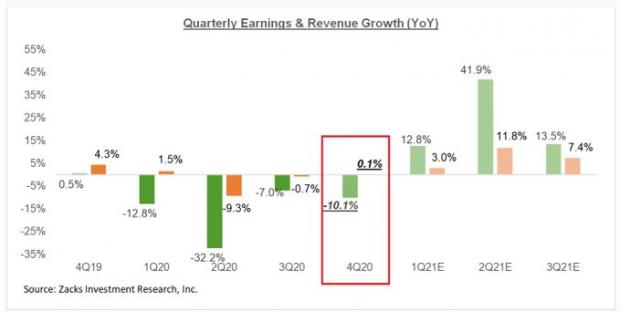 The third chart provides a big-picture view on an annual basis. 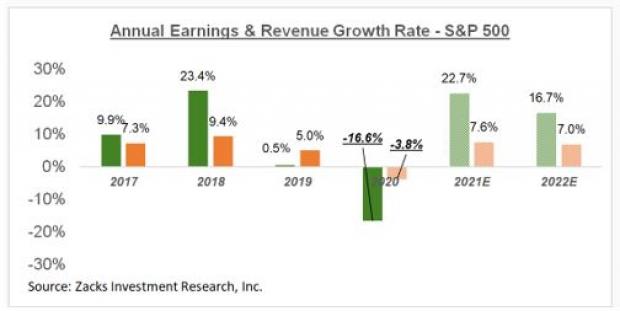 As you can see above, growth is expected to resume this year, with full-year 2021 earnings for the S&P 500 index currently expected to be up +22.7% relative to 2020 estimates. Estimates for 2021 have been steadily going up over the last six months. But we strongly feel that there is significant room for further positive revisions as the overall macro backdrop stabilizes and gets clearer, particularly in the second half of the year.

The Q4 reporting cycle will (unofficially) get underway this week. But from our perspective, the Q4 earnings season has gotten underway already, with results from 18 S&P 500 out at this stage. These 18 index members - including FedEx (FDX - Free Report) , Nike (NKE - Free Report) , Oracle (ORCL - Free Report) , Adobe (ADBE - Free Report) and others - reported results for their fiscal quarters ending in November, which we count as part of the official December-quarter tally.

We have roughly 30 companies on deck to report results this week, including 8 S&P 500 members. This week’s reporters include the aforementioned big banks and a few other major players like Delta Airlines (DAL - Free Report) .

For the 18 index members that have reported already, total Q4 earnings or aggregate net income is up +19% from the same period last year on +9.4% higher revenues, with 100% of the companies beating EPS estimates and 83.3% beating revenue estimates.

This is too small a sample to draw any firm conclusions from. That said, the comparison charts below put these results in a historical context.

The summary table below shows Q4 expectations in the context of what we saw in the preceding period. 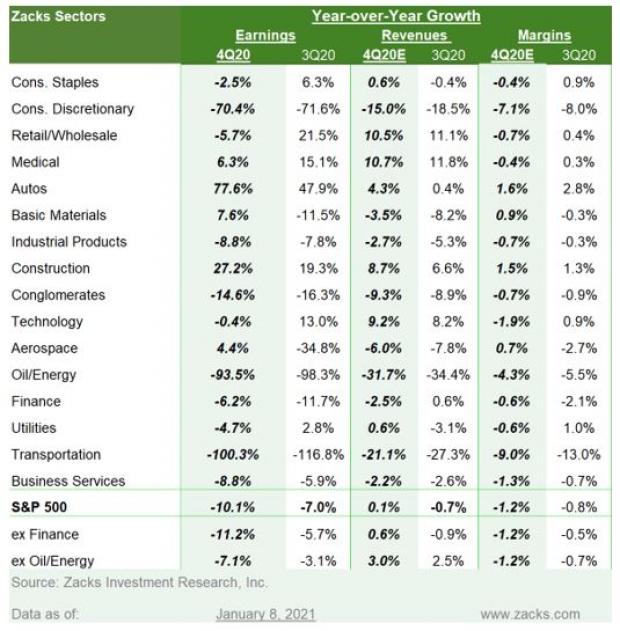 For an in-depth look at the overall earnings picture and expectations for the coming quarters, please check out our weekly Earnings Trends report >>>> An Improving Earnings Outlook to Start 2021 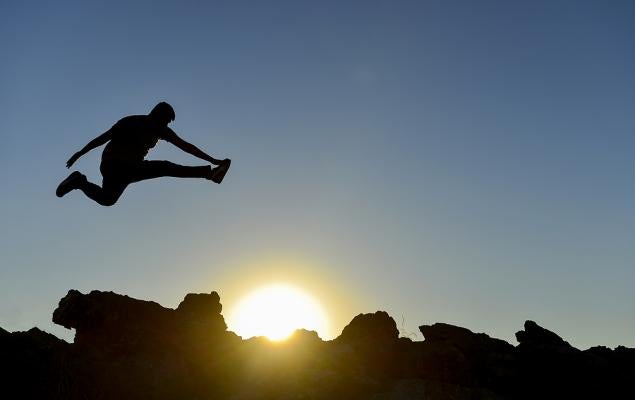