Apple & Microsoft Will Set The Pace For Big Tech Earnings

The two most valuable publicly-traded companies in the world will be releasing their final earnings this week to sum up 2020's dystopian year. The global pandemic has pushed the world economy to digitalize what would have taken years in a matter of months. Businesses and consumers have been forced to function remotely, which has set in motion a wave of digital advancement in every market sector, driving shares of innovative tech enterprise to the moon.

Apple (AAPL - Free Report) and Microsoft (MSFT - Free Report) stock both had stellar years in 2020, with 79% and 38% returns in the past 52-weeks. These robust rallies are going to be put to the test this week, with AAPL reporting on Wednesday (1/27) after the bell and MSFT releasing its December quarter results Tuesday (1/26) after market close. 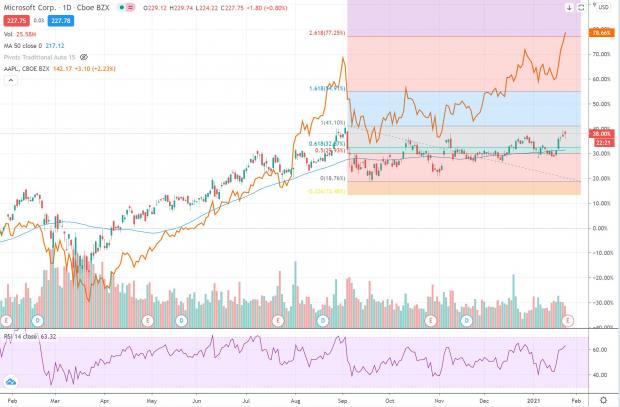 68 companies out of the S&P 500 have reported their Q4 results, and despite 87% beating earnings estimates by an average of 21%, the next day price action has been a 2% decline. Investors are pulling profits on the news, no matter how big the earnings beat.

The markets have already priced in so much optimism that big earnings beats are expected. Investors will be looking for the unexpected in this week's earnings calls: forward guidance and new product releases that would justify valuation multiples higher than the frothy levels we are already trading at.

The tech sector is driving up into this week's potentially market-moving earnings, with the innovation-driven Nasdaq 100 surging over 5% in the past 5 days of trading. AAPL and MSFT are up 12% and 7.5%, respectively, over the past week. These two stocks make up over 21% of the Nasdaq 100 and more than 12% of the S&P 500.

I am worried the run-up into this week's earnings will cause a 'buy the rumor and sell the news' scenario.

Tech investors & traders are starting to get cold feet to begin the week. The Nasdaq 100 ripped up over 1.5% on open this morning (1/25), hit an overbought level (RSI 70+) and sold off over 2.5% in a matter of 1.5 hours, then stabilized back to positive territory in the afternoon.

I would be careful with my tech purchases in the next couple of weeks. I believe a large portion (if not all) of 2021's optimism is already baked in. I don't think it would take much to tip the scales of this manic market from buying euphoria to selling panic.

Below is what to expect from big tech earnings over the next week and a half, according to Zacks Consensus estimates.

AAPL has become the 10-year US Treasury note for risk-on assets (aka the stock market). This tech giant has $91 billion in cash & equivalents on its balance sheet and produces consistent & reliable cash-flows, which reached $59.7 billion (after dividends) in AAPL's fiscal 2020 (ending in September). The company provides an unfailing dividend, which currently sits at 0.6%.

AAPL shares are held by most investors whether they know it or not, with these shares being the most held stock across all ETFs, mutual funds, and retirement funds. Being the largest publicly traded company in the world, this probably isn't surprising.

My concern with this stock doesn't lie in its ability to produce robust profits in the years to come, but rather whether its growth outlay justifies its current valuation.

Apple doesn't derive the bulk of its revenue from subscriptions, the new holy grail of sustainable growth in the tech sector, or through digitally motivated services. The company makes the lion's share of its sales through good old fashion product sales, and Apple is known for pioneering the innovative curve for the sleekest tech products. Still, the enterprise's biggest revenue driver, the renowned iPhone, has been experiencing declines in recent years as the smartphone industry matures.

Now the focus for Apple is on its subscription-based services like iCloud, Apple Music, Apple TV+, and Apple Arcade. These services have seen relatively slow growth and make up less than 20% of the enterprise's fiscal 2020 sales, which ended September 30th.

The company still has some tricks up its sleeve. The Apple car is expected to hit the electric vehicle markets in 2024 and the business has a massive cash pile for strategic acquisitions or another market disrupting product.

AAPL has been propelled primarily by a valuation push in 2020, and I am not sure if its 33.6x price to forward-earnings is justified for the mature business. AAPL is currently sitting at all-time highs going into this week's December quarter earnings reports.

According to Zacks Consensus estimates, analysts are expecting AAPL to produce an EPS of $1.39 on sales of $102.61 billion, which would illustrate year-over-year growth of just over 11% for both metrics. These would represent a record quarter for the company, and with 18 consecutive quarters of beats, I anticipate these expectations to be met, and so does everyone else. An earnings beat is more than baked in to the stock already. Investors and analysts will be looking for forward guidance as a price action catalyst.

In the release, look for how Apple's first 5G iPhone performed in its first quarter of sales and how management sees the product performing in the remainder of 2021. Focus on any newly announced innovative projects as well as how its subscription services have fared. These will be the company's primary growth drivers.

Contrary to how I feel about AAPL going into earnings, I think MSFT is a well-positioned long term buy. Bill Gates' brainchild was the largest publicly traded company at the turn of the century over two decades ago and has maintained its innovative-edge. It is the second-largest, most valuable publicly traded enterprise in the market today.

This software giant has been a role model for tech start-ups around the world. Microsoft has controlled the computer OS market for decades and is now taking control of the cloud computing market. The effective transition from on-premise software to cloud-based systems has brought this legacy firm back to its place at the top.

Whether it's Microsoft Office or one of its many cloud offerings, Microsoft's new subscription-based revenue drivers have allowed this enterprise to grow out its sales by reliable double-digit percentages YoY. Microsoft offers customers Infrastructure-as-a-Service (IaaS) through its platform, Azure, competing in this very lucrative but quickly saturating business with tech giants like Amazon (AMZN - Free Report) and Google (GOOGL - Free Report) .

Microsoft has the cash and scalability to take control of the cloud market if it is able to execute on consumer needs effectively. With a management team that continues to impress and stay ahead of the innovative curve, I see Microsoft's cloud dominance sustaining.

Microsoft Azure won a $10 billion Joint Enterprise Defense Infrastructure (JEDI) contract in October of 2019. A crucial 10-year government contract with the pentagon that locks in some substantial revenue. This contract not only gave Azure bragging rights, but it reinforced the attractiveness of Azure for potential customers.

The company has produced reliable double-digit topline expansion for the past 13 quarters, as its successful cloud transition takes shape. According to Grand View Research, the cloud market is expected to grow by 15% on a compounded annual basis through 2027. Microsoft will be a significant beneficiary of this cloud wave.

MSFT is not a bad looking stock going into earnings. I believe these shares don't get the same love as AAPL because MSFT doesn't have the sleek products and flashy gimmicks that AAPL pushes. Microsoft is an amazing software company that has a very compelling growth story. Its 31.8x price to forward earnings multiple is reasonable (with consideration of the ultra-low interest rate environment) for a business that provides profitable growth with exceptional sales visibility and delivers its investors a dependable 1% annual dividend.

The enterprise has $138 billion in cash & equivalents on its balance sheet. It generates consistent & reliable cash-flows with an average quarterly free-cash inflow (after dividends) of $10.2 billion in 2020. Microsoft has enormous financial flexibility for innovative projects further acquisitions. The company has been an acquisition machine in the past 12-months with 8 strategic acquisitions in 2020. Microsoft took advantage of the market chaos and will continue to easily navigate choppy markets waters with its top notch management team, headed by Satya Nadella.

MSFT has 16 quarters of top and bottom-line beats, so I expect the stock's price action to be driven by its earnings call, management sentiment, and forward-looking guidance.

According to Zacks Consensus estimates, analysts are anticipating an EPS of $1.64 on sales of $40.12 billion, which would represent just over 8.5% year-over-year growth for both metrics.

There is no question that the markets are building up some froth as speculation and FOMO trading run rampant. Bubbles are forming across all market sectors, but that doesn't mean that they will pop anytime soon. As the famous economist, John Maynard Keynes said, "The markets can remain irrational longer than you can remain solvent." I will continue to ride the waves until the narrative changes.

Earnings from Microsoft and Apple this week could catalyze some market movement one way or the other, so stay cognizant. 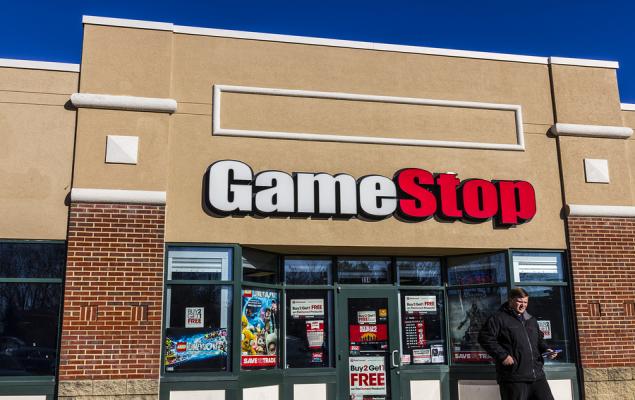