The blowout Apple (AAPL) report became the latest earnings release that built on the momentum we have been seeing from a diverse cross-section of companies this earnings season. The trend is particularly notable in the Technology sector, where not only the likes of Facebook (FB) and Google (GOOGL) are shining, but even stodgier operators like Microsoft (MSFT - Free Report) and Intel (INTC) appear to have recaptured their mojo.

The law of large numbers doesn’t appear to have the same meaning for these Tech companies as it does for leaders in other sectors. After all, Apple’s +18.9% higher earnings in Q3 on +12.2% higher revenues are on a base of more than $9 billion in earnings and $46.9 billion in revenues in the year-earlier quarter. Importantly, Apple showed again that while iPhone may account for a bigger chunk of its business, it is by no means that only driver, as the +24% jump in the high-margin services revenue to $7.9 billion shows.

All in all, it has been an impressive earnings performance from the Technology sector, which should help ease concerns about the sector’s strong performance lately (the Zacks Tech sector is up +25.9% year-to-date vs. +15.3% gain for the S&P 500 and +6.2% gain for the Russell 2000).

For the Tech sector, we now have Q3 results from 85% of the sector’s market cap in the S&P 500 index. Total earnings for these Tech companies are up +22.4% from the same period last year on +9.3% higher revenues, with 81.8% beating EPS estimates and 86.4% beating revenue estimates.

As high as the proportion of Tech companies beating estimates is, the beats percentages are actually in-line with other recent quarters. But growth is notably accelerating, as the comparison charts below show.

We now have Q3 results from 406 S&P 500 members that combined account for 85.4% of the index’s total market capitalization. Total earnings for these companies are up +7.5% from the same period last year on +6.3% higher revenues, with 73.9% beating EPS estimates and 66.7% beating revenue estimates.

The charts below compare the Q3 results thus far from the 406 index members with what we had seen from the same group of companies in other recent periods.

Looking at Q3 as a whole, combining the actual results from the 406 S&P 500 members that have come out with estimates for the still-to-come 94 index members, total earnings are expected to be up +6.5% from the same period last year on +5.6% higher revenues. Excluding the weak results from the Finance sector, total earnings for the rest of the index would be up +9.6% on +6.1% revenue growth. The table below shows the summary picture for Q3, contrasted with what was actually achieved in the preceding earnings season. 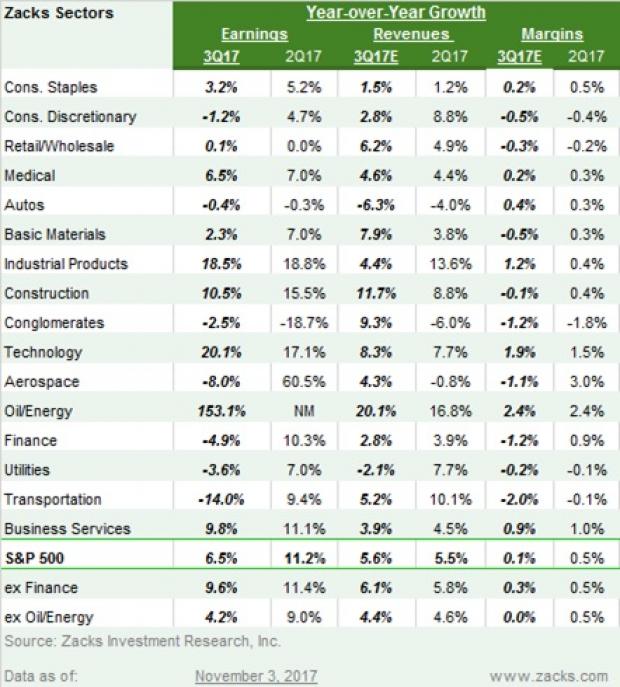 First, there is clear momentum on the revenue front, with growth notably accelerating from other recent periods. Total revenues for the 406 S&P 500 members that have reported results, as of Friday, November 3rd, are up +7.5% from the same period last year, which compares to +6.3% top-line growth for the same group of companies in the preceding quarter and still lower average growth rates in the prior periods, as the comparison chart below shows. 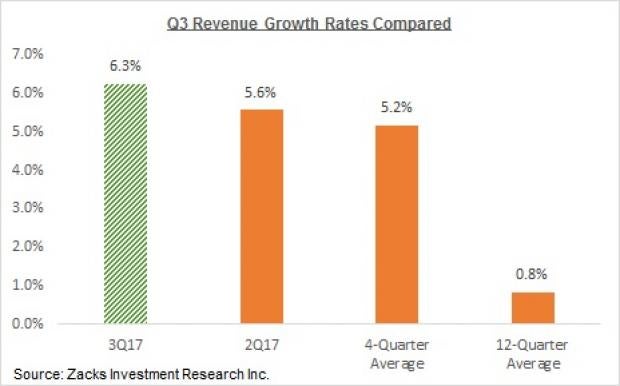 Second, the above-average proportion of positive surprises that we saw in the preceding period has continued this earnings season as well. We typically don’t give positive surprises a lot of weight in evaluating or assessing an earnings season since we all know that management teams are experts in managing expectations. Even then, the trend emerging in the Q3 earnings season is noteworthy for two reasons. First, estimates for the quarter had not fallen by as much as had historically been the case. Second, the proportion of positive revenue surprises, a much harder variable to manipulate relative to earnings, is only a shade below the preceding quarter’s record level.

The chart below shows the proportion of 406 S&P 500 members that have beaten both EPS and revenue estimates and how that compares to historical periods. 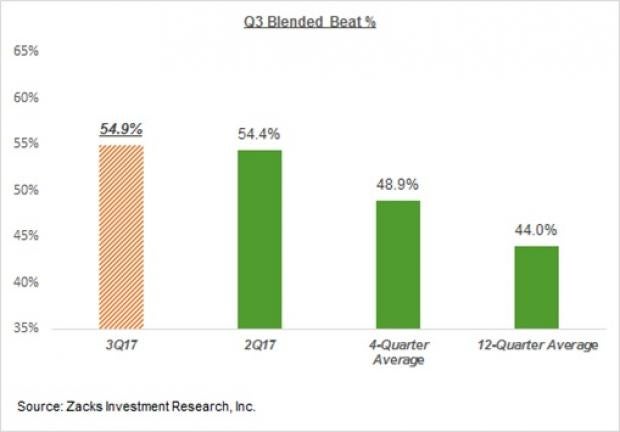 Third, the revisions trend for the December quarter is shaping up to be unusually favorable. The pattern over the last few years has been that as the quarterly earnings reporting season gets underway, estimates for the following quarter would start coming down. This trend improved a bit over the last few quarters when estimates would not fall by as much as was historically the case, but they were nevertheless coming down.

The unusual thing about the Q4 estimates is that they actually went up at first and have started coming down only over the last couple of days, which has brought Q4 growth expectations to where they stood at the start of the period. This is totally different from what we would typically see in the comparable periods of other earnings seasons over the last few years. This will most likely change as more companies report Q3 results and manage the market’s expectations for the December quarter, but it is nevertheless an unusually positive development. 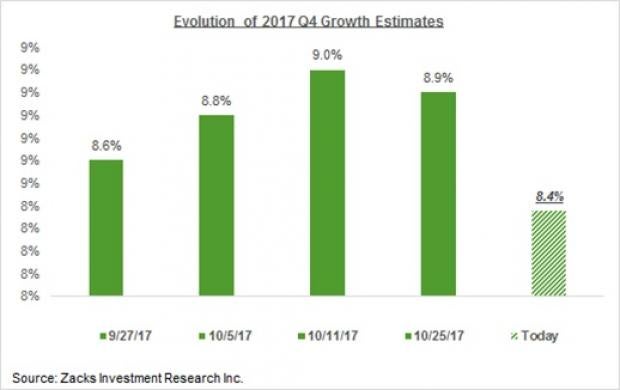 Fourth, total Q3 earnings for the S&P 500 index are on track to reach a new all-time quarterly record, surpassing the previous record reached in the preceding earnings season, as the chart below shows. 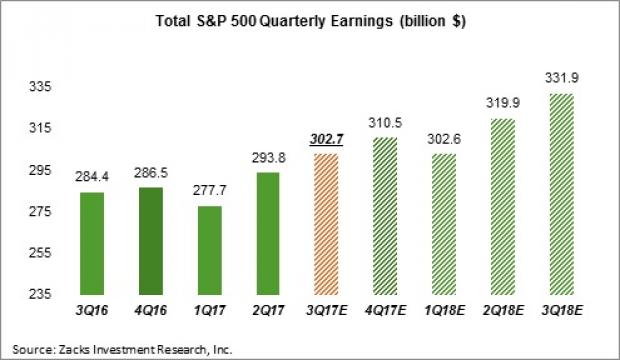 Please note that the $302.7 billion is the blended earnings total that combines the actual earnings that have come out with estimates for the still-to-come companies.

The chart below shows Q3 earnings growth expectations contrasted with what is expected in the following three quarters and actual results in the preceding 5 quarters. As you can see in the chart below, the growth pace is expected to decelerate from the double-digit level of the first two quarters of the year, but is expected to accelerate to ramp back up from the current period onwards. 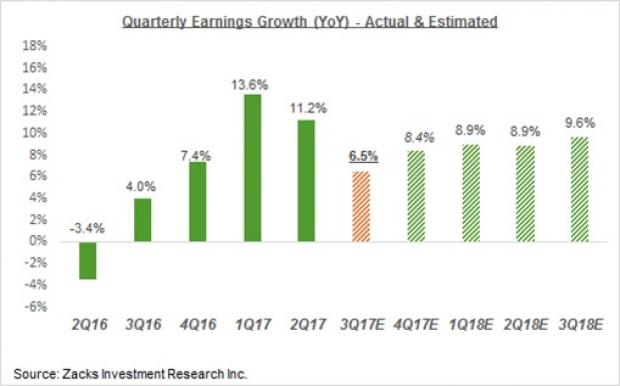