Record installations of new wind capacity in the fourth quarter have kept wind energy’s role intact as a primary growth catalyst for the U.S. renewable space. With solid project pipeline in view over the near term, we expect to witness further growth for wind-focused stocks.

Also, increasing scope of the fuel cell market is expected to boost the prospects of U.S. renewable stocks. However, tariffs imposed on the import of aluminum and steel and its extension in January 2020 cloud the optimistic outlook for the U.S. renewable stocks to some extent. The forerunners in the U.S. alternative energy industry are Equinor ASA (EQNR - Free Report) , Covanta Holdings and Evergy Inc. (EVRG - Free Report) .

Per a report by Bloomberg Green, in 2020, the United States installed 29 gigawatts (GW) of renewable energy, reflecting almost 80% growth from the prior-year figure.

Wind Energy – A Key Growth Catalyst: Among alternative energy sources, wind energy continues to make noticeable progress in the United States. As stated by the American Clean Power Association (ACPA), wind is currently the largest source of renewable electricity generation in the United States, providing more than 7.4% of the country’s electricity. Per ACPA’s latest report, the U.S. wind industry installed nearly 10,593 megawatts (MW) of new wind power capacity in the fourth quarter of 2020, making it the highest quarter on record and reflecting an annual growth of 94%. Factors like government policies such as extended federal Investment Tax Credit (ITC) for offshore wind energy along with extension of production tax credit have boosted overall wind capacity additions lately. Also, a steadily decreasing input price along with increasing flow of investments from all over the world has been instilling growth in the wind industry. In terms of growth prospects, wind projects totaling 34,757 MW were under construction or in advanced development at the end of December 2020.  Surely this reflects the solid opportunity that the U.S. wind market currently boasts, which in turn should boost the overall expansion of the alternative energy industry.

However, the United States lags Asia and European nations in terms of infrastructure and research investments in the green hydrogen space. Government and industry investment in hydrogen as an energy carrier adds up to $2 billion per year in Asia and the European Union, as stated by a report sponsored by major oil companies, automakers, hydrogen producers and fuel cell manufacturers, which Greentech Media released in October 2020. However, the U.S. Department of Energy funding for hydrogen and fuel cells has ranged from approximately $100 million to $280 million per year over the last decade. So there remains room for growth in the green hydrogen space for America, which if it explores to its full extent will bring in a new boom in the nation’s renewable market.

Import Tariffs Pose Risk: Donald Trump dealt a blow to the U.S. alternative energy industry by imposing an import tariff of 25% on steel and 10% on aluminum in March 2018. In January 2020, another round of tariffs was imposed on steel and aluminum derivatives like imported nails, staples, electrical wires and a few more. Steel and aluminum are widely used as raw materials to construct critical wind turbines, storage and hydroelectric components. After 2018’s tariff imposition, GTM Research, MAKE Consulting and Wood Mackenzie collectively calculated that such imposition can push uplevelized cost of energy for U.S. renewable power plants by 3–5%, thereby leading to slightly lowered forecast for project deployments or slightly lowered project returns. No doubt the extension of such tariffs may have weighed heavily on the industry’s growth trajectory. With the current U.S. administration not taking any step like curbing or totally eradicating the tariff so far, the aforementioned impacts shall continue to cloud the alternative energy industry’s prospects

The Zacks Alternative Energy industry is housed within the broader Zacks Oils-Energy sector. It carries a Zacks Industry Rank #196, which places it in the bottom 23% of more than 250 Zacks industries.

On the basis of trailing 12-month EV/EBITDA ratio, which is commonly used for valuing alternative energy stocks, the industry is currently trading at 5.15 compared with the S&P 500’s 18.20 and the sector’s 6.15.

3 Alternative Energy Stocks Worth Keeping a Watch on

Equinor: Based in Stavanger, Norway, is one of the premier integrated energy companies in the world, with operations spread across 30 countries. To combat climate change, the company is investing actively in renewable energy projects, comprising power generation from solar and wind energy. Equinor expects to boost production capacities from renewables to 4 to 6 GW by 2026. The company also aims to reduce the carbon intensity of its energy products by 50%, across its worldwide operations by 2050

The Zacks Consensus Estimate for Equinor’s 2021 earnings has moved up 16.9% in the past 60 days while that for 2022 has risen 7.5%. The company delivered an average earnings surprise of 17.47% in the last four quarters.  The company currently holds a Zacks Rank #2 (Buy). You can see the complete list of today’s Zacks #1 Rank (Strong Buy) stocks here. 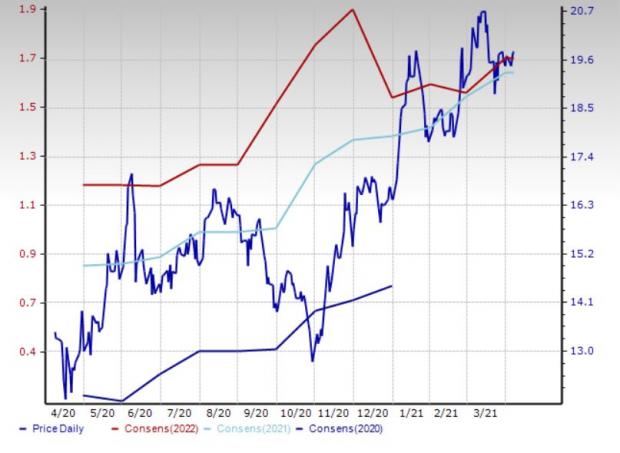 Covanta Holdings: Based in Morristown, NJ, Covanta offers waste and energy solution to its customers by processing the waste and generating energy out of it, which is named as Energy-from-Waste. Its modern Waste-to-Energy facilities safely convert approximately 21 million tons of waste from municipalities and businesses into clean, renewable electricity to power one million homes and recycle 500,000 tons of metal. Covanta’s first three projects in the United Kingdom are under construction and the company is expected to generate cash flow from 2022.

The Zacks Consensus Estimate for Covanta’s 2021 earnings has improved notably from loss of 3 cents in the past 60 days while that for 2022 has improved a solid 400% over the same time frame. The company delivered an average earnings surprise of 267.90% in the last four quarters.  The company currently holds a Zacks Rank #2. 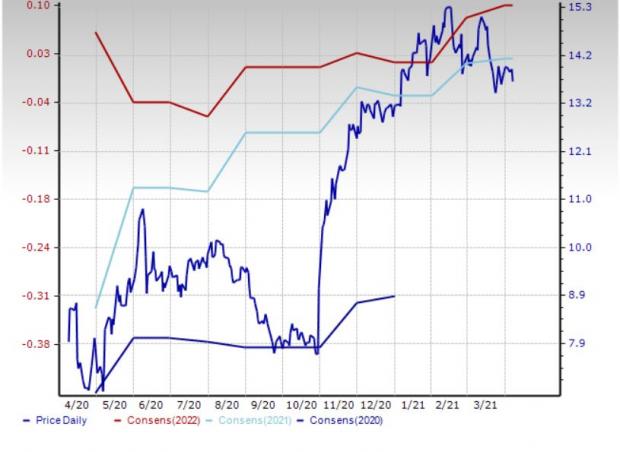 Evergy: Based in Kansas, MI, Evergy provides clean, safe and reliable energy to 1.6 million customers in Kansas and Missouri. It is home to the largest electric vehicle charging network in the United States and has one of the top 10 wind portfolios of electric utilities in the country. The company projects peak summer demand for 2021 to be 10,300 MWs, supported by the existing generation assets and power purchases..

The Zacks Consensus Estimate for Evergy’s 2021 earnings has improved 2.2% in the past 60 days and indicates year-over-year improvement of 6.5%. The company delivered an average earnings surprise of 11.12% in the last four quarters.  The company currently carries a Zacks Rank #3 (Hold). 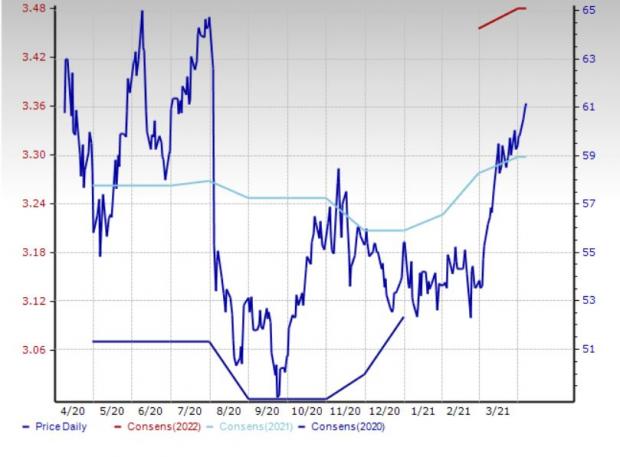