What Will Retail Earnings Show?

Wal-Mart (WMT) kicks off the Q4 earnings season for the brick-and-mortar retail space, with the retail giant on track to release results Tuesday morning. The company has been in a league of its own lately, with many in the market viewing Wal-Mart as the most capable of all the traditional retailers to offer a competitive challenge to Amazon’s (AMZN) ever-growing dominance of the retail space.

This ‘promise’ has been showing up in recent quarterly results, with the stock making significant gains following the quarterly release on November 16th when it showed impressive comps and handily beat expectations. The stock is up +52.1% over the past year, handily outperforming the +16.2% gain for Target (TGT) and the industry’s +39.9% gain. Year-to-date, Wal-Mart shares are up +6.1%, compared to the S&P 500 index’s +2.2% gain.

Wal-Mart shares lost ground in the recent market sell-off, but have already recouped almost half of its losses. This shows a high level of confidence in the company’s Q4 report on Tuesday. The other major retailers and department stores will be reporting in the following week, though Home Depot (HD - Free Report) will also be reporting results on Tuesday.

Unlike Wal-Mart, Home Depot shares have been hit hard in the recent sell off and still remain under pressure. Home Depot shares are up +30.6% over the past year, but they are down -1.5% in the year-to-date period, likely reflecting fears of higher interest rates weighing on the broader housing sector.

Please note that we have a stand-alone Retail sector, unlike the official Standard & Poor’s placement of this space in their Consumer Discretionary sector. The Zacks Retail sector includes, besides the traditional department stores and other brick-and-mortar retailers, the online vendors like Amazon and Priceline and restaurant operators. Results from the online vendors and most of the restaurant operators are already behind us at this stage and form part of the scorecard described here. Wal-Mart and Home Depot will be the first in the traditional brick-and-mortar space coming out with results.

The side-by-side charts below compare the sector’s results thus far with what we have seen from the same group of 18 retailers in other recent periods.

This is better performance than we have seen from this same group Retail sector stocks in other recent periods. But as mentioned earlier, all of these results are from the online vendors and restaurant operators, the traditional operators have yet to come out with Q4 results. We will see if these comparisons will still remain favorable after we see their results.

The chart below that we have been sharing here since the Q4 earnings season got underway shows a trend that we haven’t seen in years; definitely not since 2011. 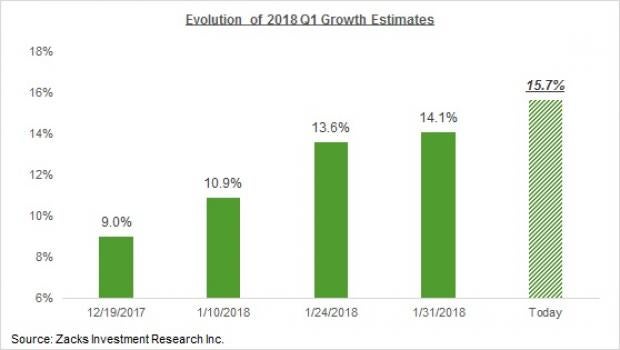 What this chart shows is that earnings growth expectations for 2018 Q1 have moved up significantly since mid-December 2017. And it’s not just 2018 Q1 estimates that are going, estimates for the following quarters and full-year 2018 are also going up.

The chart below shows how estimates for full-year 2018 have evolved over the last few months. 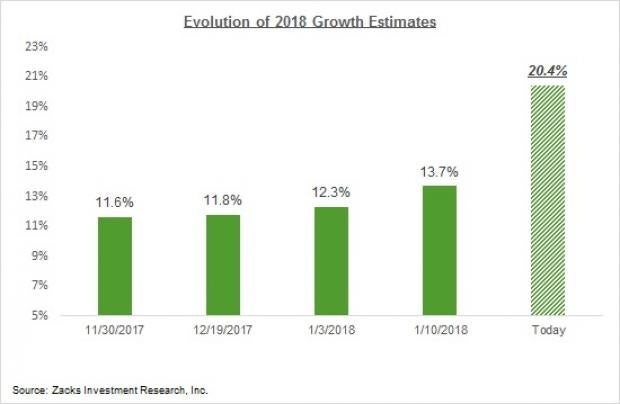 Impressively, the revisions trend is broad-based and not concentrated in one or a few sectors. Of the 16 Zacks sectors, Q1 estimates have gone up for 13 sectors. The only sectors where estimates have come down include the Conglomerates, Autos and Consumer Staples.

Total earnings for the 398 S&P 500 members that have reported results already are up +14.5% from the same period last year on +9% higher revenues, with 77.9% beating EPS estimates and 75.6% beating revenue estimates. The proportion of companies beating both EPS and revenue estimates is 62.1%.

To put these results in a historical context, the charts below compare the results thus far with what we had seen from the same group of 398 index members in other recent periods.

Any way you look at these results, the Q4 earnings season is on track to be very good. Not only is growth tracking above what we had seen from the same group of 398 index members, but a record proportion are beating EPS and revenue estimates.

Looking at Q4 as a whole, combining the actual results from the 398 index members with estimates from the still-to-come 102 companies, total earnings are expected to be up +14% from the same period last year on +8.2% higher revenues. This would follow +6.7% earnings growth in 2017 Q3 on +5.8% growth in revenues. This will be the highest quarterly growth rate in years. 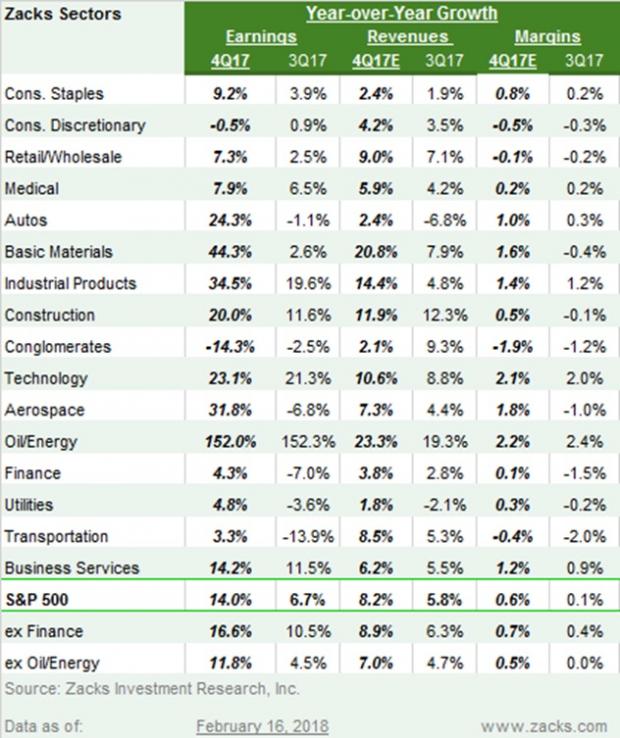 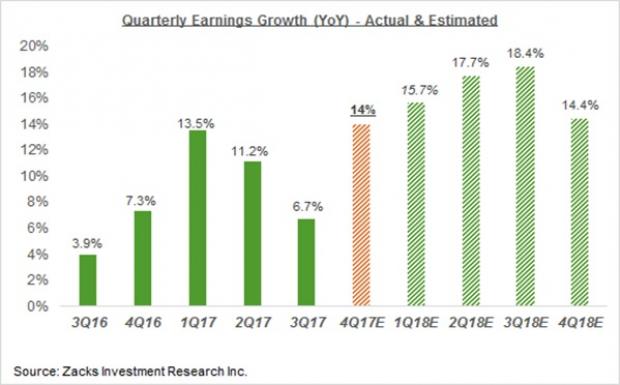 The charts below compare the results thus far with what we had seen from the same group of 294 index members in other recent periods. 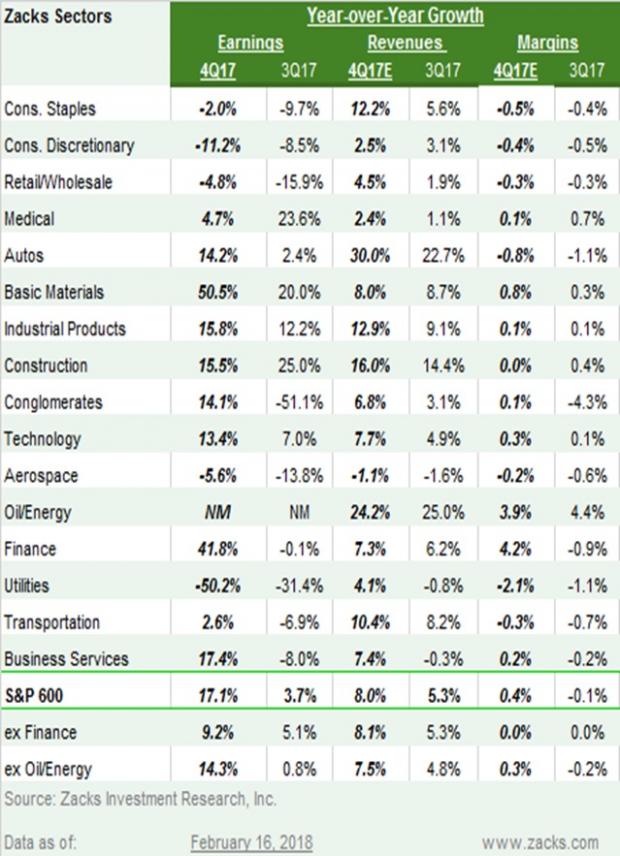 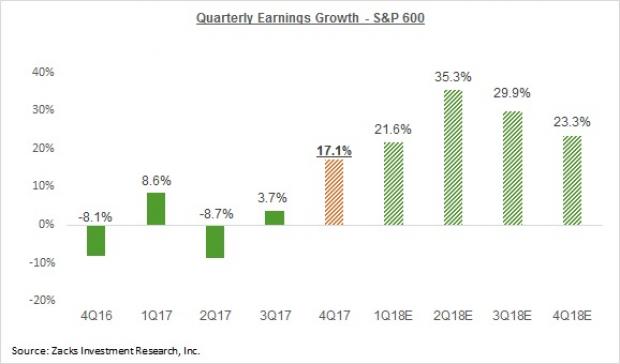 In addition to the stocks discussed above, would you like to know about our 10 finest buy-and-hold tickers for the entirety of 2018?

Last year's 2017 Zacks Top 10 Stocks portfolio produced double-digit winners, including FMC Corp. and VMware which racked up stellar gains of +67.9% and +61%. Now a brand-new portfolio has been handpicked from over 4,000 companies covered by the Zacks Rank. Don’t miss your chance to get in on these long-term buys.