The Zacks Aerospace-Defense Equipment industry comprises firms that manufacture a wide variety of vital components for the aerospace-defense space, ranging from aerostructures, space shuttles, propulsion systems, aircraft engines, defense electronics, missile and radar systems to flight test equipment, structural adhesives, instrumentation and control systems, communication products and many more. A few of these companies also offer integrated simulation and training services to the U.S. defense force.While the majority of revenues is generated from production of the aforementioned accompaniments, the industry players also generate revenues by providing notable aftermarket support and services like maintenance, repair and overhaul activities to aerospace and defense players.

4 Trends Shaping the Future of the Aerospace-Defense Equipment Industry

New M&As Instill Hopes: Rising competition has historically prompted industry majors to expand their product lines through small and medium-sized mergers and acquisitions (M&As) besides some big mergers witnessed in the industry. Notably, in May 2021, Teledyne Technologies completed the acquisition of FLIR Systems for $8 billion. Notably, the cameras and sensor systems that both Teledyne and FLIR Systems manufacture are uniquely complementary with minimal overlap. So, by acquiring FLIR Systems, Teledyne not only expanded its imaging sensor portfolio in terms of volumes but became set for production efficiency. In January 2021, TransDigm Group finalized the purchase of Cobham Aero Connectivity for approximately $965 million in cash. Such consolidations by leading industry players should improve economies of scale for the aerospace-defense equipment industry as a whole.

Improved Traffic Boosts Prospects: The year 2020 can be deemed as the worst year in the history of global air travel, with revenue passenger kilometers plunging 65.9% from 2019. However, optimism surrounding the arrival and initial distribution of vaccine has instilled confidence among travelers over the past couple of months. Resultantly, a gradual recovery has been observed in global air traffic. Looking ahead, the International Air Transport Association (IATA) forecast for 2021, released in April, indicates that air travel will recover to 43% of 2019 levels over the year. This reflects a 26% improvement from 2020. Overall passenger numbers are expected to reach 2.4 billion in 2021, which is an improvement on the nearly 1.8 billion who traveled in 2020. This surely indicates notable growth prospects for stocks in the aerospace-defense equipment industry, which have been generating dismal operational performance in the recent past, courtesy of the pandemic.

Socio-Political Uncertainty to Aid: Widespread geo-political as well as socio-economic tensions have been a growth driver for the aerospace and defense equipment industry for decades. In the recent times, escalating international terrorist attacks along with civil wars like the ones in the Middle East have been adding more impetus to this space. U.S. defense contractors’ prospects in this region were boosted by the conflict that took place between Israel and Palestine in May that involved a violent exchange of rockets and missiles in Gaza and parts of Israel. Another factor dominating geopolitics in the Middle East is the cold war between Israel and Iran. Both countries are set to host elections in 2021 and most analysts project that they will elect more hard-line leaderships that might lead to further confrontations. Such geopolitical tensions are expected to be beneficial for this industry.

Supply Chain Disruption Poses Risk: COVID-19 pandemic has led to an unprecedented crisis in the aerospace and defense (A&D) supply chain. Original Equipment Manufacturers (OEMs) needed to dramatically scale back their capacity to reflect the new realities of the commercial air travel market. Such OEM rate reductions have been affecting the extended commercial aerospace manufacturing supply chain, which might result in lower earnings and cash flows for the aerospace and defense industry in the near term.

The Zacks Aerospace-Defense Equipment industry is housed within the broader Zacks Aerospace sector. It currently carries a Zacks Industry Rank #171, which places it in the bottom 32% of more than 250 Zacks industries.

The industry’s position in the bottom 50% of the Zacks-ranked industries can be attributed to a negative earnings outlook for the constituent companies in aggregate. Looking at the aggregate earnings estimate revisions, it appears that analysts have lost confidence in this group’s earnings growth potential in recent times. Evidently, the industry’s earnings estimates for the current fiscal year have slipped 0.3% since Jan 31. 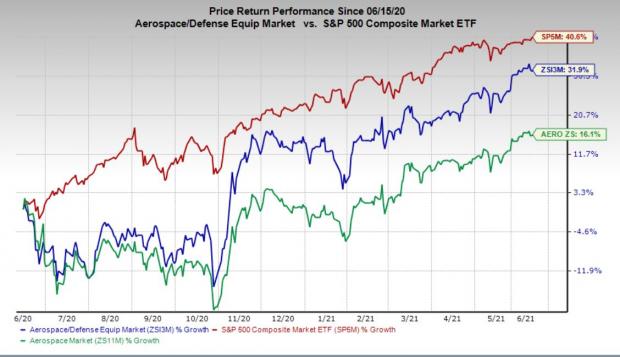 On the basis of trailing 12-month EV/Sales, which is used for valuing capital intensive stocks like aerospace-defense equipment, the industry is currently trading at 2.67X compared with the S&P 500’s 4.87X and the sector’s 2.84X.

4 Aerospace-Defense Equipment Stocks to Keep a Close Eye on

Raytheon Technologies: Based in Waltham, MA, Raytheon Technologies is an aerospace and defense company that provides advanced systems and services for commercial, military and government customers worldwide. With more than 100 years of experience, the company’s research and development team is creating breakthrough technologies in fields such as artificial intelligence, advanced propulsion, electrification and thermal management.

The Zacks Consensus Estimate for 2021 earnings indicates a 37% improvement year over year, while that for 2022 projects an increase of 27.4%. The company currently carries a Zacks Rank #3 (Hold). You can see the complete list of today’s Zacks #1 Rank (Strong Buy) stocks here. 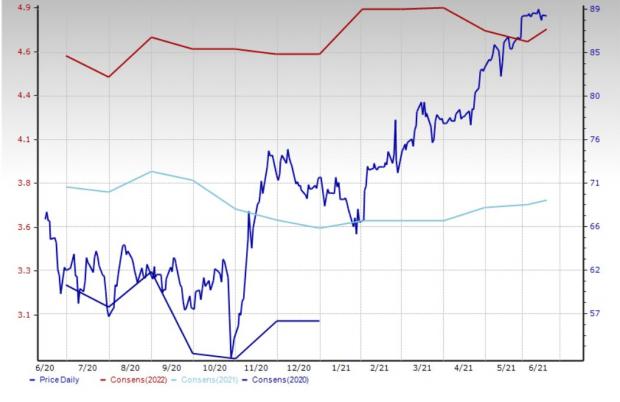 The Zacks Consensus Estimate for 2021 earnings indicates year-over-year improvement of 21.4%, while that for 2022 earnings implies 18.6% surge. The company currently sports a Zacks Rank #1. 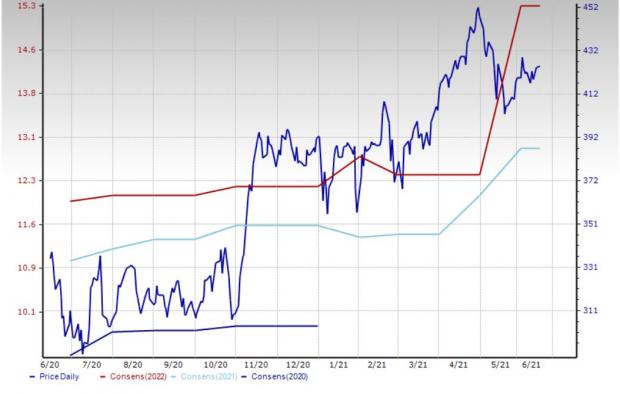 Transdigm Group: Based in Cleveland, OH, Transdigm Group’s diversified portfolio of highly engineered proprietary aerospace components enjoy solid demand in the aircraft market. In March 2021, the company signed an agreement to sell its ScioTeq and TREALITY Simulation Visual Systems businesses to OpenGate Capital for $200 million. Sale proceeds from such a transaction should boost this stock’s cash reserve. Its Esterline acquisition in 2019 expanded Trandigm’s market share significantly in the aerospace-defense equipment space, with significant aftermarket exposure.

The Zacks Consensus Estimate for fiscal 2022 earnings implies an improvement of 50.8% year over year. Its long-term earnings growth estimate is pegged at 13.7%. The company currently holds a Zacks Rank #3. 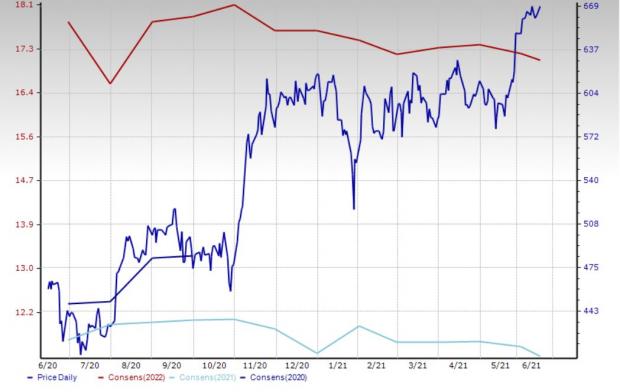 BAE Systems: U.K.-based BAE Systems is a well-known defense contractor that manufactures products ranging from warships, combat vehicles and aircraft to providing cyber security solutions.  The company’s frequent contract wins from across the globe fuel its overall operational performance.  BAE Systems in collaboration with UAVTEK has developed a nano “Bug” drone, the first 30 units of which have been delivered to the British Army, which has put it through its paces as part of a trial. Such innovations are surely going to expand the company’s footprint in the Aerospace sector.

The Zacks Consensus Estimate for 2021 earnings suggests an annual improvement of 22.43%, while that for 2022 indicates an increase of 27.4%. The company currently has a Zacks Rank #3. 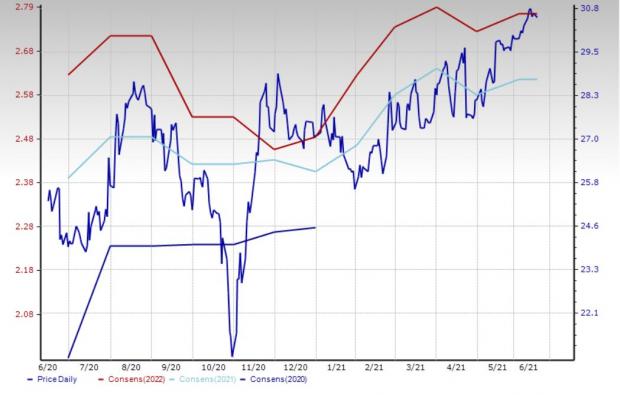