Shares in U.S. motorcycle manufacturer Harley Davidson (HOG - Free Report) traded lower by more than 4% on Monday after president Trump tweeted over the weekend that he supports customers who plan to boycott the company over their plans to shift some production overseas to avoid retaliatory tariffs in the European Union on their products. 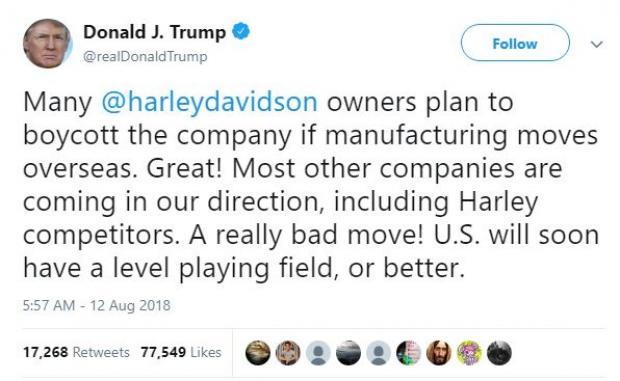 Announced in June, the EU’s tariffs raised the import tax on a wide range of American products from 6% to 31%. A big percentage of the products affected are agricultural goods and various types of steel and aluminum, but he EU appears to have targeted Harley Davidson as a uniquely American brand that’s especially popular in areas of the U.S. that supported President Trump in the 2016 election.

Europe has become an important market for the company as U.S. sales have slowed with the aging of their key demographics and a large number of used Harleys on the market suppressing demand for new motorcycles. Harley Davidson says the additional tariffs would add approximately $2,200 to the price of the average motorcycle they sell in Europe, a price increase they do not feel they can pass along to dealers or customers and remain competitive.

They also estimate that if they were to continue to manufacture motorcycles in the U.S. and ship them to Europe, the effect of the tariffs on their earnings could be as much as $100 million annually, or more than 10% of the amount they are expected to net in 2018.

Harley Davidson already operates factories in India and Thailand and plans to shift production of motorcycles for the European markets to those facilities to avoid the tariffs which apply only to imports from the U.S. The company states that they intend to continue manufacturing bikes for the U.S. markets at their four existing plants in Wisconsin, Missouri and Pennsylvania.

Even before the tariff situation, Harley Davidson had already been undergoing a significant transformation as worldwide consumer demand for its large, V-Twin motorcycles ebbs. The company has plans to produce smaller, lighter motorcycles with engines between 250 and 500ccs of displacement, primarily for the Indian market and also has a modern electric motorcycle in the works that’s expected to debut in 2019.

In their most quarterly recent earnings release, Harley reported net earnings of $1.45/share on revenues of $1.71B, both of which beat the Zacks consensus estimates by about 7%, though those expectations had already been lowered and were a decline of 2% and 3% respectively when compared to 2017 results.

Gross margins, operating margins and income from financing activities were all lower than 2017.

Harley Davidson is currently a Zacks rank #3 (Hold), but it’s not difficult to imagine downward revisions in the coming months as the trade wars grinds on.

Harley Davidson has stressed that the shift in manufacturing sites is not an attempt to reduce costs, but is intended only to avoid the crippling effect of the E.U tariffs, but that hasn’t saved them from the ire of president Trump who would like to see manufacturing grow in the U.S. rather than leave for foreign shores and who believes that their move undermines his hardline trade policies.

It’s a tough spot for them to be in. The likely financial effects of any boycotts are difficult to quantify, but the bad press can only be seen as a negative for sales in the U.S.

Harley Davidson is still the most recognizable and iconic name in the motorcycle business, and they’re wisely focusing on new markets and a new product mix to keep that position, but in the current political and global economic climate, it’s likely to be rough-riding for a while.


Wall Street’s Next Amazon Zacks EVP Kevin Matras believes this familiar stock has only just begun its climb to become one of the greatest investments of all time. It’s a once-in-a-generation opportunity to invest in pure genius. Click for details >>

Will Nvidia Continue its Bull Run Through Earnings?