We’ll start with the elephant in the room. First Cash, Inc (FCFS) is, at its core, an operator of pawn shops. Pawn shops often carry a negative connotation as seedy enterprises in a rough part of town that most consumers would actively seek to avoid.

It’s exactly that thinking that might cause some investors to overlook the entire industry, even though this growing collection of very well-managed and professional loan outlets combines very attractive rates on outstanding loans with retail outlets that sell goods at high margins. Pawn stores allow credit-constrained customers valuable access to needed cash, while providing the operators with an opportunity to make securely collateralized loans at much higher-than-average interest rates.

With almost 2,300 locations in the U.S., Mexico, Guatemala, El Salvador and Columbia, First Cash Inc (FCFS) is a leading operator of retail stores that offer short term loans as well as the sales of pre-owned jewelry, consumer electronics, power tools and musical instruments.

Approximately 75% of First Cash customers who take a loan secured with a personal asset pay back the loan in full and recover their collateral. The average service fee for these loans is 12-13% per month. Yes, that’s per month. Compare that to the average rate on a home equity loan – 5.75% annually – according to the latest data at Bankrate.com, or to the average auto loan at 4.74% - 5.34%, depending on the term and the age of the auto.

The other 25% of customers (who do not repay the loan) forfeit their collateral, which is then sold in the retail stores at an average margin of 35-40%. For comparison, gross margins at Walmart (WMT - Free Report) in 2018 were 25% and Apple’s (AAPL) have been consistently around 38%.

Unlike that single-outlet seedy pawn shop, the scale of First Cash’s operations means they can transport merchandise and sell items in markets to maximize both the rate of merchandise turnover and the prices received. Less than 1% of inventory for sale in the retail stores is over one year old.

In its most recent announcement, First Cash reported net earnings of $0.70/share – beating consensus estimates of $0.65/share, announced the acquisition of 62 additional stores while opening 16 unique outlets, confirmed full year guidance, announced the completion of a $100M share repurchase program announced last quarter and the authorization of an additional $100M buyback. Year to date, the company has repurchased over 2.6 million shares. 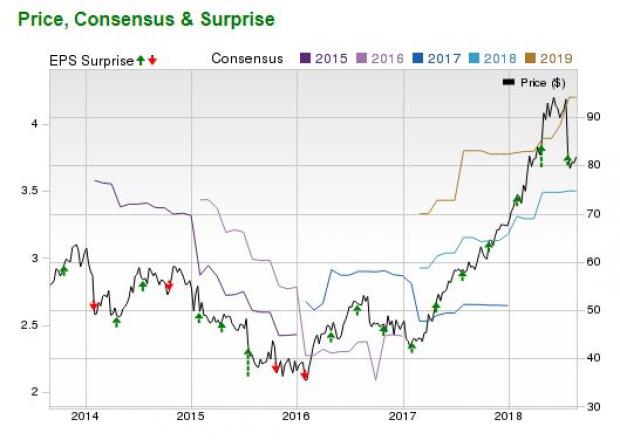 It’s common for investors to focus on household names in glamorous, high-tech industries at the expense of ignoring top-performers in less glamorous spaces. First Cash is an outstanding way for to gain exposure to the high-rate consumer loan business in a highly collateralized way.

5 Companies Verge on Apple-Like Run Did you miss Apple's 9X stock explosion after they launched their iPhone in 2007? Now 2018 looks to be a pivotal year to get in on another emerging technology expected to rock the market. Demand could soar from almost nothing to $42 billion by 2025. Reports suggest it could save 10 million lives per decade which could in turn save $200 billion in U.S. healthcare costs. A bonus Zacks Special Report names this breakthrough and the 5 best stocks to exploit it. Like Apple in 2007, these companies are already strong and coiling for potential mega-gains. Click to see them right now >>

Bull of the Day: Movado (MOV)