Bear of the Day: Beyond Meat, Inc. (BYND)

Beyond Meat (BYND - Free Report) stock skyrocketed during its first few months on the public markets back in the spring of 2019. It then tumbled back to earth and BYND has been on a wild up and down ride ever since, including a 20% decline in the past three months.

The plant-based meat firm has fallen well short of earnings estimates over the last year and BYND is projected to post an even larger adjusted loss in 2021.

Beyond Meat was founded over a decade ago and it sells so-called plant-based meats. The company and rivals aim to mimic the taste and consistency of real meat rivals, unlike veggie burgers and other offerings that have been around for longer. BYND has expanded its portfolio to include everything from multiple burger patties to sausages, chicken, and more.

The company’s diversification efforts include more affordable options and larger quantity packaging. Beyond Meat also boasts that its plant-based meats are healthier than traditional meat, but these claims have been disputed.

Therefore, its long-term success might hinge on its ability to sell consumers and Wall Street on its larger goals of shifting from animal to plant-based meat, to counteract what it calls “four growing issues attributed to livestock production: human health, climate change, constraints on natural resources and animal welfare.” 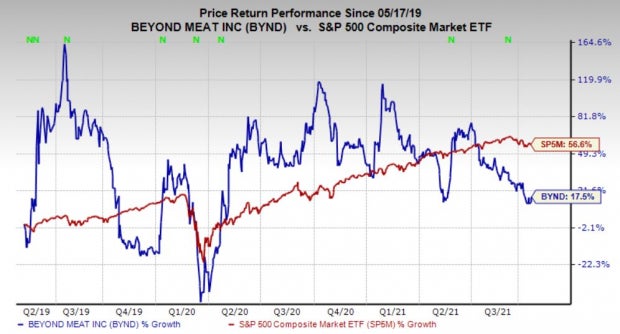 Beyond Meat has landed deals with firms like Dunkin’ and its packaged food can be found in stores everywhere from Safeway to Target (TGT - Free Report) .

Its sales soared by 239% in 2019, with FY20 revenue up 37% higher at $407 million. But the company is still losing money and it reported a larger-than-projected adjusted loss of -$0.31 a share in Q2. Management also warned at the time that covid could impact its near-term business in retail and foodservice.

BYND’s earnings revisions help it land a Zacks Rank #5 (Strong Sell) at the moment, alongside “F” grades for Value and Growth in our Style Scores system. And Wall Street is hardly high on the stock, with 11 of the 15 brokerage recommendations Zacks has at either “Holds” or worse.

Clearly, the stock could bounce back and go on another run. However, it appears to be more of a trader’s stock at the moment.

Bear of the Day: Docusign (DOCU)