Bull of the Day: Salesforce (CRM)

Salesforce (CRM - Free Report) was part of the vanguard of modern business software. The company’s various subscription-based offerings are now essential to thousands of customers in the digital-driven world. And CRM has expanded through some rather large acquisitions in the last several years to help it diversify as it competes for dominance in the ever-growing cloud software market.

Salesforce helped start the software-as-a-service industry that nearly every business, government, and countless other entities rely on to help them do just about everything. Its various divisions help support sales, marketing, commerce, customer and client engagement, analytics, app development, and more.

The company has grown its top-line at an impressive clip since its 2004 IPO. CRM posted between 25% and 30% sales growth in the trailing five years. Its steady double-digit expansion highlights the strength of its business model and the constant need for companies of all shapes and sizes to adapt to the quickly changing tech-fueled landscape.

The pandemic-driven remote work environment solidified its business. Salesforce posted record sales last year, with revenue up 24% to crack $20 billion for the first time. CRM also raised its guidance and it’s poised to thrive in the hybrid work environment.

Salesforce made a splash late last year when it announced its $28 billion deal to buy Slack. The company completed that purchase in July and it is expected to help CRM compete against Microsoft (MSFT - Free Report) and Zoom Video (ZM - Free Report) in the evolving work communication space. The deal comes roughly two years after Salesforce paid $15 billion for data-analytics platform Tableau.

Salesforce beefed up its offerings to help it continue to stand out in a crowded cloud-software space. Its growth outlook showcases the stability of its subscription model as well. Zacks estimates call for CRM’s FY22 (its current year) revenue to climb 24% to $26.3 billion, with FY23 projected to jump another 21% higher to come in at nearly $32 billion.

The tech firm’s adjusted FY22 earnings are projected to slip 10% from last year to $4.40 a share, with FY23 then set to bounce 4% above our current-year estimate.

Wall Street has looked beyond the YoY decline projections to Salesforce’s improving earnings estimates, which help it land a Zacks Rank #1 (Strong Buy) at the moment. The stock has also crushed our adjusted EPS estimates by an average of 68% in the trailing four quarters. 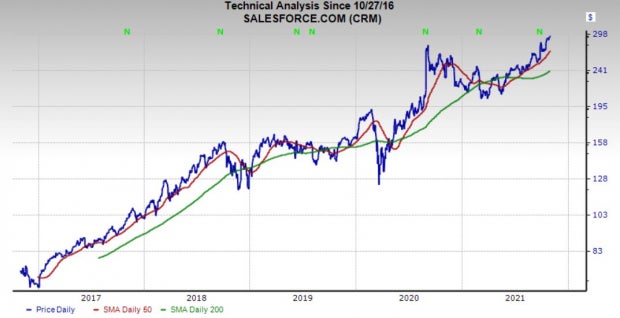 Salesforce shares have roughly matched the Zacks Computer Software industry over the past five years, up around 300%. CRM has jumped 90% in the last two years to lag just behind its industry. Salesforce shares have surged 25% in the trailing six months to outclimb its peers and it hit brand new highs Wednesday.

The stock has jumped to records amid the broader big-tech resurgence that’s sent the Nasdaq to new highs once again. Investors will, however, have to wait until early December for CRM to release its quarterly results, even as Apple (AAPL - Free Report) , MSFT, Amazon (AMZN - Free Report) , and many other tech titans report their financials during the last week of October.

Salesforce still trades at sky-high valuations in terms of forward earnings and it does not yet pay a dividend as it focuses on growth. But investors have been willing to pay up for CRM for years and largely ignored its P/E ratio. Despite sitting at records, CRM trades at a nearly 10% discount to its own year-long highs at 9.5X forward 12-month sales and 20% below its high-water mark when it comes to forward earnings.

The recent climb pushed Salesforce slightly above overbought RSI levels (70 or higher), with it currently hovering at 72. This could mean the stock is due for a near-term pullback, along with other tech names—the Nasdaq 100-tracking QQQ ETF is approaching overdone levels at 65, after hitting oversold territory in early October.

Still, investors with long-term horizons shouldn’t be nervous about buying stocks at their highs since timing the market is extremely difficult. And Wall Street is bullish on Salesforce, with 22 of the 26 brokerage recommendations Zacks has currently coming in at “Strong Buys.” None of the other recommendations are below a “Hold” and its overall rating has improved in the last several months.