Carrols Restaurant Group (TAST - Free Report) , one of the largest Burger King franchisees in the United States, is getting hit by inflationary pressures in 2021. This Zacks Rank #5 (Strong Sell) is expected to see a bigger earnings loss in 2021 compared to 2020, when the pandemic had shut many of its restaurants.

A Beat in the Third Quarter

But inflation and labor shortages really hit Carrols in the quarter.

Burger King traffic was about 95% of 2020 levels, however. But it offset that decline through higher pricing and reduced promotional activity. It also saw a nearly 5% delivery sales mix, which raised the average check by approximately 7.8%.

But ongoing staff issues resulted in $3.5 million in lost sales and impacted the Burger King comparables by about 1%.

But Popeyes were just 4.8% of Carrols total restaurant sales in the third quarter.

In response, Carrols has been raising prices. It took two price actions during the third quarter and another one in October to help manage the cost pressures.

Carrols believes it will be able to "claw back" a portion of the margin erosion as it moves into next year. This will be achieved through menu price actions taken to date and in the future combined with continued menu and promotional activity optimization.

Given all the challenges, it's not surprising that the analysts have gotten pessimistic on Carrols.

That's an earnings decline of 657% as the company only lost $0.07 last year during the height of the pandemic.

It's tough being in the restaurant business in 2021. Investors have been fleeing Carrols stock over the last several months, with the shares now hitting new 52-week lows, down 47% year-to-date. 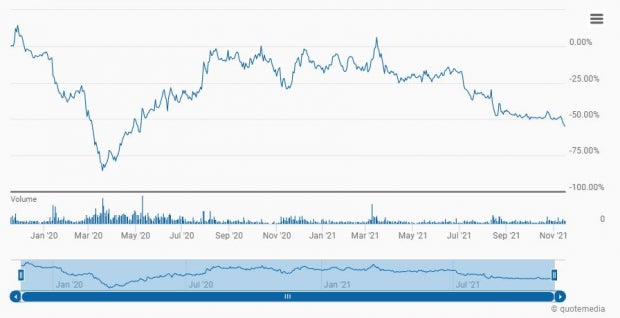 They haven't yet reached the coronavirus lows set last March however.

Until the pandemic challenges of inflation and labor shortages ease, hopefully, Carrols believes, by the second half of 2022, these shares are likely to continue to be pressured.

Investors should watch the analyst estimate revisions for clues on when things are expected to improve with Carrols.

Bear of the Day: Skechers (SKX)