Monday’s high-volume Valentine’s Day session showed love towards some of the best-positioned (and hardest hit) innovative equities for the next generation of accelerating digital-fueled economic growth, while blue-chip equities got the cold shoulder.

The public equity market rarely looks this hesitant, and St. Louis Fed President James Bullard is at the center of this precarious investor attitude. In a CNBC interview this morning, Bullard reiterated his hawkish position of a 50 basis point hike in March (opposed to the quarter-point rate hike standard) with designs on pushing the benchmark Fed Funds rate 100 basis points higher by July to get in front of what he sees as systemic inflation (wage growth is at the core of this argument).

Bullard made it clear that there has been contention among voting Fed officials concerning the level of monetary tightening necessary to stabilize prices. Many Fed members believe that a large portion of this excessive inflation will naturally correct in the coming months, with Omicron-variant disappearing allowing supply chain bottlenecks to clear up as the world gets back to work.

The credit markets are now pricing in an 82.4% probability of 6 or more rate hikes by the end of 2022. A massive swing from the 8.6% odds credit traders had given this hawkish scenario just 1 month ago.

The growth-oriented Nasdaq 100’s ability to remain buoyant in the face of these soaring interest rate expectations tells me the market has more than priced in aggressive monetary tightening. This market volatility will subside, and a bull rally will resume once the Fed’s rate hike path is cleared up (assuming Ukraine tensions don’t spill over into sentiment-crushing panic).

The S&P 500 chart is actually looking pretty bullish, despite our dip below its 200-day moving average (blue line) with bullish capital being deployed at this global public equity benchmark’s 61.8% Fibonacci-extension (buy targets) around 4365, which was drawn from January’s lows to February’s highs. 4365 also represents the S&P 500’s correction threshold (-10% or more off 52-week highs), making this technical level a more reliable dual support. 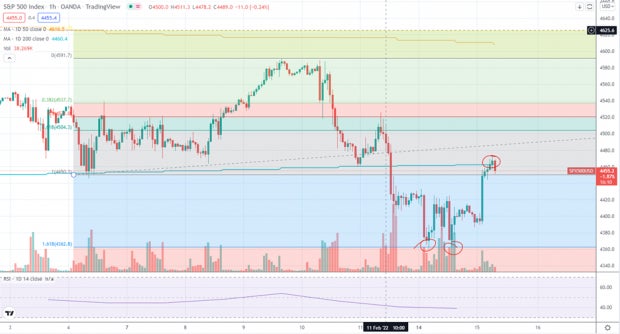 The market’s ability to bounce firmly off this vital support level this afternoon illustrates bullish intentions, but our inability to make it back to the 200-day MA depicts a lingering element of fear. We are now in a buy zone between the S&P 500’s correction threshold and its 200-day MA. I’m adding to spring-loaded market-disrupting innovators.

The Super Bowl holds some long-standing superstitions regarding the S&P 500’s performance in the upcoming year, coined the Super Bowl Indicator in 1978 by sports columnist Leonard Koppett of the New York Times. This is a fun little tidbit that really doesn’t hold any actual underlying market weight but has historically been inordinately accurate since its origin, with a 76% success rate (41 out of 55).

This baseless stock market predictor is centered on whether an NFC or AFC team wins the most-watched annual US sporting event. The indicator suggests that we will experience a bull market in the year that follows an NFC win (which includes the Steelers because of its 1933 origins in the NFL), and a bear market if an AFC team takes home the famous Lombardi trophy.

The Super Bowl Indicator had been 90% accurate in the first 3 decades of the NFL’s formation (beginning in the late 60s with nothing but convenient coincidence and a touch of animal spirits at play. NFC teams (plus the original NFL Steelers team) have won 33 of the past 50 Super Bowls (66%), and considering the notion that the stock market is generally in a bullish uptrend, this tendency has helped this unsubstantiated market theory hold.

Nevertheless, as we all know, causation doesn’t equate to correlations. Despite this credulous new market’s propensity for self-fulfilling prophecies, this indicator holds no more weight than the implications of Punxsutawney Phil’s shadow on the weather.

That being said, the LA Rams are an NFC team, so if animal spirits do decide to play a role in this precarious market, it’s pointing to a bullish year ahead.

This week’s market action (appropriately enough) will be focused on the slew of highly anticipated quarterly reports from next-generation enterprises who are looking to prove their secular-growth profiles as we exit the economic clutches of the pandemic. I will be looking from post-earnings bounces from many of these heavily discounted equities.

Airbnb ABNB and Roblox RBLX will be revealing their first full fiscal year of results as public enterprises Tuesday afternoon (2/15), along with Toast and SolarEdge SEDG, after being dragged into bear market territory (20% or more off recent highs) in the past few months. Marriott (MAR - Free Report) and Wynn Resorts (WYNN - Free Report) will also report Tuesday, providing a fresh take on the travel & leisure space.

Retail sales data from January will be hitting the ether Wednesday before the opening bell (2/16), and economists’ consensus estimates point to a 2% jump compared to the -1.9% slip we saw in December (0.8% & -2.3% if you excluded automotive sales, respectively).

FOMC Minutes from last month’s Fed meeting will be released Wednesday at 2:30 EST. This look into the Fed’s January meeting discourse will be the week’s primary focus. Hopefully, this release will provide further clarity on how hawkish the US’s Central Bankers are really getting in the face of unprecedented 7.5% inflation.

FOMC Minutes will likely be the most meaningful release of the week, with investors looking for more color on the level of apparent dissent among FOMC members. This point has been illustrated by Bullard’s outspoken hawkish opinions about moving rates up more quickly than he said other voting Fed officials deem necessary.

Economic reports have been more influential on the public equity market than ever before due to this wait-and-see monetary approach that Fed Chair Jerome Powell has made clear will be predicated on new economic data.