3 Stocks to Watch From the Prospering Entertainment Industry

The Zacks Film and Television Production and Distribution industry is benefiting from a spike in demand for digital entertainment fueled by capacity and operational limitations in movie theaters, theme parks and cruise lines and continued restrictions on travel. Increased consumption of media, music and news over the web due to the pandemic-induced lockdowns and shelter-at-home guidelines has been a key catalyst for industry participants like News Corporation (NWSA - Free Report) , World Wrestling Entertainment (WWE - Free Report) and IMAX (IMAX - Free Report) . Steady recovery in the advertising spending environment and resumption of production pipelines bode well for film and television production companies.

The Zacks Film and Television Production and Distribution industry comprises companies involved in film and TV production, distribution and exhibition. The main activities of the industry participants include the production and distribution of entertainment content to theaters, TV networks, video-on-demand platforms, streaming services and other exhibitors. Imax offers entertainment technology, and specializes in motion picture technologies and presentations. Industry participants produces and distributes motion pictures for theatrical and straight-to-video release besides TV programming. These players are heavily dependent on the box-office performance of their films, both domestically and internationally, the number of film releases and ratings of TV shows.

3 Film and Television Production Industry Trends to Watch Out For

Over-the-Top Services Gaining Prominence: Companies involved in content creation are looking to distribute content through over-the-top services to leverage the popularity of their franchises. With this, they are looking to provide exclusive content and a differentiated experience. However, streaming companies are increasingly producing original and award-winning feed to reduce licensing costs and excessive dependence on third-party content providers. This is likely to hurt industry participants’ content distribution strategy.

Binge-Watching Driving Consumption: Factors such as binge watching, deepening Internet penetration and advancement in mobile, video, and wireless technologies have got viewers glued to small screens. In order to keep pace with new consumption patterns, industry participants are turning to digital content distribution. The emergence of digital capabilities is making consumer data easily available to companies. With the use of AI tools, production houses are gaining a better understanding of user preference. This is helping them produce content that strikes a chord with viewers. However, increasing spending on content and sales & marketing is hurting profitability due to stiff competition from streaming players.

Technological Advancement Aids Prospects: Exhibitors are turning to highly efficient and cost-effective technologies like laser-based projection systems to enhance image quality and the entire movie experience. Additionally, the use of technologies like motion seating, immersive audio systems and interactive movies among others is expected to enhance the viewing experience. The increasing adoption of AR and VR technologies bodes well for industry participants. However, the evolution of alternative motion picture distribution channels such as home video, pay-per-view, streaming services, video-on-demand, Internet and syndicated and broadcast television is hurting exhibitors.

The Zacks Film and Television Production and Distribution industry is housed within the broader Zacks Consumer Discretionary sector. It carries a Zacks Industry Rank #78, which places it in the top 31% of more than 250 Zacks industries.

The Zacks Film and Television Production and Distribution industry has underperformed the Zacks S&P 500 composite but beat its own sector in the past year.

The stocks in this industry have collectively lost 12.4% compared with the S&P 500’s rally of 14.9% and the Zacks Consumer Discretionary sector’s decline of 22.9% over the same time frame.

On the basis of the trailing 12-month price-to-sales (P/S), a commonly used multiple for valuing Film and Television Production and Distribution stocks, the industry is currently trading at 1.69X compared with the S&P 500’s 4.74X and the sector’s 2.36X.

Over the past five years, the industry has traded as high as 2.48X and as low as 0.92X, recording a median of 1.49X as the chart below shows.

News Corporation: The company is benefiting from prudent strategic efforts, which include the ongoing digital transformation of the business, and investments in the Digital Real Estate Services, Dow Jones and Book Publishing segments.

News Corporation has been diversifying revenue streams through strategic acquisitions and operational enhancement. It is optimistic about acquisitions of the OPIS and Base Chemicals businesses that are likely to enhance Dow Jones’ information services business.

News Corporation is well-positioned to grab opportunities generated from technology sharing across geographies and businesses, and bundled offerings of enriched content to consumers and advertising partners.

News Corporation’s shares are up 1.2% year to date. The Zacks Consensus Estimate for this Zacks Rank #1 (Strong Buy) company’s fiscal 2022 earnings has moved up 13.8% to 74 cents per share over the past 30 days. You can see the complete list of today’s Zacks #1 Rank stocks here. 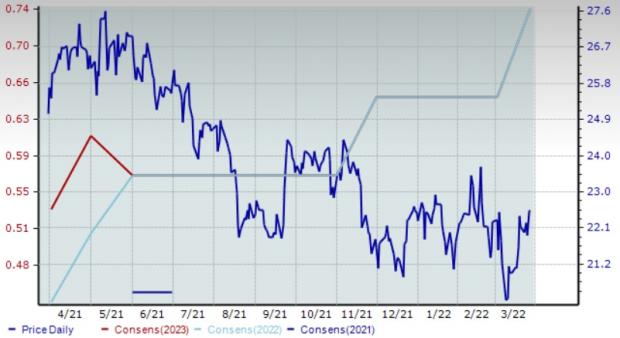 World Wrestling Entertainment: Shares of this Zacks Rank #1 company are up 23.7% year to date. WWE has been gaining from return of live events, as pandemic-led restrictions ease.

For 2022, WWE guided adjusted OIBDA in the range of $360-$375 million, reflecting 10-15% year-over-year growth. Markedly, WWE has been expanding its reach across platforms such as Peacock and Spotify and establishing new sponsor and product partners.

The Zacks Consensus Estimate for World Wrestling’s 2022 earnings has been steady at $2.48 per share over the past 30 days. 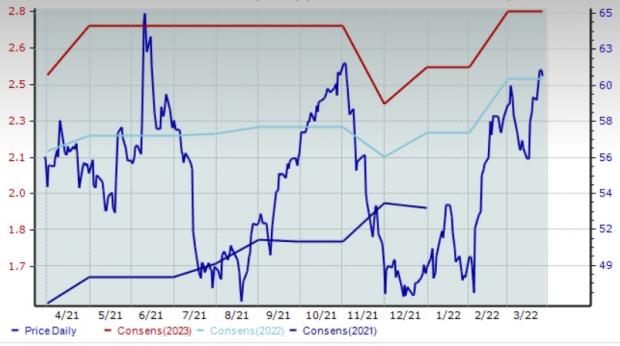 IMAX: This Zacks Rank #3 (Hold) company is riding on continued reopening of theaters, particularly in the United States.

The impressive performance of the Spider-Man: No Way Home benefited IMAX. Recovery in the pace of theater system installations and higher IMAX maintenance sales are major positives. Moreover, a steady cash balance and flexible business model position it well to make it through coronavirus-led business disruption. Further, a solid slate of movie releases is expected to aid the top line in 2022.

The Zacks Consensus Estimate for IMAX’s 2022 earnings has been steady at 59 cents per share over the past 30 days. IMAX’s shares have returned 9% year to date. 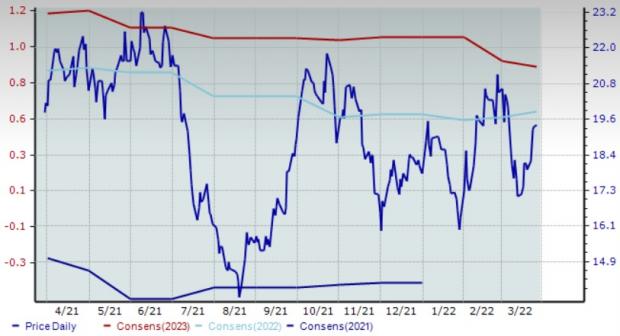