Elon Musk, the man behind the all-mighty Tesla (TSLA - Free Report) , has quickly become a figure that investors always keep close tabs on. Whether it be cryptocurrency or stocks, all he needs to do is comment about a particular asset for it to skyrocket or dive.  Simply put, he’s a potent influential force in the market.

Of course, the most exciting development surrounding him over the last month has been his plans to purchase the social media platform Twitter (TWTR - Free Report) . In early April, he revealed to the world a 9% stake in the company, and TWTR shares exploded with a 27% gain, causing shares to reach their highest levels since last November.

Shortly after, he announced his plans to purchase the social media platform for a steep $44 billion and further announced his desire to take the company private. It came as a slight surprise, but many believed that the acquisition was foretold whenever he became the company’s largest shareholder just a few weeks before. Twitter’s board unanimously approved the acquisition at a $54.20 per share price tag.

This morning, the fun came to an abrupt halt whenever Elon tweeted that the deal was temporarily on hold, pending details and clarity of an issue within Twitter’s userbase. A report came out that less than 5% of Twitter’s users across the board are fake or spam accounts; the Tesla CEO wants to make sure that this is true. After all, if a user base highly consists of fake accounts with no real person behind them, it questions the social media’s true success and value.

Following his tweet about his concerns of the userbase, TWTR shares got sent down the drain in pre-market trading from around $46 to $33.50 within a matter of minutes. It was quite the nasty drop, although his concerns were very valid. However, a few hours later, he revealed that he was still committed to the acquisition, giving some relief.

Clearly, his acquisition has been and will be a significant driving force of TWTR shares until a more definitive answer on the matter becomes clearer.

Of course, Elon’s bread and butter is Tesla (TSLA - Free Report) . The company has thrust itself into one of the most widely-followed stocks globally and has been one of the biggest winning investments of the last decade. The company’s primary focus is electric vehicles (EVs), although it has other operations within the solar business as well.

A big concern of TSLA shareholders is that Elon will be spread too thin across all of his responsibilities upon the closing of the acquisition of TWTR (if it happens). The share performance of both companies since the announcement of his original stake paints an interesting picture. 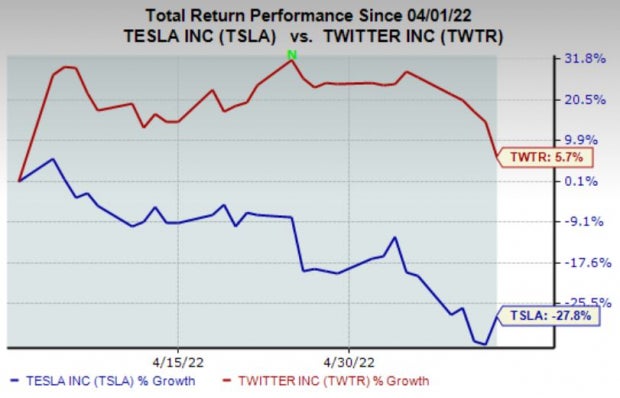 TWTR shares have been much stronger over this timeframe, while TSLA shares have suffered. In fact, it’s been a brutal 2022 all around for TSLA shares, down nearly 26% year-to-date and vastly underperforming TWTR. 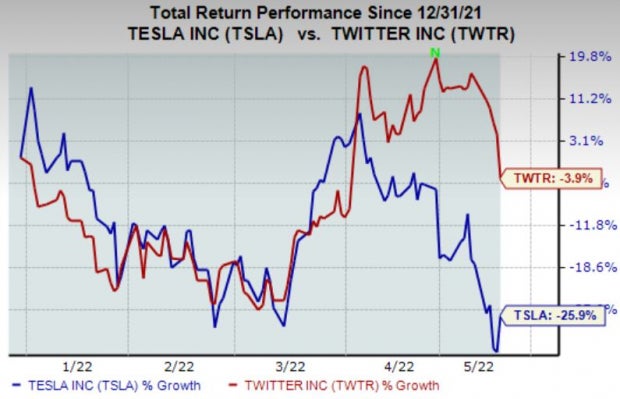 Upon his tweet this morning of the deal being on hold, Tesla shares rallied in the pre-market – perhaps a sign that TSLA investors prefer it if the deal isn’t closed.

It’s speculated that the widely-hailed Tesla CEO doesn’t have enough time on his hands to navigate both companies properly, but many believe that this will not be an issue.

Nonetheless, TSLA has been firing on all cylinders outside its share performance. Over its last four quarters, the company has acquired an average EPS surprise in the double-digits of 41%, and in its latest quarterly report, the company crushed the Zacks Consensus Estimate by nearly 50%. Additionally, the current year’s Consensus Estimate Trend has increased almost 10% to $13.57 per share over the last 60 days, reflecting year-over-year growth in earnings of a whopping 68%.

Tesla has also been on a quarterly revenue hot streak, exceeding quarterly sales expectations ten times in a row, and beating sales estimates by nearly 9% in its latest quarterly release. For FY22, the Zacks Consensus Sales Estimate has the company raking in $87 billion in revenue, a spectacular 62% year-over-year increase from FY21. 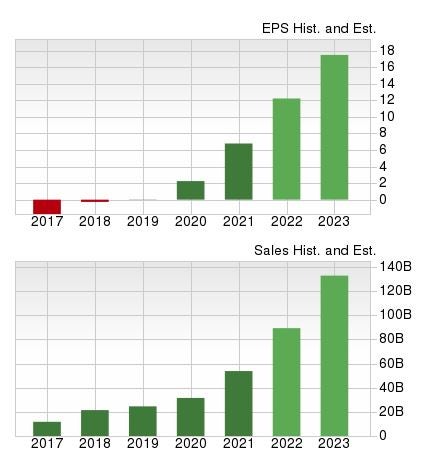 The deep valuation slash in Tesla’s shares year-to-date has brought valuation metrics down to more reasonable levels. Its forward price-to-sales ratio sits at 8.6X, nearly a third of its 23.9X high in late 2021. The ratio is slightly above its median of 4.6X over the last five years but is still the lowest since August 2020.

TSLA is currently a Zacks Rank #3 (Hold) with an overall VGM Score of an A.

Elon set out to buy Twitter to uphold the integrity of social media, as many people now see these platforms as potentially harmful to society and nothing but places where negativity is widespread. It will be wildly interesting to see what the Tesla CEO has in store if the deal goes through.

Companies such as Meta Platforms (FB - Free Report) and Snapchat (SNAP - Free Report) have all been able to find success with diverse revenue streams, while Twitter has seemingly remained stagnant. As of now, TWTR’s share price is well below the agreed-upon price, which also makes the development much more interesting.

He revolutionized the payments space with PayPal (PYPL - Free Report) , the EV industry with Tesla, and now he is looking to try his hand at social media as well. Nobody knows if the deal will officially go through, but if it does, market participants are hoping that it doesn’t pull him too far away from Tesla.

Disney vs. Netflix: Which Company Deserves Your Cash?