Abercrombie & Fitch Company (ANF - Free Report) operates as a global specialty retailer of casual apparel for men, women and kids under recognized brands such as Hollister, Abercrombie, Seagull and Social Tourist. The company sells an assortment of personal care products, innerwear, sleepwear, and at-home products in addition to its apparel offerings. ANF markets its products through its 729 retail stores as well as online. Abercrombie & Fitch was founded in 1892 and is based in New Albany, OH.

Abercrombie & Fitch, a Zacks Rank #5 (Strong Sell) stock, has been severely underperforming the market over the past year. ANF experienced a climax top in June of last year and has been in a price downtrend ever since. The stock is hitting a series of 52-week lows and represents a compelling short opportunity as the market continues its volatile start to the year.

Abercrombie & Fitch is part of the Zacks Retail – Apparel and Shoes industry group, which currently ranks in the bottom 22% out of approximately 250 industries. Because this industry is ranked in the bottom half of all Zacks Ranked Industries, we expect it to underperform the market over the next 3 to 6 months. This industry has fallen -37.78% year-to-date.

Candidates in the bottom half of industry groups can often represent solid potential short candidates. While individual stocks have the ability to outperform even when included in poor-performing industries, their industry association serves as a headwind for any potential rallies.

Earnings misses have been a sore spot for ANF as of late. The specialty retailer has fallen short of estimates in each of the past two quarters. ANF most recently reported a Q1 loss last week of $-0.27 per share, missing the $0.08 consensus estimate by -437.5%. This is the type of negative trend that bears like to see.

ANF has posted an average earnings miss of -73.83% over the past four quarters. Analysts have been revising earnings estimates downward as of late. For the current quarter, estimates have been slashed -72.63% over the past 60 days. The Q2 Zacks Consensus EPS Estimate now stands at $0.26, translating to an -84.71% earnings regression relative to the same quarter last year.

ANF stock has been steadily falling since last year and has now established a well-defined downtrend. Notice how the 200-day (blue line) moving average is sloping down and has acted as resistance in the recent past. Shares have declined more than 48% in the past year. The stock continues to trade below the 200-day average: 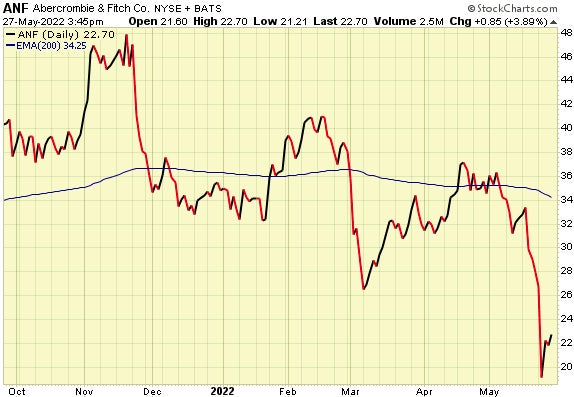 Abercrombie & Fitch has continued its descent into the new year, with shares falling over 35% and showing little sign of a reversal.

The recent earnings misses in addition to deteriorating estimates are both huge red flags and need to be respected. These will likely serve as a ceiling to any potential rallies, nurturing the stock’s downtrend.

ANF’s characteristics have resulted in a Zacks Momentum Style Score of ‘C’, indicating further downside is likely. The fact that ANF is included in a bottom-performing industry group simply adds to the growing list of concerns. Investors will want to steer clear of ANF until the situation shows major signs of improvement, or possibly include it as part of a hedge or short strategy.