Consumer sentiment is tumbling as people stare at sky-high gas prices and grocery bills. Inflation remains at 40-year highs and many consumers are already cutting back on major expenses and looking for savings anywhere they can.

Discount retail standout Dollar Tree, Inc. (DLTR - Free Report) has grown during an array of economic environments and it’s poised to thrive as more Americans tighten their purse strings. Dollar Tree posted solid first quarter growth in late May and upped its guidance in the face of all of the broader economic headwinds.

Dollar Tree is a discount retailer that operates over 15,500 stores across much of the U.S. and Canada, including its namesake locations, Family Dollar, and newer combo stores. The retailer’s dollar-focused name until recently showed up exactly in its price points, with everything at Dollar Tree stores priced at $1.

Dollar Tree announced last November that it was raising its prices for the first time in company history. Dollar Tree slowly began to implement its new $1.25 price points. DLTR said in March that it completed its new price-point rollout at all U.S. Dollar Tree stores a full two months ahead of schedule.

Many on Wall Street initially speculated that Dollar Tree’s new higher prices were made in response to inflation. However, the company’s executive team said the move was made after roughly 35 years at the $1 price point in order to expand its offerings and sell a far wider range of merchandise to customers.

Meanwhile, its Family Dollar stores sell many items at the $1 price point, along with a broader array of offerings under $10. Dollar Tree also said in March that it saw strong performances in other newer areas, including the expansion of its “$3 and $5 Plus assortment in Dollar Tree stores, as well as our Combo Stores and H2 Renovations at Family Dollar.”

Dollar Tree operates smaller format stores compared to the likes of Target (TGT - Free Report) and Walmart (WMT - Free Report) and it has been aggressively expanding its brick-and-mortar footprint. DLTR opened 112 new stores during its first quarter ended on April 30, while also completing numerous renovations and rolling out its multi-price “Plus” offering into an additional 790 Dollar Tree stores. 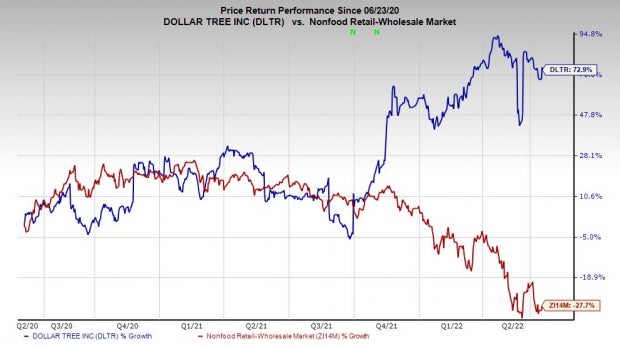 Dollar Tree has grown its revenue rather steadily for decades and its sales soared after it purchased Family Dollar in 2015. DLTR’s sales climbed 3% last year and 8% in FY20, while its adjusted earnings popped 2.7% in fiscal 2021. Most recently, DLTR topped our Q1 FY22 EPS and sales estimates on May 26 and raised its guidance.

The company’s new higher prices appear to be showing up on both the bottom and top lines, with Dollar Tree’s adjusted Q1 EPS up 48% YoY. Meanwhile, its revenue climbed 6.5% to $6.9 billion, with same-store Dollar Tree sales up +11.2%.

Dollar Tree has now topped our quarterly EPS estimates by an average of 13% in the trailing four periods, and its FY22 consensus estimate is up 3% since its release, with FY23 5.5% higher. These positive bottom-line revisions came in the face of slowing overall consumer sentiment, rising inflation, and lower guidance from many companies across an array of industries.

Dollar Tree shares have soared 970% in the past 15 years to crush its discount retail industry’s 500% and blow away the broader retail-wholesale market’s 207%.

The company has also been a standout since last fall, with DLTR up 53% in the last 12 months vs. its sector’s 34% downturn. This run includes an 11% jump in 2022, which is rather impressive with the market down over 20%.

Investors should note that DLTR stock tumbled after Target’s brutal guidance in mid-May, only to skyrocket back after its own quarterly results and guidance showcased strength amid changing shopping patterns. Dollar Tree closed regular trading Wednesday at $155 per share or roughly 12% below its records.

In terms of valuation, Dollar Tree trades at a 16% discount to its industry at 18.2X forward 12-month earnings and 23% below its own highs over the past 10 years. Dollar Tree also boasts a solid balance sheet, and it’s committed to long-term expansion within a segment of the retail sector that’s never going out of style.

Dollar Tree’s strong earnings revisions activity helps it land a Zacks Rank #1 (Strong Buy) right now. And investors might want to consider the firm for its ability to expand during an inflationary environment as people look to save money wherever they can. Plus, its new $1.25 price point is set to boost its earnings and revenue growth over the long haul.