For a quick, somewhat simplistic definition, cloud computing is the delivery of computing services – including servers, storage, databases, networking, software, analytics, and intelligence – over the internet to offer accelerated innovation, flexible resources, and economies of scale.

The “cloud” is incredibly secure, fast, and reliable. In addition, it eliminates the need to buy expensive hardware.

Three big players in the cloud computing realm include Amazon (AMZN - Free Report) , Alphabet (GOOGL - Free Report) , and Microsoft (MSFT - Free Report) . All three companies’ shares have been strong over the last month, as illustrated in the chart below. It seems that the market has finally found some buyers.

Let’s dig deeper into each company.

In addition, Nasdaq has shared its multi-year partnership to migrate its markets onto AWS to become the world’s first fully enabled, cloud-based exchange – undoubtedly a major positive.

In the company’s latest quarterly print, AWS net sales came in at a strong $19.7 billion, a solid 7% increase from the prior quarter and a sizable 33% year-over-year increase.

The long-term growth of AWS is even more impressive – for the current fiscal year, AWS is forecasted to rake in $81.8 billion in net sales, a remarkable 370% increase from 2017 annual net sales of $17.4 billion.

Furthermore, AWS will significantly aid the company’s top-line – Amazon is forecasted to rake in a mighty $524 billion in revenue in FY22, notching a notable 11.6% year-over-year uptick from FY21. Below is a chart illustrating the company’s revenue on an annual basis.

Of course, the growth is projected to continue at a breakneck pace – for the company’s current fiscal year, Intelligent Cloud revenue is forecasted to climb to $91 billion, reflecting a 21% double-digit uptick year-over-year.

Additionally, MSFT believes that cloud technology will be a critical growth driver of its top line in the future, and projections reflect that; for the current fiscal year (FY23), Microsoft is forecasted to rake in $219 billion in revenue, a rock-solid 11% year-over-year uptick.

Google Cloud consists of a set of physical assets, such as computers and hard disk drives, and virtual resources, such as virtual machines (VMs), that are contained in Google's data centers around the globe.

In the tech titan’s latest quarterly print, Google Cloud revenue was reported at $6.3 billion, good enough for a solid 9% increase from the prior quarter and a double-digit 37% year-over-year increase.

In addition, Google Cloud revenue is forecasted to continue its growth trajectory, with the $26.8 billion revenue estimate for the current fiscal year displaying an impressive 40% uptick year-over-year.

Alphabet has stated multiple times that the cloud will be a long-term focus. In its latest quarter, Sundar Pichai, CEO of Alphabet, said, “On Cloud, we continue to see strong momentum, the substantial market opportunity here, and it still feels like the early stages of this transformation.”

Like MSFT and AMZN, the cloud is expected to drive top-line growth. For the company’s current fiscal year, revenue is forecasted to surge 12%, up to $237.7 billion. 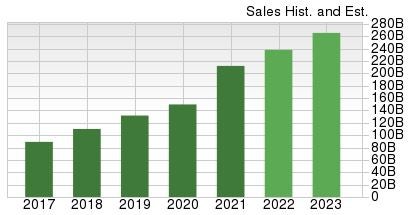 Cloud computing is a fascinating industry that’s taken off over the last several years. While many believe that we’re still in the early stages of this transformation, Microsoft, Amazon, and Alphabet have all been at the forefront, getting in “early.”