Bear of the Day: Trex (TREX)

Trex Company, Inc. (TREX - Free Report) had a great second quarter but warned on the rest of the year as the pro-channel prepares for an economic slowdown. This Zacks Rank #5 (Strong Sell) is now expected to see earnings decline in 2022.

Trex is the largest manufacturer of high-performance, low-maintenance wood alternative decking and railing. It's stocked in more than 6,700 retail locations worldwide.

In addition, Trex is also the leading national provider of custom-engineered railing systems for the commercial and multi-family market, including performing arts venues and sports stadiums.

Another Big Beat in the Second Quarter

On Aug 8, Trex reported its second quarter earnings and beat the Zacks Consensus Estimate by $0.11. Earnings were $0.79 versus the consensus of $0.68.

It was the 13th earnings beat in a row, going back to 2019. The company never missed during the pandemic years. That's impressive.

Sales rose 24% to $386 million, boosted by favorable pricing as well as mid-single digit growth in volume at Trex Residential, reflecting both consumer demand and continued distributor inventory build, especially in the pro channel.

In the second quarter it expanded the premium Transcend decking portfolio line by launching Trex Transcend Lineage decking. It features trend-forward colors with heat mitigating technology features and is, like all Trex decking, made from 95% recycled and reclaimed content.

It's the company's first major product launch since 2019.

Slowing Expected in the Second Half of 2022

"Although we believe consumer demand for Trex decking and railing products remains healthy, in late June, we experienced a sudden reduction in pro-channel demand, as our partners began to adjust their inventory levels to align with expectations for an economic slowdown," said Bryan Fairbanks, CEO.

"Accordingly, we anticipate a significant reduction in revenues in the second half of 2022 as consumer demand is filled by existing channel inventories," he added.

Third quarter revenue is expected to range from $185 million to $195 million, which is down dramatically from the third quarter of 2021 when it was $336 million.

Fourth quarter revenue is now forecast to plunge as well, to a range of $180 million to $190 million from $304 million last year.

With revenue set to decline, it's not surprising that the analysts cut earnings estimates. 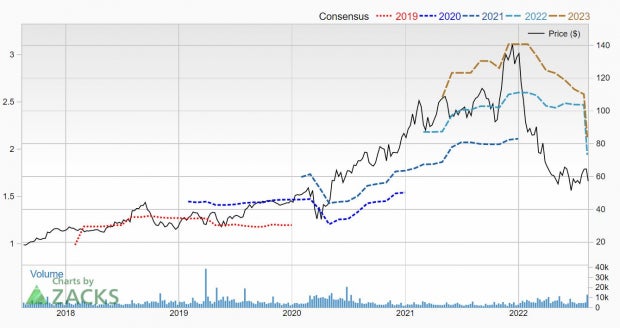 Trex shares were already weak before this warning on the second half of the year. 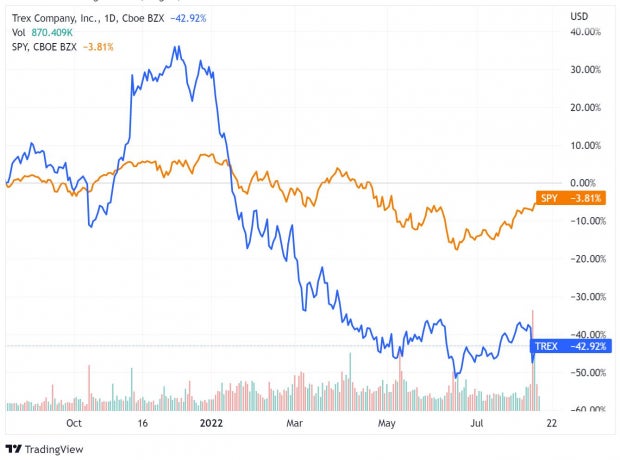 But with estimates being cut, they aren't cheap on a forward P/E basis with a P/E of 29.5.

Trex is shareholder friendly and has a big share buyback program, however. It repurchased 2.8 million shares in the second quarter at an average price of $60.39.

It has 4.3 million shares remaining under the program.

But given the gloomy outlook, the shares may have further to fall. Investors might want to wait on the sidelines until the inventory is worked through and the outlook improves.