Sail Through Rough Waters With These 3 Low-Beta Stocks

When looking for safe places to park cash during heightened volatility, targeting low-beta stocks is an excellent strategy that investors can deploy.

Beta is a measure of a stock's systematic risk, or volatility, compared to the market as a whole. Generally, the benchmark is the S&P 500, which has a beta of 1.0.

On top of carrying a beta of less than 1.0, all three have rock-solid dividend metrics, a significant positive that helps alleviate drawdowns in other positions.

Below is a chart illustrating the share performance of all three companies year-to-date, with the S&P 500 blended in as a benchmark. 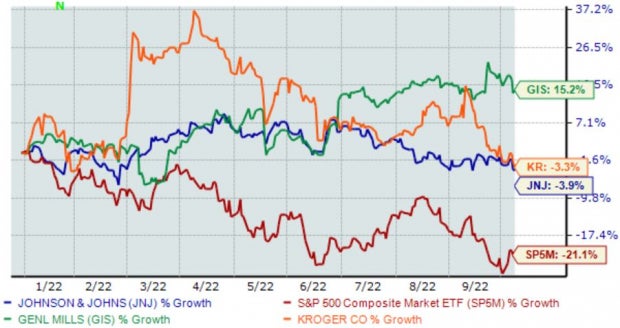 As seen above, all three have widely outperformed the general market in 2022, indicating that buyers have defended the stocks at a much higher level than most.

Let’s take a deeper look at each one.

General Mills is a global manufacturer and marketer of branded consumer foods sold through retail stores. We see their products on nearly every shelf.

The company has witnessed positive earnings estimate revisions as of late, helping push the company into a favorable Zacks Rank #2 (Buy).

For those seeking an income stream, General Mills has that covered; the company’s annual dividend yields a rock-solid 2.8% paired with a payout ratio sitting at 53% of earnings.

The company’s annual dividend yield is just a tick below the Zacks Consumer Discretionary sector average of 2.9%.

The earnings growth comes on top of forecasted revenue increases of 2.8% and 2.2% for FY23 and FY24, respectively. 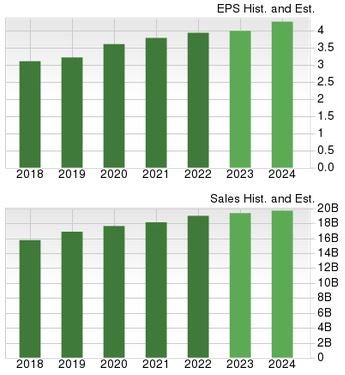 Johnson & Johnson has been heavily dedicated to rewarding its shareholders; the company is a member of the elite Dividend King club, upping its dividend payout for a mind-boggling 60 consecutive years.

The company’s annual dividend yields a sizable 2.8%, notably higher than its Zacks Medical sector average of 1.5%.

JNJ has an impressive earnings track record – the company hasn’t reported earnings below the Zacks Consensus EPS Estimate dating all the way back to 2012. Just in its latest print, JNJ penciled in a marginal 0.8% bottom line beat.

Sales results have also been commendable, with JNJ exceeding revenue estimates in seven of its last ten quarterly reports. Below is a chart illustrating the company’s revenue on a quarterly basis.

In addition, JNJ shares appear reasonably priced, further bolstered by its Style Score of a B for Value.

Shares trade at a 16.0X forward earnings multiple, a few notches below their five-year median of 16.8X and representing a sizable 24% discount relative to their Zacks Medical sector.

Founded in 1883, the long-time retailer operates approximately 2,700 retail stores under various banners and divisions in 35 states.

Like General Mills, analysts have been bullish on Kroger’s near-term earnings outlook over the last several months, helping land the stock into a Zacks Rank #2 (Buy).

KR shares are cheap; the company’s 10.8X forward earnings multiple is nicely below its 12.6X five-year median and reflects a steep 55% discount relative to its Zacks Retail and Wholesale sector average.

For the cherry on top, KR rewards its shareholders via its annual dividend that yields a respectable 2.4%, notably higher than its Zacks Sector average of 1%.

KR’s dividend growth is even more impressive – the company has upped its dividend payout five times over the last five years, paired with a double-digit 13.2% five-year annualized dividend growth rate.

With the market sailing through a historically-volatile year, it goes without saying that adding some defensive stocks would benefit investors.

Low-beta stocks are a great way to shield yourself against volatility, as they are less susceptible to the market’s moves.

Of course, some gains could be missed, but defense wins ballgames.