The Zacks Alternative Energy industry can be fundamentally segregated into two sets of companies. While one group is involved in the generation and distribution of alternative energy and electricity from sources like wind, natural gas, biofuel, hydro and geothermal, the other set is engaged in the development, design and installation of renewable projects involving these alternative energy sources. The industry also includes a handful of stocks that offer fuel cell energy solutions, which have gained popularity as an affordable clean energy of late. Per a report by the U.S. Energy Information Administration, in 2021, renewable energy provided about 12.16 quadrillion British thermal units (Btu), which is equal to 12% of total U.S. energy consumption.

Wind Energy – A Key Growth Catalyst: Among alternative energy sources, wind energy continues to make noticeable progress in the United States. Per American Clean Power Association’s (ACPA) report published in December 2021, expanded offshore wind leasing in the United States has the capacity to generate up to $4.5 billion in new federal revenues and lead to $120 billion in clean energy investments. This reflects the rapid growth pattern observed in the wind energy industry, which must have encouraged ACPA to make such a solid projection. Notably, a steadily decreasing input price, along with an increasing flow of investments from all over the world, has been instilling growth in the wind industry. The unsubsidized cost of energy for wind power has fallen 71% from 2009 to 2020. Such factors must have paved the way for EIA to forecast wind capacity additions of 11 gigawatt (GW) at 2022-end in its latest Short-Term Energy Outlook. This implies a solid opportunity for the U.S. wind market currently, which should boost the overall expansion of the alternative energy industry.

Solid H2 Investment to Boost Growth:  In September 2022, the U.S. Department of Energy (DOE) announced an investment plan worth $7 billion to fund regional clean hydrogen hubs (H2Hubs) across the nation. Along with this funding announcement, DOE also released a draft of the National Clean Hydrogen Strategy and Roadmap, which provides a snapshot of hydrogen production, transport, storage, and use in the United States currently and the opportunity that clean hydrogen could provide in contributing to national goals across multiple sectors. This was a historical declaration compared to the amounts earlier made available for investment in hydrogen by the U.S. government. Such a huge investment and a progressive development plan are expected to play the role of a major catalyst in President Biden’s strategy to achieve a carbon-free grid by 2035 and net-zero emissions by 2050.

Growing Trade Rift With EU May Hurt U.S. Renewable Industry: Of late, major rifts have emerged between Washington and its European allies, particularly following the declaration of the Inflation Reduction Act (IRA). This is because the IRA includes tax credits for U.S. buyers of electric vehicles—but only if the vehicles are assembled in North America and their components are made in the United States or in territories of select “free-trade partners.” This is likely to hurt European car companies such as Volkswagen and BMW. The brewing trade hostility between these two bigwigs is further evident from Thierry Breton, the European Union’s internal market commissioner’s November announcement of pulling out of the meetings in Maryland of the U.S.-EU Trade and Technology Council, a key coordinating body for trans-Atlantic economic policy. He said the agenda “no longer gives sufficient space to issues of concern to many European industry ministers and businesses,” pointing to EU complaints over new U.S. subsidies for electric vehicles and clean energy that disadvantage European carmakers and other companies. Such trade disputes might not bode well for the U.S. alternative energy industry in the coming days.

The Zacks Alternative Energy industry is housed within the broader Zacks Oils-Energy sector. It carries a Zacks Industry Rank #158, which places it in the bottom 37% of more than 250 Zacks industries.

The industry’s position in the bottom 50% of the Zacks-ranked industries is due to a negative earnings outlook for the constituent companies in aggregate. Looking at the aggregate earnings estimate revisions, it appears that analysts have lost confidence in this group’s earnings growth potential over the past few months. The industry’s earnings estimate for the current fiscal year has gone down 9.4% to $1.73 since Sep 30. 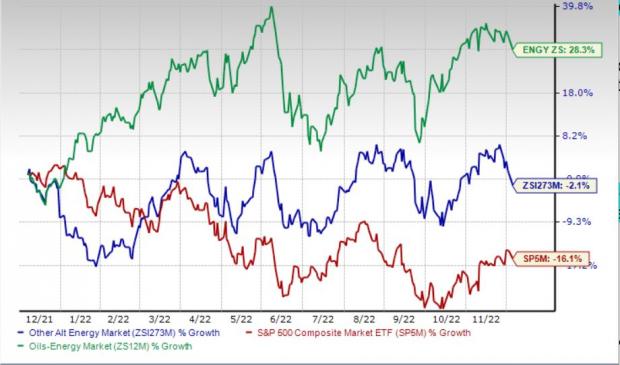 On the basis of the trailing 12-month EV/EBITDA ratio, which is commonly used for valuing alternative energy stocks, the industry is currently trading at 9.26 compared with the S&P 500’s 12.14 and the sector’s 3.25.

HF Sinclair: Based in Dallas, TX, this company is an energy company, which produces and markets light products such as gasoline, diesel fuel, jet fuel, renewable diesel and other specialty products. In November 2022, HF Sinclair announced its third-quarter 2022 results. Since the closing of the Sinclair acquisition on Mar 14, 2022, the company has returned over $1.1 billion, which is well ahead of its initial target of returning $1 billion to its shareholders by the end of the first quarter of 2023.

The Zacks Consensus Estimate for HF Sinclair’s 2022 sales implies an improvement of 102.3% from the 2021 reported figure. The company delivered an average earnings surprise of 695.82% in the last four quarters. DINO currently sports a Zacks Rank #1 (Strong Buy). 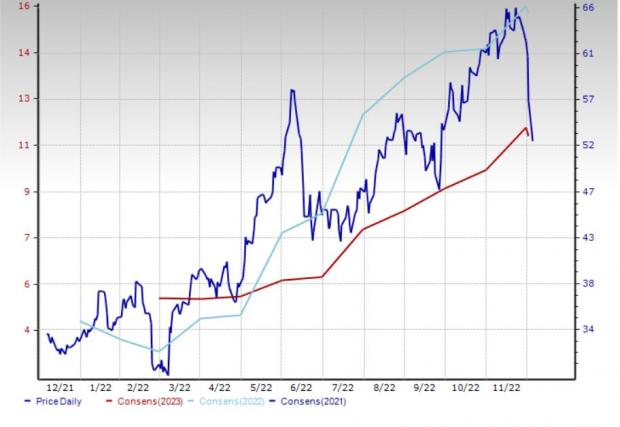 Texas Pacific Land: Based in Dallas, TX, Texas Pacific Land TPL is one of the largest landowners in the State of Texas operating under two business segments: Land and Resource Management and Water Services and Operations. In November, it announced its third-quarter results. The company reported a net income of $129.8 million for the third quarter of 2022, reflecting an increase of 54.9% from a net income of $83.8 million in the third quarter of 2021. 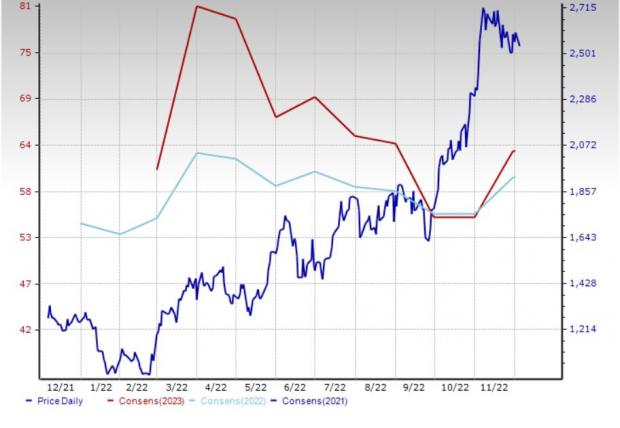 Clearway Energy.: Based in San Francisco, CA, Clearway Energy owns, operates and acquires renewable and conventional generation and thermal infrastructure projects. In August 2022, the company reported its second-quarter 2022 results. During the second quarter, GEVO sold 9 thousand gallons of SAF, isooctane, and isooctene from its Luverne Facility.

The Zacks Consensus Estimate for CWEN’s 2022 earnings implies an improvement of 400% from 2021’s reported sales figure. The company delivered an earnings surprise of 115.38% in the last reported quarter. CWEN currently has a Zacks Rank #2. You can see the complete list of today’s Zacks #1 Rank stocks here. 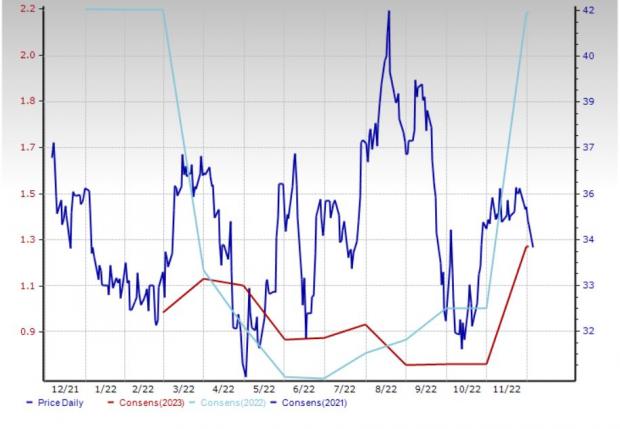