Read MoreHide Full Article
Penumbra (PEN - Free Report) is a $5.9 billion medical device company focused on minimally-invasive instruments for neurovascular and peripheral vascular diseases.
The company leverages its expertise in catheter-based technology to develop access devices for treating strokes, aneurysms, deep vein thrombosis, pulmonary embolism, and other patient events caused by blood clots.
Penumbra takes its name from the shadow-like effect in pathology and anatomy where the area surrounding an ischemic event such as thrombotic or embolic stroke can become dark. Immediately following the event, blood flow and therefore oxygen transport is reduced locally, leading to hypoxia of the cells near the location of the original insult.
Penumbra technologies use proprietary aspiration catheters, tubes and other instruments to essentially vacuum blood clots out of the brain, in the case of stroke.
Based in Alameda, CA, Penumbra sells its products to hospitals and clinics primarily through its direct sales organization in the United States, most of Europe, Canada and Australia, and through distributors in select international markets.
I last wrote about PEN as the Bull of the Day in May after another stellar earnings report launched shares out of the April-May doldrums near $125. Making new all-time highs this week above $170, I thought it would be good to revisit the story ahead of their second-quarter report in early August.
Strong Q1 Results Affirm the Growth Story
On May 7, Penumbra delivered a 77% earnings beat for Q1 2019 with non-GAAP EPS of $0.23 per share vs. the Zacks Consensus Estimate of $0.13 per share. This compares to earnings of $0.06 per share a year ago.
The company also beat on the topline with Q1 revenue of $128.4 million vs. the consensus of $123 million. This represented a year-over-year increase of 25.1%, or 27.2% on a constant currency basis.
Revenues were split 64% for the US and 36% international for the quarter. Neuro products sales grew to $81.5 million, an increase of 14.1%, or 16.5% on a constant currency basis from the year ago quarter.
Vascular products sales grew to $47.0 million, an increase of 50.2%, or 51.8% on a constant currency basis.
Gross profit was $83.9 million, or 65.3% of total revenue, compared to $66.6 million, or 64.8% of total revenue, for Q1 2018.
Total operating expenses were $72.8 million, or 56.6% of total revenue. This compares to total operating expenses of $62.5 million, or 60.9% of total revenue, for Q1 2018.
PEN management also guided to the high end of their revenue range of $525 to $535 million for 2019.
Here's a look at Penumbra's sales growth for the past 3 full years since the company's 2015 IPO... 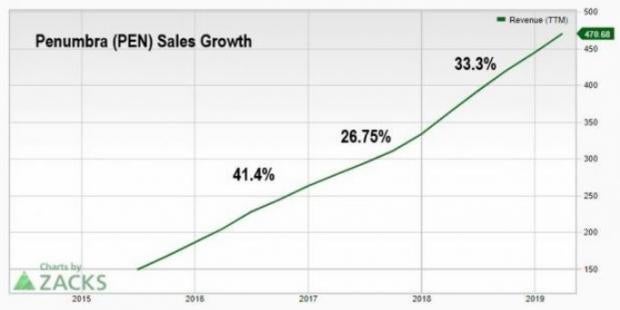 And here's what I wrote about PEN last September after the stock came off of new highs near $160...
Growth Catches Up with the Valuation
The company made a strong swing to sustainable profitability this year on the back of projected 27.5% sales growth from last year's $333 million to over $425 million in revenue.
The profit surge -- from last year's loss of 1-cent to a current estimate of +$0.34 -- caught analysts way off guard. We know this because in the last two quarters, the company delivered consecutive 400% EPS beats.
And that's why the stock is a Zacks #1 Rank as analysts scrambled to raise full-year 2018 EPS estimates 70%, since the early August quarterly report, from $0.20 to $0.34.
Additionally, 2019 top-line estimates are currently looking for over 20% growth to a record $500 million, giving Penumbra a 10X price-to-sales ratio.
This sales advance is expected to translate to the bottom line next year with 72% EPS growth to $0.59. At $150 per share, that would put the forward P/E multiple under 300X.
That's still rich, but characteristic of med-tech companies with key patents and strong sales growth.
(end of excerpt from September article)
Valuation Update: Rich Again
Clearly investors saw some degree of value after the strong Q1 report and outlook when shares were trading for only 7X Sales and 100X EPS. But now with the big 35% rally in the past two months, they are back to being rich at 10X forward sales (revenues should cross $600 million by this time next year) and 130X EPS.
This makes me wonder if my M&A ideas for PEN are coming to the surface again. We'll review those conjectures in a moment. First, let's take a fresh look at the Zacks Detailed Estimates page so you can see the analyst consensus projections for growth this year and next... 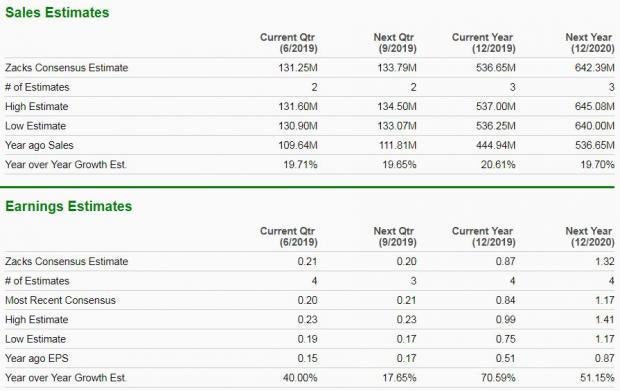 Another excerpt from my September article will shine some light on the bigger players who may be interested in Penumbra's technologies...
Med-Tech in Spotlight After Cardio Conference
Today is the last day of the Transcatheter Cardiovascular Therapeutic conference in San Diego, CA. Monday saw a good bit of positive reaction for other "med-tech" (medical technology) companies like Edwards Lifesciences (EW - Free Report) whose shares surged 7.5% on positive data in their transcatheter mitral heart valve technology, an offshoot of their tremendous success and market leadership in aortic valve replacement using catheters instead of dangerous open-heart surgery.
But that rally to new highs above $165, which began with a new weekly closing high Friday above $153, got a boost from a Barron's article by Bill Alpert published Monday morning which used a September 16 Wells Fargo research report to suggest that EW could be an M&A target for Johnson & Johnson (JNJ - Free Report) .
Lots of speculation there, but Alpert shared important insights by analyst Larry Biegelsen as med-tech device M&A heats up following last week's fold-in of spinal surgery outfit Mazor Robotics (MZOR) by Medtronic (MDT - Free Report) , which already owned about 20% of the company, for $1.64 billion:
"Mergers among device makers will also probably continue. Lately, [Biegelsen] writes, J&J Chief Executive Alex Gorsky has called out the increasing innovation and friendlier regulation of devices, compared with some other products."
In the afternoon, Allison Gatlin writing for Investors Business Daily made this astute observation: "Also helping Edwards on Monday, Abbott (ABT - Free Report) announced positive results from a study of its MitraClip device in patients with leaky heart valves. The study showed that using the MitraClip plus traditional medical therapy in these patients is superior to medical therapy alone."
What About Penumbra?
I went through all this M&A action and reaction in med-tech for a good reason. If you have trouble wrapping your head around PEN's P/E of 130X (next year's $1.32 EPS into $172/share), then you have to focus on the growth rates, the TAM (total addressable market), and the M&A competition.
You may not want to pay 130X, but plenty of large growth investors will when they look at these dynamics.
The Wells Fargo analyst Larry Biegelsen cited in the Barron's article about EW and BAX has also been the lone voice with the highest "aspirations" for Penumbra, with a $180 PT. (As of June, he was joined by the MedTech analyst team at BofA/ML who now also have a $180 PT on PEN.)
On August 9, Biegelsen put out a note title "JET-ENGINE Ready for Take-Off!" as he described the company's new technologies for aspiration procedures in treating stroke, where a deep vacuum suction is sometimes used to aspirate the clot...
"While new competitors have entered the aspiration market this year with approved devices, we believe that PEN will continue to lead the field with its innovative technology with the new ENGINE pump that launched recently and the JET catheter that is pending FDA approval."
Then on August 17, the FDA cleared PEN’s Jet 7 aspiration catheter for stroke.
Following earnings last week, the Wells Fargo analyst reiterated his $180 PT and noted, "While competition in the aspiration stroke market has increased, we believe that PEN has and will continue to stay ahead of the curve. We expect new product launches, including upgrades to the JET/ENGINE aspiration system" as well as other innovations that will highlight PEN’s growing revenue diversification and growth potential beyond 2019.
Innovation Update: New FDA Approval
On June 16, the FDA approved a new stroke device for PEN, signaling the possible start of a series of new stroke products. This approval posted on the FDA website is for the Penumbra System Reperfusion Catheter Jet 7, but there was no corresponding press release from the company.
During the Q1 conference call in May, PEN management highlighted that new stroke technologies coming this year and next will be important individually, and in the aggregate they have the potential to reshape stroke treatment. Investors probably won't have to wait until the company's Q2 report in August to learn more as the Society of Neuro-Interventional Surgery meeting happens July 22-­25 in Miami Beach.
The PEN is Mightier Than the Scalpel
If I learned one thing from my long-term investing in med-tech companies like Edwards Lifesciences (we originally bought EW in 2017 under $100) it's that technology innovation with catheter-based solutions creates less-invasive emergency surgical procedures that save lives without putting patients at greater risk.
In the case of EW, the ability for a heart specialist to install a new valve in an older patient who would be too high-risk for open-heart surgery has been a tremendous godsend for many thousands of heart patients and their families.
With Penumbra's innovations in neuro procedures, including differentiated solutions for access, stroke revascularization, and embolization for use in the neurovasculature, they are offering brain specialists new avenues for treating and saving patients with severe neuro-vascular events.
And the innovation pathways for PEN are expanding in other exciting ways too. On September 4, the company closed on the $20 million acquisition of a controlling interest in its joint venture, MVI Health, which was created to be a leader in virtual reality software and tracking solutions for healthcare applications.
The possibilities of advanced surgical and catheter-based procedures using virtual and augmented reality must have even the robot surgeons jazzed!
Disclosure: I own shares of PEN, JNJ and EW for the Zacks Healthcare Innovators portfolio.
More Stock News: This Is Bigger than the iPhone!
It could become the mother of all technological revolutions. Apple sold a mere 1 billion iPhones in 10 years but a new breakthrough is expected to generate more than 27 billion devices in just 3 years, creating a $1.7 trillion market.
Zacks has just released a Special Report that spotlights this fast-emerging phenomenon and 6 tickers for taking advantage of it. If you don't buy now, you may kick yourself in 2020.
Click here for the 6 trades >> 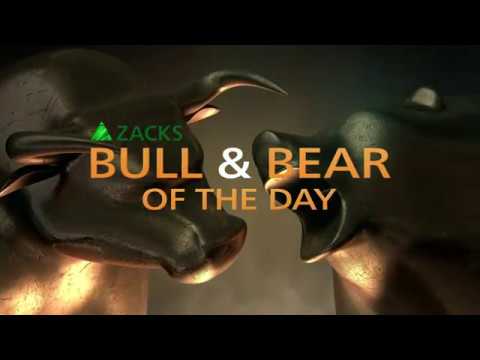