Hasbro, Inc. (HAS - Free Report) stock has crushed its industry and the S&P 500 in 2019. The toy and entertainment company, which sells brands such as Monopoly and Nerf, also announced a deal recently that looks poised to expand its reach in the streaming TV era. Plus, new estimates call for a strong holiday shopping season.

The National Retail Federation said last Thursday that it expects U.S. holiday shopping sales to climb between 3.8% and 4.2% to reach roughly $730 billion. This would crush last year’s underwhelming 2.1% holiday shopping season expansion that came in far below projections.

The NRF’s projection comes as U.S. unemployment rests at 50-year lows. This could also help calm growing Wall Street nerves that the ongoing trade war between the world’s two largest economies and a slowing global picture is set to hit U.S. consumers. 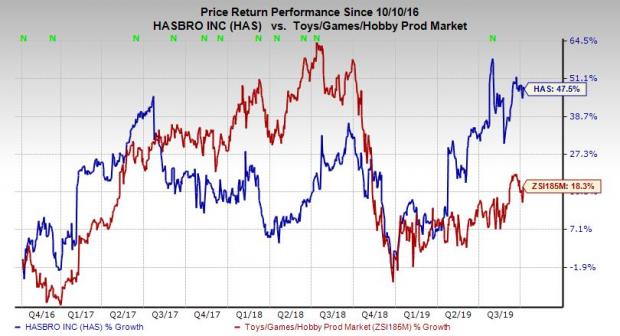 Hasbro’s brand portfolio includesPlay-Doh, Transformers, Monopoly, the rights to make Star Wars and Marvel toys, and much more. The company’s Magic: The Gathering franchise posted an impressive second quarter as it continues to grow. Investors should note that game, which has been around for 25 years, will soon be brought to life for the first time in a Netflix (NFLX - Free Report) animated series.

More importantly, Hasbro announced on August 22 that it entered into a definitive agreement to purchase Entertainment One for $4 billion. The firm is behind popular children's animated shows Peppa Pig and PJ Masks, along with a slew of other TV shows and movies for adults. The deal could help Hasbro expand into more digital content that could become an integral part of its business for years to come in a streaming TV age that will soon see Apple (AAPL - Free Report) , Amazon (AMZN - Free Report) , and Netflix all in need of more content to challenge Disney’s (DIS - Free Report) expansive library of shows and movies for kids.

The Pawtucket, Rhode Island-based firm’s move should help it diversify amid a changing landscape. This could eventually include interactive augmented reality experiences and more. “By combining two profitable and financially disciplined companies we expect to unlock value in the short- and long-term for our stakeholders,” Hasbro CFO Deborah Thomas said in a statement.

“eOne’s brands and TV and film expertise, together with Hasbro’s brands, toy and game innovation and licensing capabilities, positions us to more quickly drive revenue and profit over the medium-term.”

As we mentioned at the top, HAS stock has gone on a solid run in 2019, up 45% against the S&P 500’s roughly 17% jump and its industry’s 19%. Shares of Hasbro have also climbed 17% during the last 52 weeks, while its industry slipped 19%. Plus, the firm has crushed its industry, which includes rival Mattel (MAT - Free Report) , along with video game powers Electronic Arts (EA - Free Report) and Take-Two Interactive (TWO - Free Report) , over the last three years as we can see in the chart above—driven by Mattel’s 63% downturn.

Hasbro’s recent success has stretched its valuation picture slightly, with HAS trading at 22.5X forward 12-month Zacks Earnings Estimates. Yet, this figure still marks a discount against its industry’s 26.5X average and its own three-year high of 25.2X. In terms of forward price/sales, HAS stock appears even stronger against its industry, 2.9X vs. 4.9X.

Hasbro is scheduled to release its Q3 financial results on Tuesday, October 22. The firm’s third-quarter fiscal 2019 revenue is projected to surge 9.7% to reach $1.72 billion, based on our current Zacks Consensus Estimates. This figure would top Q2’s 9% top-line expansion.

The toy maker’s fourth-quarter sales are then projected to surge 12.3% to help lift total fiscal 2019 revenue by 9% to $4.99 billion. Peeking a bit further down the line, Hasbro’s full-year 2020 sales are expected to come in 4.6% above our current-year projection to reach $5.22 billion.

Moving on, HAS is projected to post adjusted quarterly earnings of $2.22 per share, which would mark a 15% climb from the year-ago quarter. Investors should note that Hasbro’s adjusted earnings soared 65% and hit $0.78 per share last quarter, which destroyed our $0.51 a share projection.

Hasbro has seen its longer-term earnings estimate revisions trend upward recently, along with positive movement for Q3, which helps the firm earn a Zacks Rank #1 (Strong Buy). The company has also taken steps to try to offset any U.S.-China trade war worries.

The toy and game powerhouse looks ready to bolster its business through a larger push into TV, movies, and digital entrainment. Hasbro stock also could continue to climb during the holiday shopping period, which could see it earn a boost from toys that accompany the release of Disney’s Frozen 2 and Star Wars: The Rise of Skywalker.