With results from almost 15% of S&P 500 members already out, we have a fairly representative sample to judge the Q3 earnings season. The market appears to like the results, with the average index member up almost twice as much in response to its Q3 earnings report relative to the preceding period. This begs the question whether results really are that good?

In absolute terms, Q3 results are at best average, if not below average. The market cares about absolute values, but it cares even more about relative value values. What we mean by ‘relative values’ in the earnings context is how these results compare to expectations. These expectations are captured in consensus estimates for earnings, revenues and other performance metrics, but some aspects of these expectations are hard to quantify and show up mostly in sentiment.

Ahead of the start of the Q3 earnings season, estimates for the period had come down, though the magnitude of negative revisions was about in-line with other recent periods. Growth was essentially flat in the first half of the year and Q3 was not expected to be materially different from that trend line (though earnings were and still are expected to be down from the same period last year).

Beyond these lowered Q3 estimates, many in the market appeared to fear a notable uptick in negative guidance for Q4 and beyond, in the wake of renewed signs of deceleration in the global and U.S. economy.

Actual results from the 74 S&P 500 members that have reported Q3 results through Friday, October 18th, have been better relative to these lowered estimates. Importantly, the unstated fears of the earnings outlook for the current and coming quarters taking a hit, particularly for the economically sensitive sectors, have failed to bear out.

The market’s enthusiastic reaction to reports from the likes of Fastenal (FAST - Free Report) , United Rentals (URI - Free Report) , Kansas City Southern , Dover (DOV - Free Report) and a number of the banks likely reflects this ‘better than feared’ aspect of the results.

We now have Q3 results from 74 S&P 500 members that combined account for 19.9% of the index’s total market capitalization. Total earnings (aggregate net income) these 74 companies are down -3% from the same period last year on +3.2% higher revenues, with 83.8% beating EPS estimates and 59.5% beating revenue estimates.

It is hard to get overly excited about this growth pace. But as we mentioned earlier, the market is appreciating what these results show relative to expectations, which can you see in the set of charts below.

As is typically the case every quarter, the Finance sector has the most results at this stage of the reporting cycle. We have already seen Q3 results from 46.7% of the sector’s market cap in the S&P 500 index. Total earnings or aggregate net income for these Finance sector companies are down -1.6% from the same period last year on +3.2% higher revenues, with 85.2% beating EPS estimates and 70.4% beating revenue estimates.

The proportion of these Finance sector companies beating estimates is towards the high end of recent historical ranges, as the comparison charts below show.

Q3 Expectations as a Whole

Looking at Q3 as a whole, combining the actual results from the 74 index members with estimates for the still-to-come companies, total earnings (or aggregate net income) is expected to be down -4% from the same period last year on +4.1% higher revenues. The table provides a summary view of Q3 expectations contrasted with actual results for the preceding period. 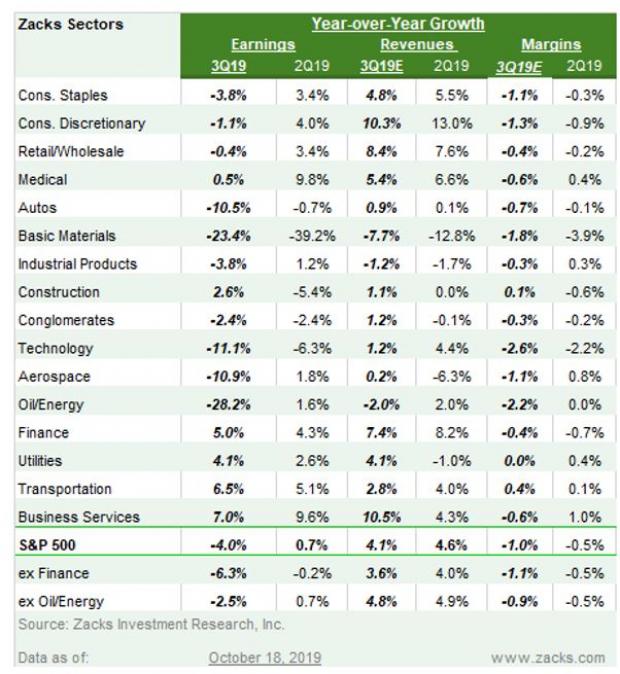 Tough comparisons to last year when growth was boosted by the tax cut legislation were all along expected to weigh on earnings growth in 2019. Moderating U.S. economic growth and notable slowdowns in other major global economic regions are having a further negative impact. Uncertainty about the global trade regime and a growing resort to tariffs are not helping matters either.

It is the weak Tech growth that is a major drag on the aggregate Q3 earnings growth rate for the S&P 500 index deeper into negative territory. The Tech sector is the biggest earnings contributor in the S&P 500 index, bringing in 22.9% of the index’s total earnings in forward 4-quarter period. Excluding the Tech sector’s drag, total earnings growth for the remainder of the index would be down only -1.8% (-4% with Tech included).

Driving the Tech sector’s weak earnings growth expectation for the quarter is Apple (AAPL - Free Report) , Alphabet (GOOGL - Free Report) and few other major players and continued tough times for the broader semiconductor space. For Apple, September quarter earnings are expected to be down -9.4% on -0.9% lower revenues. 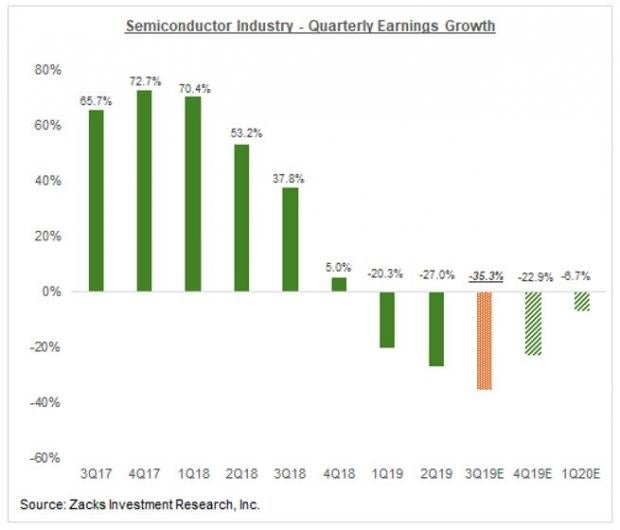 Had it not been for the chip industry drag, the sector’s Q3 earnings decline would be about half; -5.4% vs. -11.1%. The expectation is that the year-over-year declines bottom in Q3 and start improving from next quarter onwards, which is expected to help improve the sector’s growth picture, as the chart below shows. 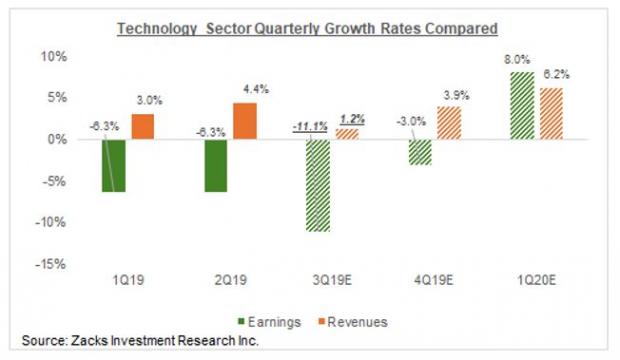 Estimates for the current period (2019 Q4) have started coming down, but not at the pace that many in the market appeared to fear earlier. The chart below shows the evolution of 2019 Q4 earnings growth expectations. 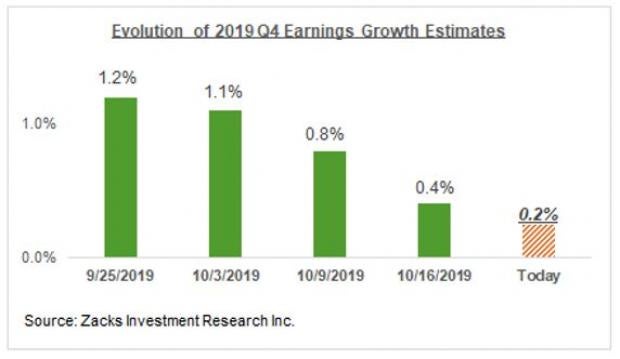 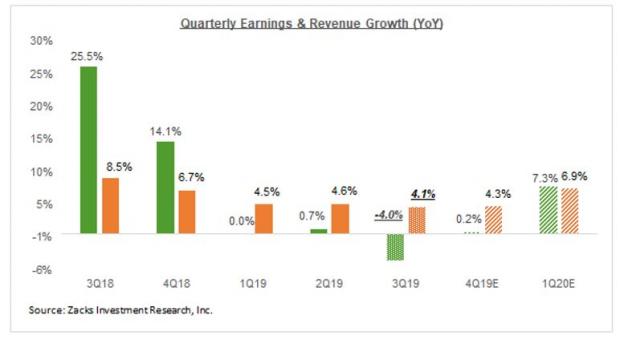 For an in-depth look at the overall earnings picture and expectations for Q3 and beyond, please check out our weekly Earnings Trends report >>> Solid Start to Q3 Earnings Season