The Golden Age Of Investing

The markets are evolving with technology, and so is investing and trading. The trading floors at the New York Stock Exchange and The Chicago Mercantile exchange are no longer overrun with zealous traders screaming their lungs in open outcry trading. Technology today has made the need for wailing traders and stockbrokers all but obsolete.

Wall Street In The 70s

Transaction volume snowballed at the end of the 60s as the stock market taboo caused by the great depression finally began to lift.

Before the 70s, every trade was held as a paper certificate, and trades were made by exchanging these physical certificates. Imagine how slow and tedious trade execution would be in an era without electronics.

The volumes in the late 60s become unmanageable for the brokers, with paperwork piling up to the ceiling. The execution time for a trade was egregiously slow. A central system to consolidate the record-keeping was needed.

The 70s marked the introduction of technology into the stock market. In 1973 the Depository Trust Company was created to reduce the number of physical stock certificates being circulated and significantly reduced paperwork.

The system allowed stocks to be held electronically, making it the financial markets first step to digitalization.

1975 was a landmark year for the stock market. It marked the end of NYSE’s “Rule 394”, which required trades to be made only on the trading floor. This would open the door for online trading in the years to come.

This year also marked the elimination of the fixed 2% commissions that SEC had previously required, opening the door for discount brokers like Charles Schwab (SCHW - Free Report) and TD Ameritrade (AMTD - Free Report) . This made stocks cheaper to own and more available to the broader public. There was a surge in stock market participation, with 25% more retail investors entering the space in the 5 years following the ruling.

The cost to buy and sell shares had lowered, but the volume had grown substantially, with an increasing number of individuals eager to risk their money in the equity markets.

Wall Street In The 80s

The 80s were a time of economic expansion and prosperity. Ronald Reagan’s promotion of business and capitalism underlined his years in office (1981 -1989). The US economy was bolstered in this era through what was coined as Reaganomics: cutting income taxes, deregulating industries, and promoting free-market policies.

The 1980s demonstrated some of the US’s most robust GDP growth to date with Reaganomics as the brace. The highlighted portion of the St. Louis Fed’s (FRED) GDP graph below illustrates the robust expansion. 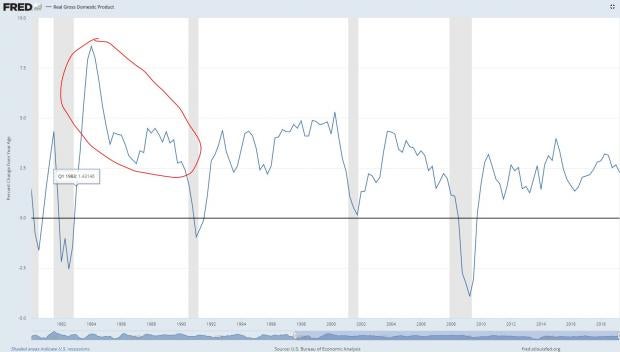 The deregulations beginning in the 70s set the financial markets up for a boom. A substantial increase in volumes, combined with the abundant economic growth, made Wall Street and trading floors across America gold mines. The trading floors were overflowing with young, eager, and money crazed traders who could smell money in the air.

Trading floors in the 80s were equal parts of testosterone, ambition, and greed. Execution time remained slow, and paper was still flying around the floors, allowing for arbitrage opportunities that created easy pickings for savvy traders.

Programmed electronic trades ostensibly caused the flash crash in 1987 that is coined today as "Black Monday." These automated trades were programmed to find arbitrage in the markets between the stock market (cash market) and the futures market.

The programs were obviously flawed, and a small futures fluctuation turned into a mass sell-off as the antiquated algos blindly sold off hard. This was likely a failsafe in the programs to prevent more substantial losses.

Algorithmic trading (algo trading) models today are far more sophisticated, having learned from the mistakes of the past.

The next couple decades saw leaps and bound of improvement in electronic trading. Today, over 70% of market volume is derived from algo trading. This is a type of trading that is written entirely in code and executes trades autonomously if a market security hits specific perimeters. Traditional day traders are a dying breed as the light speed algos snatch up opportunities before a human can comprehend what had happened.

Personal investing has also seen significant advancements. As personal computers became a norm in the 90s, brokerage saw an opportunity. In 1991, E*TRADE (ETFC - Free Report) opened its virtual doors, allowing retail investors to trade right from their home computer without picking up the phone. This was revolutionary and further increased market participation.

Online trading/investing has become a norm in our society, and traditional stockbrokers are no longer an essential intermediary.

The rise of Robinhood and its commission-free trades further shook the online brokerage markets. Robinhood is a mobile app meant to cater to the younger generation, but has since broadened its scope and now services over 6 million users.

This commission-free trading platform significantly disrupted the online brokerage space, taking market share from industry leaders. In the past month, all major online brokerages announced they would be eliminating all commission fees in order to remain competitive in the increasingly contentious space.

The golden age of investing may be upon us, with the ease of retail investing at an all-time high, combined with the longest bull market in US history. Stock market participation rates have been growing and I expect this trend to continue as the technological innovation further simplifies investing.

Now is the time to be putting your cash into the golden age of investing. With instantaneous, commission-free trading at your fingertips, there is no reason to withhold your money from working for you. All you need is a consistent stock/ETF picking strategy that’s in line with your investing goals.

Zacks Rank can help you sort the studs from the duds. This quantitative model ranks stocks based on future profitability.

Zacks’ model has been proven to outpace the market for over 3 decades. Zacks Ranking system, combined with the guidance of Zacks’ analysts, could provide you with the tools you need to get your hands dirty in the financial markets.