On Nov 1, Newell reported its third quarter results and beat the Zacks Consensus by 17 cents. Earnings were $0.73 versus the consensus of $0.56.

It was the 9th consecutive quarterly earnings beat.

The company has been in a turnaround mode and has a new CEO who spent the first 30 days on the job visiting all 7 businesses, the e-Commerce Group and the Design Center.

Despite the turnaround plan, net sales still declined 3.8% year-over-year to $2.5 billion. Core sales were down 2.5% but did see an increase in 4 of the 7 operating divisions.

The Home & Outdoor Living segment saw net sales of $723 million, down from $727 million a year ago. Core sales growth of 1.3% was offset by unfavorable foreign exchange and the exit of 72 underperforming Yankee Candle retail stores in the first nine months of 2019.

The Learning & Development saw net sales of $824 million versus $829 million a year ago with core sales growth of 0.5% offest by the headwind from foreign exchange. Core sales did increase, however, at both the Baby and Writing divisions within the segment.

The Appliances & Cookware segment saw net sales of $430 million, down from $454 million in the third quarter of 2018, due to the impact of the unfavorable foreign exchange as well as a core sales decrease of 3.7%.

The Food & Commercial segment also saw a year-over-year decline in net sales of $473 million, down from $539 million. Core sales fell 11.3% and there was a headwind from foreign exchange.

Changes to the Portfolio

The company has been divesting itself of some of its underperforming businesses during its turnaround but it announced it would end its divestiture program and still retain the Mapa/Spontex and Quickie businesses that had already been classified as discontinued operations.

Therefore, beginning in the fourth quarter, the businesses will be reflected in continuing operations.

It's expected to be accretive to net sales, operating margins, EPS and operating cash flow in 2020.

With some improvement in its business and the addition of the businesses back into continuing operations, the company has raised its full year EPS and sales guidance.

Not surprisingly, given the company's outlook, analysts all moved to raise the earnings estimates for 2019.

Analysts are also bullish on 2020 as 6 estimates were revised higher in the last week as well. The Zacks Consensus Estimate jumped to $1.60 from $1.50 in that time. That's a 4.6% decline year-over-year, however.

Shares Spike on the Earnings Report

Newell shares have been on a downward spiral the last 2 years, falling 29.8% during that time.

However, the earnings report appears to have put a bottom under the shares as they are actually up 7.4% year-to-date.

They're still cheap, with a forward P/E of just 12.

The company is also shareholder friendly and pays a dividend currently yielding 4.6%.

For investors looking for a cheap turnaround story with rising earnings estimates, Newell Brands is one to keep on your list. 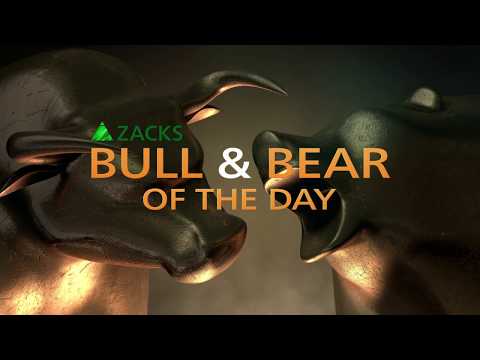