Shares of Fiat Chrysler Automobiles N.V. FCAU have fallen 35% in the past two years and its planned merger with Peugeot maker Groupe PSA PUGOY still awaits regulatory approval. The auto giant’s sales have also slumped over the trailing 12 months and earnings are projected to slip as the auto industry races to spend on the next generation of technology.

Fiat Chrysler and PSA officially announced their finalized merger terms on December 18. The deal would create the world’s third-largest auto maker and house Jeep, Ram, Fiat, Peugeot, and more. The merger is designed to help the joint firm better compete globally and adapt to an industry, from Ford F to Tesla (TSLA - Free Report) , that has started to invest heavily in electric and autonomous driving.

The merger must still be approved in both the U.S. and Europe. Executives from the two automotive giants expect the process to take between 12 and 15 months.

Along with the lengthy and uncertain process ahead, investors should note that auto sales face challenges in China and elsewhere amid a slowing global economy. For example, GM GM recently posted its biggest-ever sales drop in China last year and warned that 2020 could be rough as well.

Plus, U.S. light-duty vehicle sales slipped 1.6% in 2019, according to Edmunds. Meanwhile, the likes of Uber UBER and other ride-hailing firms have disrupted the industry.

In terms of Fiat Chrysler, the company’s sales have slipped roughly 9% in the trailing 12 months. FCAU stock is also down roughly 10% during this same stretch, which lags its broader industry’s 11% climb and the S&P 500’s 24% jump. 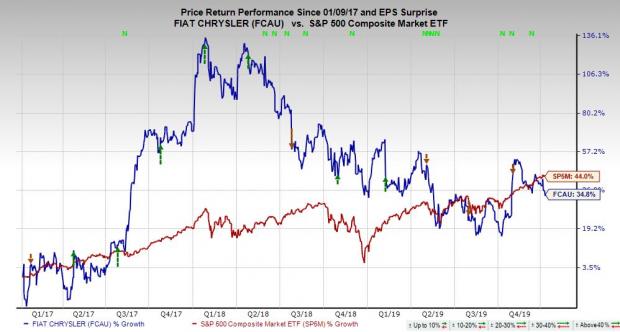 Fiat Chrysler’s valuation is solid at the moment as it trades at a discount against its industry’s average (5.1X vs. 8.7X). However, the stock has traded as low as 4.3X forward 12-month Zacks earnings estimates over the last year.

FCAU’s Automotive – Foreign industry currently rests in the bottom 40% of our more than 250 Zacks industries. FCAU stock is also trading below its 50-day moving average. Plus, our estimates call for the firm’s full-year earnings to fall nearly 23% this year and another 5.2% next year.

Fiat Chrysler is currently a Zacks Rank #5 (Strong Sell) based on its recent negative earnings revision trends. With that said, interested investors might want to keep an eye on the firm as it tries to complete its PSA merger.