Investors don’t tend to look for value in a market that’s consistently making new highs. This is the time for exciting momentum names, not good old dependable stocks that set your mind at ease.

But what if you could have both? What if you could find value stocks that are also rising along with the market? You can! There’s a screen called “Value Stocks at 52-Week Highs” that can help you find the best of both of those worlds.

Specifically, it looks for Zacks Rank #1s or #2s (Strong Buys and Buys, respectively) along with a Zacks Value Score of “A”. It also wants price as a percentage of the 52-week high-low range to be greater than or equal to 95.

Here are three names that recently passed the test for this screen:

Best Buy Co. (BBY) is one of those “exceptions” in retail. You know, a mostly brick-and-mortar company that managed to survive in ‘the world according to Amazon’.

However, it’s doing much more than just getting by. BBY is prospering. The stock has jumped more than 62% over the past year and is the only name from the Retail – Consumer Electronics industry with a Zacks Rank #2 (Buy).

If you’re willing to drop $2500 on a 75” TV even though your current 65” one works just fine, you’re going to want to see it in person before committing. And that’s when Best Buy has you.

Because you’re certainly going to want a new sound system to go with that TV. It’s right over there! And since you’ve already spent all this money, what’s another $400 for one of those Apple Watches you’ve been thinking about? Or maybe a Nintendo Switch? Or both!

BBY has beaten the Zacks Consensus Estimate for eight straight quarters now. Most recently, it reported fiscal third quarter earnings of $1.13, which topped our estimates by nearly 8.7% and jumped 21.5% from last year.

The top line also beat our expectations and improved 1.7% year over year to nearly $9.8 billion.

The quarter was good enough for BBY to lift its outlook for fiscal 2020. It now expects enterprise revenue between $43.2 billion and $43.6 billion, which is up slightly from the previous range of $43.1 billion to $43.6 billion.

Looking even further in the future, BBY expects enterprise revenue of about $50 billion by 2025, thanks in large part to its Best Buy Health and an ongoing supply chain transformation as it embarks on its “Building the New Blue: Chapter Two” strategy.

Analysts picked up on the company’s confidence for the future. The Zacks Consensus Estimate for the year ending this month has climbed 3.3% in the past 60 days to $5.94.

BBY will report again on February 26. 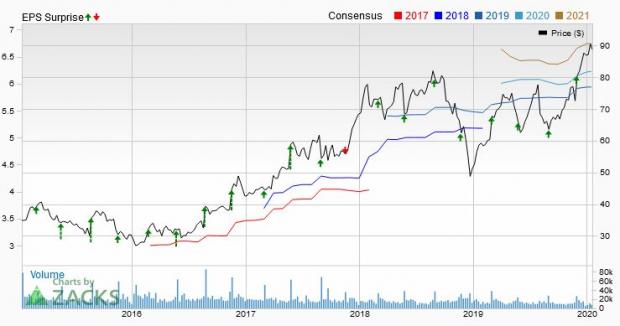 Buying a single homebuilder to capitalize on that strong industry is like putting all your drill bits in one pocket.

You never know what company-specific or region-specific factor could spring up and limit your profit potential. So if you’re not absolutely positively certain your favorite homebuilder is the best way to take advantage, then you may want to go in a more general direction like Builders FirstSource (BLDR).

The company is a leading supplier of building products, prefabricated components and value-added services for new residential construction, repair and remodeling.

It’s part of the Building Products – Retail space, which is in the top 19% of the Zacks Industry Rank with a one-year return of nearly 27%. BLDR is the only Zacks Rank #1 (Strong Buy) from that industry.

The stock easily outperformed its highly-ranked industry by soaring more than 100% over the past year. It has also beaten the Zacks Consensus Estimate in 12 of the past 13 quarters.

For its third quarter, earnings per share of 72 cents beat the Zacks Consensus Estimate by 20%. That was the fifth straight quarter that topped our expectations. The average surprise over the past four quarters is over 28%.

Revenue was more than 6% better than the Zacks Consensus Estimate at $1.98 billion.

Over the past three months, earnings estimates have been on the rise. The Zacks Consensus Estimate for the year ended last month has jumped 11.5% in that time to $2.04.

For the year ending December 2020, analysts revised their estimates higher by 10.7% over the past three months to $2.18. This suggests year-over-year improvement of about 7%.

BLDR will report again on February 20. 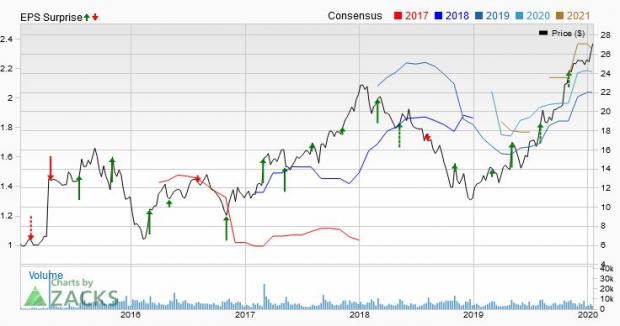 You may not know what photomasks are, but you’re well aware of what they do. They are high precision quartz plates that contain microscopic images of electronic circuits… and they’re a key element in the manufacture of semiconductors and flat panel displays.

In fact, it’s such a big deal that it is its own industry, the Semiconductor Equipment – Photomasks space. And it’s in the top 1% of the Zacks Industry Rank.

One of the big names in this space is Photronics (PLAB - Free Report) , which jumped more than 47% over the past year and has met or beaten the Zacks Consensus Estimate for 10 straight quarters now.

Last month, PLAB reported fiscal fourth quarter earnings of 15 cents, which matched our estimates. Over the past four quarters, the company has an average surprise of more than 36%.

Revenue of $156.3 million topped the Zacks Consensus Estimate by more than 6% and marked the third beat in the past four quarters.

The result was also 8% better than last year and 13% more than the previous quarter. PLAB also mentioned that fourth-quarter revenue has now advanced year-over-year for nine consecutive quarters.

For its fiscal first quarter, the company expects revenue between $146 million and $154 million with earnings per share of 13 cents to 18 cents.

Earnings estimates improved significantly over the past 60 days. The Zacks Consensus Estimate for this fiscal year (ending October 2020) has jumped 23% in that time to 91 cents.

Analysts currently expect earnings of $1.07 for next fiscal year (ending October 2021), which has advanced 12.6% from two months ago and suggests year-over-year improvement of 17.6%. 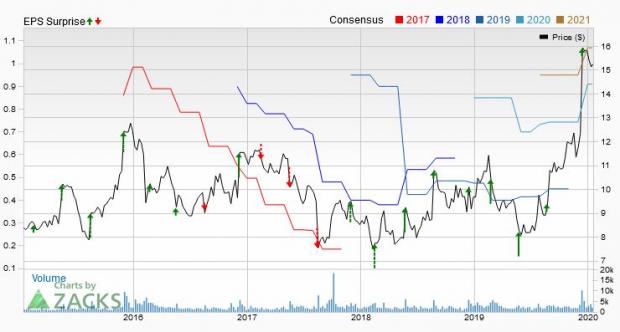 Today you are invited to download our latest Special Report that reveals 5 stocks with the most potential to gain +100% or more in 2020. From those 5, Zacks Director of Research, Sheraz Mian hand-picks one to have the most explosive upside of all. This pioneering tech ticker had soared to all-time highs and then subsided to a price that is irresistible. Now a pending acquisition could super-charge the company’s drive past competitors in the development of true Artificial Intelligence. The earlier you get in to this stock, the greater your potential gain.