Bull Of The Day: GoDaddy (GDDY)

GoDaddy (GDDY - Free Report) has been able to sport double-digit topline growth since it went public in 2015 combined with margin expansion. 2019 was no exception to this, but over the last 52-weeks, these share traded effectively sideways. GoDaddy has been actively buying back its own stock on the notion that it is undervalued, and I am inclined to agree. Following robust Q3 earnings, analysts’ drove up EPS estimates and pushed GDDY into a Zacks Rank #1 (Strong Buy).

The world is digitalizing fast, and attaining an online presence is becoming essential for any business, no matter the size. GoDaddy is a one-stop-shop for small businesses’ online needs, helping with everything from setting up an initial website to implementing a dynamic data-driven ecommerce platform.

GoDaddy has dominated the web hosting industry for 20 years and continues to drive growth. The company has accumulated over 19 million customers in more than 50 different markets, with 8.5 million being international.

This company had a change in management after Scott Wagner was forced to step down for health-related reasons late last year. Aman Bhutani took the helm in September, and analysts are optimistic about his leadership ability. Bhutani was previously the President of Brand Expedia Group, who proved himself as a tremendous leader that is able to deliver operational excellence in a complex global business, according to GoDaddy chairman Charles Robel.

Bhutani’s first significant move on the job was to launch bundled deal Website + Marketing, which replaced the previously known as GoCentral and pushed the number of subscribers to north of 1 million. This bundled package gives entrepreneurs the ability to create an attractive website that they can effectively monetize.

The firm just began turning a profit in 2017 and is expected to aggressively expand its net margins as it dives deeper into profitability.

GoDaddy has been driving robust unlevered free-cash-flow (FCF) over the past 8 quarters, with year-over-year growth not falling below 20%. Below is a graphic from GoDaddy’s Q3 earnings presentation illustrating its FCF expansion. 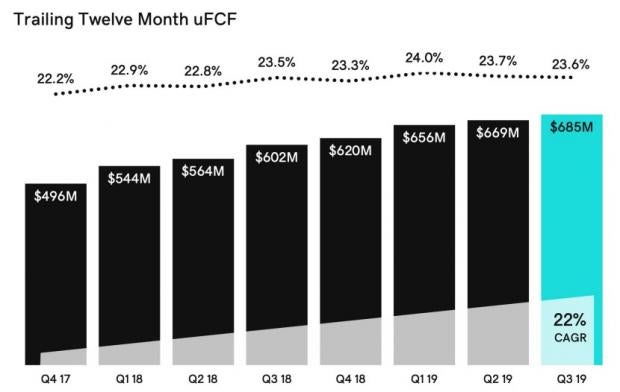 These substantial cash flows combined with the almost a billion in cash give this firm a sizable amount of financial flexibility for investment in its current platform and further acquisitions in this consolidating segment. The continued integration of recent acquisitions like Host Europe Group and Main Street Hub should create progressively stronger synergies.

GoDaddy’s low cost and highly capable platform makes it an easy decision for any starting business, and its international presence still has a lot of room for growth. 8 out of 11 analysts are calling GDDY a buy right now with an average price target representing an over 18% share price appreciation.

This company is reporting Q4 earnings Thursday, February 13th and analysts are estimating an EPS of $0.37 on sales of $2.99 billion, according to Zacks Consensus. This would represent year-over-year growth of 32% and 12%, respectively.

Look for any innovative plans in the earnings call/presentation from CEO Aman Bhutani, who just recently took the helm of GoDaddy. This will be Bhutani’s first full quarter as the head of the company, so his leadership ability will be assessed.