Today’s “Know Your Options” focuses on a difference in terminology that can sometimes be a bit complicated.

You will often hear a reference to a “covered call,” a “buy-write” or a “naked sell” and they’re often confused. Let’s set the record straight.

“Writing” an option is simply a synonym for selling. For each option transaction, there must be two counterparties. One is the purchaser of the option who pays a premium for the right to buy or sell an asset in the future and the other is the seller (or “writer”) who assumes the obligation to buy or sell at the discretion of the buyer and collects an option premium.

This is the simplest of the three to understand. It’s a bearish bet in which the trader simply sells a call to profit if the underlying security declines. Depending on the relationship between the current underlying price and the strike of the call (often referred to as the “moneyness” of the option) the trade can also be profitable if the underlying stays at close to the same price or even appreciates slightly over the life of the option.

This strategy tends not to be very popular with most retail options traders because it involves risk that’s theoretically unlimited. If the underlying rises sharply, the trader is on the hook to sell shares at the strike price, potentially incurring steep losses. Since the maximum possible gain was the premium collected, the trader who sells a naked call is essentially laying very long odds that the original bearish investment thesis is correct.

The typical investor or non-professional trader tends to own stocks or ETFs, but might also want to try to make more income than dividends and share appreciation provide.

That makes selling out of the money options an appealing choice. Investors are used to the idea that they are risking money when they buy stocks, but that the potential loss is limited to the original purchase price. Basically, the absolute worst thing that could happen would be for a stock to go to zero – and even that is exceedingly rare.

Selling an out of the money call on a stock you already own offers the opportunity to collect the options premium, but with limited risk. The risk on the downside is essentially the same as simply having a long position in the shares. In fact, it’s slightly less risky because your cost basis for the shares is reduced by the cash premium collected.

If the shares were to rally sharply and the calls end up in-the money at expiration, the seller would be required to sell shares to the buyer at the strike price, but since the seller already owns them, the total trade results in a net profit. The seller has given up the opportunity to participate in upside gains in excess of the strike price, but the end result is that they have sold shares at a higher price than they were trading when the covered call position was initiated.

It’s not uncommon for traders to sell calls on an ongoing basis against shares that they own. Particularly in the case of a stock that you particularly like - but that has been stuck in the doldrums and doesn’t seem to be rallying – selling calls can be a way to increase the income of the portfolio, and you can do it every month or even every week.

The “buy-write” results in the exact same position as a covered call, but both sides of the trade are executed simultaneously. Traders will say they sold a covered call when they owned the shares first and sold options against them.

They’ll specify “buy-write” to describe a trade in which they buy the shares and sell a call to a single counter-party at the same time.

The vast majority of options trading is now executed electronically, but in the past when most trades occurred via the open-outcry auction process on a physical trading floor like the CBOE, brokers who represented customer orders would request quotes from the market for a buy-write at a single price.

For instance, if someone was willing to sell 100 shares of a given stock at $70 each and simultaneously purchase a 75 strike call for a premium of $2, they would quote the buy-write at the net price of $68.

For the purposes of this explanation, it’s been assumed that the calls that anyone would sell as part of any of these trades are out-of-the-money – having a strike price above the current price of the underlying.

Why couldn’t the calls also be in-the-money?

Technically, they could, but it’s generally not a wise idea because of a combination of the principles of call-put parity and options market mechanics.

Recall that call-put parity states that:

(“Future” being the current price of the stock, plus the cost to carry that position at the prevailing risk-free interest rate, minus any dividends the stock pays.)

The price of a call, minus the price of a put, added to the strike price equals the expected future value of the stock. If that wasn’t true, there would be an opportunity to trade all three assets and lock in a riskless arbitrage profit.

It also means that if you own shares and are short an in-the money call, you have exactly the same position and being short an out-of-the-money put with the same strike. (That might sound counter-intuitive, but I promise it will make sense in a minute.)

We’ll assume that the cost of carrying the stock is offset exactly by expected dividends so that the future price is identical to the current share price. The actual difference tends to be fairly negligible in real-world situations.

You can see that those prices satisfy our call-put parity assumption. 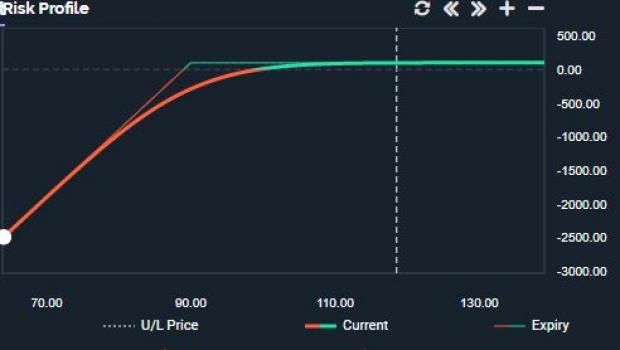 And here’s the payoff diagram of selling one 90 strike put at $1: 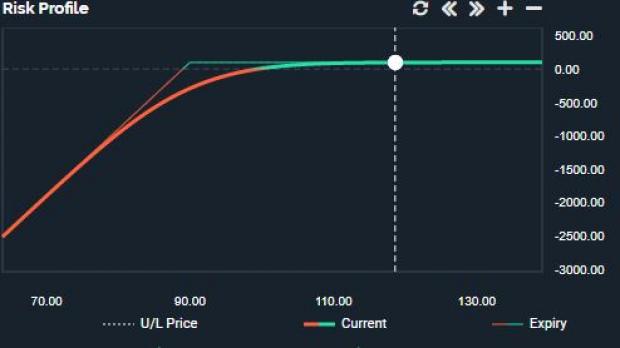 As a trader, you’d be indifferent to which position you had, except for the price you’d pay to initiate those positions.

Let's say the market prices were:

If instead you simply sold the 90 put on the bid, your maximum profit would be the $0.95 you collected and the maximum loss would be $89.05.

The wider bid-ask spread on the call means you’d be taking more risk for less profit potential. I know these don’t seem like hugely significant amounts of money, but no smart trader would ever willingly accept an inferior risk-reward proposition when a more sensible choice was available.

(It’s also possible that you’d be paying more in commission and fees to execute two trades instead of one, depending on the commission schedule at your brokerage and the cost of trading on the exchange.)

These principles are the reason that most buy-write and covered call activity is in at-the-money or out-of-the-money options.

Profitable options trading can be difficult, but it’s definitely not out of reach for the average investor. Knowing the appropriate terminology and also how to avoid paying too much for your positions can help level the playing field and pave the way to better returns.