The market continues to make new highs and we’re in the final days of a better-than-expected earnings season. If it weren’t for the coronavirus, we’d be able to appreciate this great start to 2020 a lot more.

It’s the perfect time to look for stocks displaying both price momentum AND earnings estimate momentum. We have a screen for that and its aptly titled Price & Earnings Estimate Momentum.

Below are three stocks that were recently in this screen, but make sure to look at the full list as it changes daily.

Big wheels keep on turning, carrying the cyclical semiconductor space back into favor for 2020 after a soft 2019.

Lam Research (LRCX) plans to take full advantage of increased wafer spending this year, which management believes will be in the mid-to-high $50 billion range.

The company supplies wafer fabrication equipment and services to the semiconductor industry, which are used in front-end and WLP processes, creating memory, microprocessors, and other logic integrated circuits for a broad range of electronic devices.

The semiconductor equipment – wafer fabrication space is in the Top 2% of the Zacks Industry Rank!

However, regardless of where the industry is in the cycle, LRCX has a habit of beating the Zacks Consensus Estimate. As you can see in the graph below, the stock in on a multi-year streak of outperforming expectations, which continued last month in its fiscal second-quarter report.

LRCX earned $4.01 per share in the quarter, which beat the Zacks Consensus Estimate by 5.25% and improved upon the previous year’s $3.87.

Meanwhile, revenue of $2.58 billion eclipsed our expectations by 3.2%, while also improving 2.4% year over year and 19.3% sequentially.

The company has high exposure to the memory segment, which is poised for significant growth moving forward due to cloud computing, big data, mobile devices and the Internet of Things.

The quarter saw heavy demand for logic and foundry, which LRCX believes will continue moving forward. Furthermore, technological advancements, such as rising adoption of 3D architectures, will drive the performance of non-memory segments.

Over the past 30 days, earnings estimates have moved sharply higher for this year and next. The current fiscal year, which ends in June, is at $16.82, which has gained nearly 12% in the past month.

Shares of LRCX are up more than 80% over the past year. 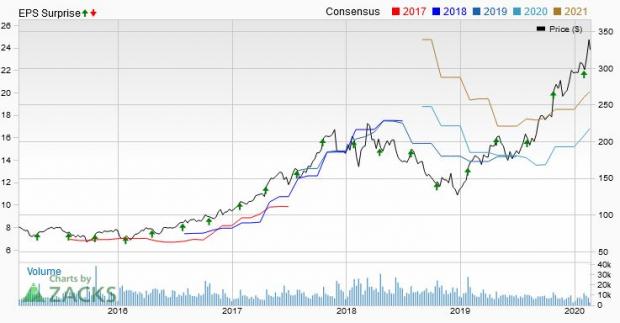 With Disney+ and Apple TV+ now launched and signing up tens of millions of subscribers each, Netflix (NFLX) is in trouble. Isn’t it?

And there’s even more competition on the way with HBO MAX, Peacock and whatever Viacom/CBS is thinking about.

As if that weren’t enough, Netflix only won two of the 24 Oscars it was nominated for. Can you believe it? That’s only 8.3%! It’s all over for the company. Right?

Well, not according to the analysts, who are expecting earnings to climb by more than 40% in 2021 over this year. That would be quite impressive for a company whose industry has changed so quickly.

Sure, times have changed, but Netflix has changed a lot too. It used to be the company that would send you the third disc from the second season of Frasier. (And it still does that, believe it or not!) But it’s also a tv network and movie studio that wins industry awards in both mediums.

The company still leads the pack with nearly 170 million paid subscribers across the globe. And while growth in the U.S. has been slow (due in part to its wild success), it still has a lot of potential internationally.

For example, it is launching low-priced mobile plans in India, Indonesia and Malaysia to expand its footprint in Asia Pacific.

Last month, Netflix reported fourth quarter earnings of $1.30, which was 333% better than the previous year and 150% atop the Zacks Consensus Estimate.

This marked the 8th straight quarter in a row with a positive surprise and an average beat of over 57% in the past four.

Revenue of $5.47 billion inched past our estimate and improved more than 30% from last year.

As good as these numbers were, a disappointing guidance for the first quarter kept the share price from rising. The company expects to add “only” 7 million paid customers, instead of nearly 8 million.

Nevertheless, analysts have been raising their earnings estimates on Netflix as they expect this streaming pioneer to remain a major player in the growing space regardless of all the new competition.

The Zacks Consensus Estimate for this year is up nearly 11% in the past 30 days, while next year’s has gained more than 5%.

Most impressively though, analysts expect earnings in 2021 to climb more than 40% from 2020! 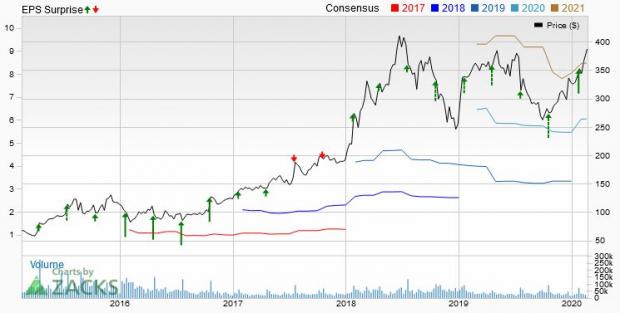 The homebuilders are feeling pretty good these days. And why shouldn’t they?

Interest rates remain historically low with no signs of rising in the near future. And the unemployment rate is also at a level not seen in decades amid a strong economy.

Earlier this week, the National Association of Home Builders’ monthly confidence index came in at 74 for February. That’s only two points off December’s reading, which just so happened to be the best in nearly 2 decades.

So confidence is still high for the space… and this is BEFORE the millennials really start looking to buy.

D.R. Horton (DHI) is one of the big names in the group that’s able to take advantage of the strong environment. It’s one of the leading national homebuilders that’s engaged in the construction and sale of single-family houses in entry-level and move-up markets.

The stock has surged 55% over the past year, which leaves its highly-ranked industry in the dust. The building products – home builders industry is in the top 15% of the Zacks Industry Rank with a rise of approximately 18%.

Earnings per share of 99 cents topped the Zacks Consensus Estimate by 7.6%. This marked the fourth straight beat with an average surprise of more than 10.6% over that time.

Most importantly, DHI has a lot of reasons why it expects a solid 2020, including its market share, acquisition strategy, land supplies, and affordable product offerings.

The company also offered a solid guidance for the future, including raising the higher end of its revenue and full year forecast for home sales. 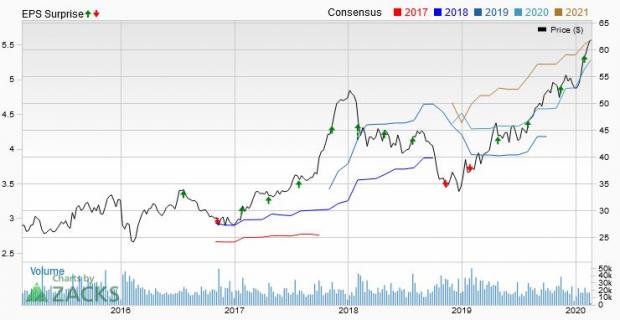 Value In The Cloud