Read MoreHide Full Article
Penumbra (PEN - Free Report) is a $5 billion medical technology company specializing in minimally-invasive instruments for neurovascular and peripheral vascular diseases.
The company leverages its expertise in catheter-based technology to develop access devices for treating strokes, aneurysms, deep vein thrombosis, pulmonary embolism, and other patient events caused by blood clots.
Penumbra takes its name from the shadow-like effect in pathology and anatomy where the area surrounding an ischemic event such as thrombotic or embolic stroke can become dark. Immediately following the event, blood flow and therefore oxygen transport is reduced locally, leading to hypoxia of the cells near the location of the original insult.
Based in Alameda, CA, Penumbra sells its products to hospitals and clinics primarily through its direct sales organization in the United States, most of Europe, Canada and Australia, and through distributors in select international markets. Sales are expected to grow 16% this year to cross $635 million.
I have a special interest in medical technology stocks with innovative devices and instruments. In my Healthcare Innovators portfolio, we have owned another fascinating and successful company making use of catheter technologies to replace heart valves, Edwards Lifesciences (EW - Free Report) . You can read more about EW in this recent article.
Buy PEN Under 10X Sales Every Time
I last wrote about Penumbra as the Bull of the Day in July after another stellar earnings report launched shares out of the April-May doldrums near $125. I had previously profiled the company in May and shared my thesis that this precision neuro-innovator should be on the shopping lists of Johnson & Johnson (JNJ - Free Report) , Medtronic (MDT - Free Report) or Abbott (ABT - Free Report) at this valuation, trading under 10X 2019's projected sales of over $500 million.
Shares made new all-time highs in July above $180, and then dropped to $130 into September, triggering my advice once again to be a buyer.
And sure enough, that was a great place to buy more PEN with new highs above $190 in February. Unfortunately, even with another great quarterly report on Feb 25, the coronavirus collapse took shares back down into my buy zone with a panic-driven spike through $125.
The good news is that following the plan has paid off again as PEN is back above $160 as investors pay attention to the growth story and analysts get busy raising their estimates.
Since their Q4 report, the full-year EPS consensus moved up 6% from $1.14 to $1.21. But the 2021 projection jumped 24% from $1.49 to $1.85.
Q4 Caps Off a Great 2019
Penumbra's fourth-quarter 2019 adjusted EPS of 22 cents surged 69.2% year over year. The adjustments exclude certain one-time asset-acquisition expenses and excess tax benefits related to stock-compensation awards. The reported figure also surpassed the Zacks Consensus Estimate by 22.2%.
On a GAAP basis, EPS came in at 27 cents, marking a 50% improvement from the year-ago figure.
Full-year adjusted EPS came in at $1.38, representing an advance from the year-ago adjusted figure of 18 cents. Also, the reported figure beat the Zacks Consensus Estimate by 55.1%.
Revenues in the fourth quarter were up 20.3% year over year (up 20.8% at constant exchange rate or CER) to $145.3 million, outpacing the Zacks Consensus Estimate by 2.6%.
Revenues for 2019 summed $547.4 million, up 23% on a reported basis (up 24.2% at CER). In addition, the revenue figure exceeded the Zacks Consensus Estimate by a margin of 0.7%.
On a geographic basis, quarterly revenues in the United States (representing 66% of total sales) grossed $96.1 million, up 19.1% from the year-ago quarter (same at CER). Meanwhile, international sales (34% of total sales) advanced 22.5% year over year (up 24.1% at CER) to $49.2 million.
Going by product category, revenues from neuro products grew 15.4% (up 16.1% at CER) to $85.4 million in the reported quarter. Revenues from peripheral vascular product business rose to $59.8 million during the October-December period, reflecting a jump of 27.9% (up 28.1% at CER) year on year.
After this report, Wall Street analysts kept Penumbra revenue estimates right near the top of the projected range at $635 million and next year moved up to $765 million, representing 20% growth. With these numbers, I hope I've convinced you to buy PEN on dips under $140.
And I'll forgive you for selling above $175 -- as long as you don't blame me if they get bought for $8-10 billion.
Free: Zacks’ Single Best Stock Set to Double
Today you are invited to download our latest Special Report that reveals 5 stocks with the most potential to gain +100% or more in 2020. From those 5, Zacks Director of Research, Sheraz Mian hand-picks one to have the most explosive upside of all.
This pioneering tech ticker had soared to all-time highs and then subsided to a price that is irresistible. Now a pending acquisition could super-charge the company’s drive past competitors in the development of true Artificial Intelligence. The earlier you get in to this stock, the greater your potential gain.
See 5 Stocks Set to Double>> 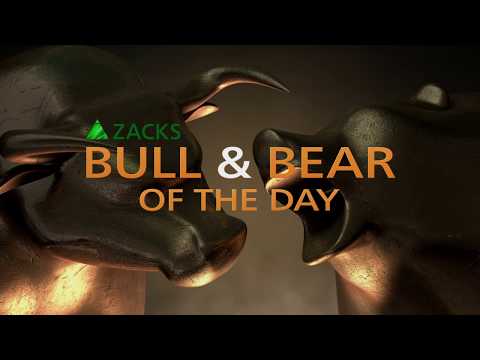