The company’s surprise record is pretty impressive with earnings beat in each of the trailing four quarters, the average being 27.65%. In the last reported quarter, Vertex delivered an earnings surprise of 39.89%.

Shares of Vertex have rallied 29.9% in the year so far compared with the industry’s 9.8% increase. 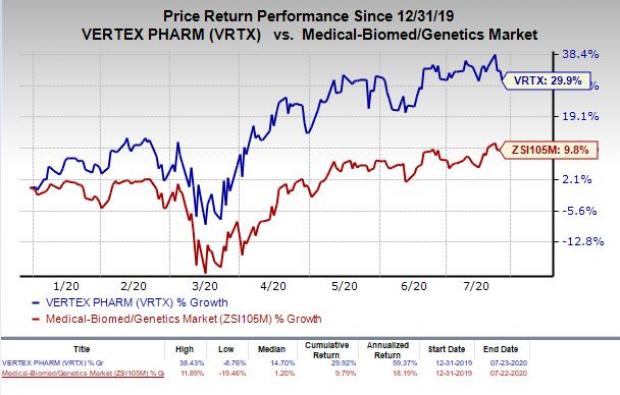 Sales growth in the last reported quarter was driven by a rapid uptake of the company’s newly-launched CF medicine Trikafta, a trend that most likely continued in the second quarter as well.

In fact, first-quarter sales of Trikafta benefited from a few early refills by patients and an advanced purchasing by some ex-U.S. governments due to Covid-19 disruptions. However, this benefit is likely to have reversed over the course of the year. Moreover, since a high percentage of currently eligible patients is already on Trikafta, the sales growth rate might have been slower for Trikafta in the second quarter. Further, this momentum is also expected to be carried in the remaining quarters of 2020.

In June, the European Medicines Agency’s (EMA) Committee for Medicinal Products for Human Use (CHMP) rendered a positive opinion recommending an approval for the company’s triple combination cystic fibrosis regimen, Kaftrio. On getting a nod in the EU, about 10,000 new patients with one minimal function mutation and one F508del mutation will be eligible to be treated with Kaftrio.

In the EU, a regulatory application for Trikafta (known as Kaftrio) is under review with an approval expected later in 2020.

The strong adoption of Trikafta resulted in the sales erosion of Vertex’s other CF drugs and its existing combinations, namely Kalydeco, Orkambi and Symdeko. In the last reported quarter, all the other three CF medicines saw a year-over-year decline in sales, a trend that most likely continued in the to-be-reported quarter as well.

Meanwhile, higher international revenues owing to a strong patient uptake of Orkambi and Symkevi following the completion of reimbursement arrangements in key ex-U.S. countries like England and France in 2019 might have boosted the company’s sales in the second quarter

Notably, in the last reported quarter, management stated that the COVID-19 pandemic prompted some CF centers to limit their non-emergency interactions with patients, which might impact the rate of future treatment initiations. As a result, this could limit the uptake of the company’s CF medicines in the near term. We expect an update on the same at upcoming earnings call.

Our proven model does not conclusively predict an earnings beat for Vertex this time around. The combination of a positive Earnings ESP and a Zacks Rank #1 (Strong Buy), 2 (Buy) or 3 (Hold) increases the odds of an earnings beat. But that is not the case here as shown below.

Here are some biotech stocks with the right mix of elements to beat on earnings this season:

ACADIA Pharmaceuticals Inc. (ACAD - Free Report) has an Earnings ESP of +8.12% and a Zacks Rank #3 at present. The company is scheduled to release earnings results on Aug 5.

Exact Sciences Corporation (EXAS - Free Report) has an Earnings ESP of +6.69% and a Zacks Rank of 2, currently. The company is scheduled to release earnings results on Jul 30.

Emergent (EBS) to Report Q2 Earnings: What's in the Cards?