Revenues of $137.3 million surpassed the Zacks Consensus Estimate of $131 million. Notably, the figure advanced 8.6% sequentially and 26.7%from the year-ago quarter.

The top line was driven by solid demand across data center and telecom markets. Further, healthy demand condition across industrial and defense market remained a tailwind.

Notably, shares of the company have surged 7.5% in the pre-market trading owing to better-than-expected fiscal third-quarter results and positive outlook for the fiscal fourth quarter.

Notably, MACOM has returned 60.3% on a year-to-date basis compared with the industry’s rally of 2.8%. 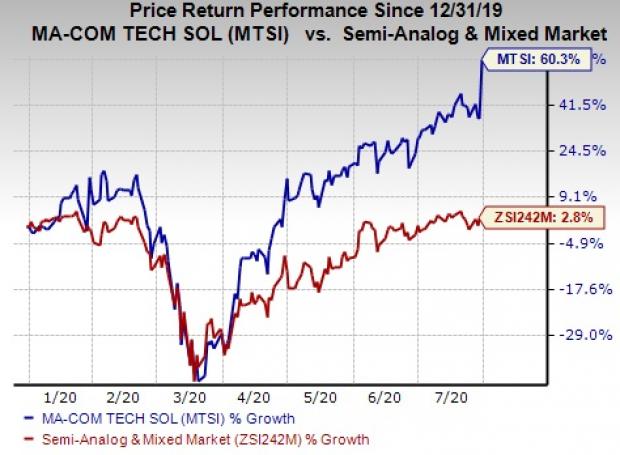 Data Center Market: This market generated revenues of $32.4 million (23.6% of total revenues), which improved 21% from the prior quarter.Growing proliferation of cloud services benefited both domestic and international deployments of the company during the reported quarter. Moreover, its high-performance analog product lines remained major positives.

In third-quarter fiscal 2020, non-GAAP gross margin was 55.5%, which expanded significantly from 39.4% in the year-ago quarter.

In the reported quarter, non-GAAP operating expenses were $46.9 million which declined 27.7% year over year. As a percentage of revenues, the figure contracted significantly from 59.9% in the prior-year quarter to 34.2%.

Consequently, the company’s non-GAAP operating income was $29.3 million against operating loss of $22.3 million in the year-ago quarter. Further, operating margin was at 21.4% in the reported quarter.

Adjusted EBITDA was $36.4 million against ($15 million) in the prior-year quarter. EBITDA margin was 26.5% in the fiscal third quarter.

Long-term debt obligations, excluding current portion, were $652.9 million in the fiscal third quarter compared with $653.7million in the previous quarter.

Cash generated from operations was $34.1 million, up from $25.3 million in the last quarter.

Further, the company’s free cash flow in the reported quarter was $30.4 million compared with $20.5 million in the prior quarter.

For fourth-quarter fiscal 2020, MACOM expects revenues between $144 million and $148 million. The Zacks Consensus Estimate for revenues is pegged at $133.3 million.

Further, the company’s adjusted earnings per share is anticipated in the range of 36 cents to 40 cents. The Zacks Consensus Estimate for earnings is pegged at 22 cents per share.

Moreover, non-GAAP gross margin is anticipated in the range of 55-57%.

Dropbox, Benefitfocus and Analog Devices are scheduled to report earnings on Aug 6, Aug 5 and Aug 19, respectively.

Long-term earnings growth rate for Dropbox, Benefitfocus and Analog Devices is pegged at 32.51%, 30% and 13.33%, respectively.