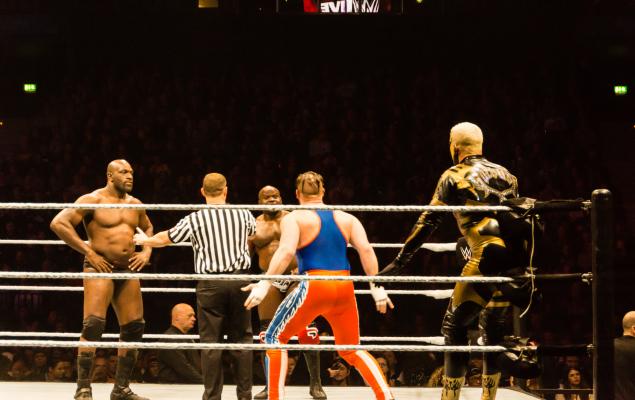 Management informed that the coronavirus outbreak and related government mandates to cancel, postpone or relocate its live events since mid-March have hurt the company’s business. Nonetheless, the company has undertaken necessary steps such as short-term cost reductions and cash flow improvement actions to address the challenges related to the pandemic.

We note that shares of this Zacks Rank #3 (Hold) company have risen 3.5% compared with the industry’s rally of 32.5% in the past three months.

This Stamford, CT-based company reported adjusted earnings of 45 cents a share that comfortably surpassed the Zacks Consensus Estimate of 15 cents. The quarterly earnings also exhibited a sharp improvement from 11 cents a share earned in the prior-year quarter. The company’s bottom line was favorably impacted by lower operating costs, decline in marketing and selling expenses, and lower effective tax rate.

WWE’s revenues of $223.4 million declined 17% year over year and fell short of the Zacks Consensus Estimate of $228.9 million. We note that lower revenues from Live Events and Consumer Products business segments were partially offset by higher revenues from the Media segment.

Total adjusted OIBDA came in at $73.5 million, substantially up from $34.6 million in the year-ago period. Meanwhile, adjusted OIBDA margin expanded to 32.9% from 12.9% in the prior-year quarter.

Notably, management is strengthening and expanding WWE Network through creation of new content and implementation of programs that will have higher customer attraction and retention power. Further, the introduction of new features, expansion of distribution platforms and foraying into new regions will aid the drive. The company is also increasing the monetization of WWE content worldwide. On WWE Network, the company created new content highlighted by the critically acclaimed series, Undertaker: The Last Ride. Also, WWE and A&E expanded their partnership and announced a new series The Quest for Lost WWE Treasures.

During the quarter under review, the company produced more than 600 hours of content for its television, streaming and social/ digital platforms. Recently, WWE launched the free version of WWE Network, unlocking a vast portion of its content library with more than 15,000 action-packed WWE titles now available for free.

Media Division: Revenues from the Media division increased 2% to $200.1 million owing to the rise in core content rights fees on account of the renewal of the domestic distribution agreements for flagship programs, Raw and SmackDown. This was offset by the timing of the large-scale event, Super ShowDown, which was held in February 2020 compared with June 2019 in Saudi Arabia. The timing of the event impacted other media and advertising and sponsorship revenues.

Notably, core content rights fees advanced 93%. However, we note that other media revenues plunged to $4.5 million during the quarter under review from $57.3 million in the year-ago period. While advertising and sponsorship revenues fell 30%, network revenues declined 5%.

The number of average paid subscribers fell 1.5% year over year to approximately 1.66 million. WWE Network ended the quarter with 1.69 million paid subscribers, reflecting an increase of 6%. Digital video views rose 10% to 9.9 billion, and hours consumed jumped 15% to 374 million across digital and social media platforms. Engagement on the streaming service, as measured by video views, surged 66% year over year.

Live Events: Revenues from Live Events came in at $1 million, sharply down from $48.8 million in the year-ago period owing to the absence of live events and a corresponding fall in ticket sales in North American and international markets. The government mandated cancellation and/ or relocation of events in the wake of COVID-19 outbreak resulted in the staging of 53 less events in North America and 23 less events in international markets. We note that the company’s ability to stage events in the presence of fans was persistently impacted due to public health concerns and government protocols.

Consumer Products Division: The segment’s revenues were $22.3 million, down from $23.1 million in the year-ago period. This can be attributed to fall in sales of merchandise at the live event venues owing to the absence of all ticketed-audience events. Nonetheless, this was largely mitigated by higher sales at the company’s e-commerce site — WWE Shop. The metric nearly doubled to $12.6 million.

WWE ended the quarter with cash and cash equivalents of $424.6 million, short-term investments of $123.3 million, long-term debt of $21.9 million and stockholders’ equity of $345.5 million. To enhance liquidity, the company has drawn $200 million from its revolving credit facility.

The company incurred capital expenditures of $7.1 million and generated free cash flow of $67.7 million during the quarter under review. The company paid $9.3 million in dividends during the quarter. Also, management hinted at resuming share repurchases under its $500 million share buyback program, which was temporarily suspended in April 2020.

E.W. Scripps Company (SSP - Free Report) has a Zacks Rank #2. Shares of the company has surged 50.5% in the past three months.